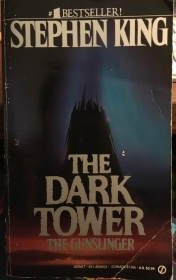 I am on a crazy reading kick these days. I don’t think I’ve finished this many novels in such a short period of time since college. The main difference? This time they’re all books I want to read. They also all happen to be written by Mr. Stephen King.

As anyone paying attention to UM will notice, I listened to Joyland and Revival which launched me into reading Mr. Mercedes (mostly on my phone, but I also got a hard copy from the library). After that, I was curious enough to jump into a realm I have very little experience and interest in: fantasy. Yup, I read The Gunslinger.

Going in I knew just a few things about this book. First, it’s the beginning of an epic series King wrote over decades that brings in various characters and ideas from his other books. Second, my buddy Sean didn’t like how it ended. And third, Marvel made a bunch of comics based on the main character, Roland the Gunslinger. It’s about the last Gunslinger chasing the mysterious and supernatural Man in Black across a big desert and presumably someone wants to get to this tower.

So, how did I take to it? Honestly, not very well at first. First off, Roland starts out as an incredibly boring character to read about. He’s basically just a car engine that keeps chugging across this place that shouldn’t really exist. Why are there random weirdos living in a place where no one should live? Well, because Roland needs to stop off and remember that time he killed a whole town, duh. That all smacked of a writer presenting a world that he created ONLY to present the story he was about to tell which feels sloppy. Then again, King was a young guy when he typed this all out on the green paper he mentions in the afterward, so maybe some allowances should be given. 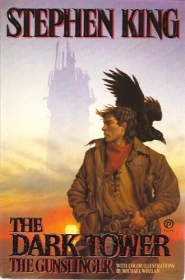 It wasn’t really until the second-to-last story “The Slow Mutants” that I realized I was hooked at least for one more book. In that section we learn more about Roland as a teenager and a bit about what went into him becoming the last gunslinger. That was the first time I was actually curious about him as a character. It also added to the overall mythology with places that seem familiar now, but are out of place to the world the story takes place in. Those bits hint at a Thundarr The Barbarian or Planet Of The Apes-style situation I’m at least semi-interested in.

Here’s the deal though, I’m far from sold on investing my time and money in an eight book fantasy series. As it happens, I have the second installment already here, so I’ll get to that one eventually. Mainly, I’m curious to see how the characters in King’s other books come into play in this series, but if my interest wains when I finally get to the second book, it’s very likely I’ll just read about them on Wikipedia or the wonderful fan site The Derry Connection. After this one I read Dolores Claiborne and will post about soon. From there I moved on to “The Langoliers” in Four Past Midnight and hope to jump on Gerald’s Game when it comes in the mail in the next few days.