I found myself with another pile of trades from the library recently and figured I’d write about all four of them. Two of the experiences were great, the others? Not so much. Let’s start with the good!

I’m a big proponent of anthologies in comics. At their best, they’re a great way to both test new talent and also give those with a lot more experience the chance to write or draw a character they don’t otherwise get to spend much time with. Sensation Comics Volume 1 does both and to great effect. This is one of DC’s digital-first books that allows creators to just go wild telling whatever kind of Wonder Woman story they want to from any of her many eras. It was nice to see the pre-New 52 costume so many times for this fan of that bygone era!

Personal highlights for me included Gail Simone and Ethan Van Sciver’s story that pits Diana against Batman’s rogues gallery and Sean E. Williams and Marguerite Sauvage’s take on Wonder Woman as the leader of a rock band and Corinna Bechko and Gabriel Hardman’s one where she goes to Apokalips and only barely makes it back. Those just happen to hit the right buttons for me, but the book also contains the immense talents of Gilbert Hernandez, Dean Haspiel and plenty of others.

To put it another way, this volume has something for pretty much any comic fan. You’ve got all kinds of creators working in a variety of styles to tell stories that showcase what’s best about Wonder Woman: she’s strong, she’s brave, she’s loyal and she’s compassionate. That’s what we all love about the character and what keeps us coming back for more. 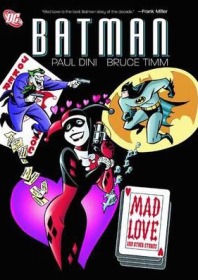 That brings us to one of DC’s less stable, yet still very entertaining characters: Harley Quinn. It recently ocured to me that I’d never actually read her first comic appearance: Mad Love by Batman: The Animated Series masterminds Paul Dini and Bruce Timm. That brought me to request Batman: Mad Love And Other Stories which doesn’t so much showcase Harley stories as ones done by Timm and Dini.

Mad Love is one of those stories that just puts you in awe of these creators and how much of a handle they had on these characters. If you’re a fan and haven’t listened to Dini’s appearances on Kevin Smith’s Fat Man On Batman podcast, I highly recommend them. He really digs in and explains how they approached many of the villains, especially Harley, who they created. This story shows why it will never work between her and the Joker, but also why she’ll probably never stop trying.

There’s a few other interesting stories set in that era of the DC Animated Universe, but my personal favorite is at the end and comes from The Batman Adventures Annual #2 which teams Batman up with The Demon to take on Ra’s al Ghul. This one also features artwork by Glen Murakami who also worked on the series. He and Timm combine for a more Kirby and Toth-inspired take which is just a ton of fun to flip through. As an added bonus, every story has some commentary by Dini and/or Timm which makes this a great collection for fans of the animated series and its creators.

Unfortunately not all of my recent reading experiences have been great and it just so happens the bad ones both come from the New 52 and creators whose work I’ve really enjoyed in the past. I tried the first volume of Justice League 3000 by Keith Giffen, J.M. DeMatteis and Howard Porter (who each worked on iconic eras of the JLA’s history). This one’s set in the future where new versions of Superman, Batman, Wonder Woman, Green Lantern and Flash have been created and the big mystery is why they don’t have their memories or all of their powers. Apparently they thought that the mystery would be enough to keep people interested because that’s about all that’s going on here aside from a bunch of characters who hate each other constantly arguing. It’s exhausting and not the kind of book I want to read (it’s also a sorry excuse for conflict if you ask me) and yet another example that the New 52 is a dark, dour place even in the 31st century. For what it’s worth, I like this new evolution of Porter’s style, which is the only reason I even flipped through the second half of the book instead of just putting aside altogether.

The other book I didn’t enjoy very much was Will Pfeifer’s take on Teen Titans with one of my favorite current artists Kenneth Rocafort. This one doesn’t suffer from the darkness that seems to eclipse the DCU, but instead a bunch of characters that are never really set up. This was the launch of a brand new series (even if it continued many characters from the previous volume) and yet you never get an understanding of who these young heroes are, why they do what the do or why they’re even a team. I’ve been confused about Red Robin from the beginning of New 52, have no idea where Wonder Girl game from or what Robin’s deal is. Those aren’t treated like mysteries to be solved here, they’re just completely ignored which is too bad. If I can’t get a handle on the characters’ motivations, wants or desires, I can’t really care about villainous machinations, though it was cool seeing new versions of Manchester Black and Josiah Power. Why they didn’t just call the villain Ladytron though is beyond me as that’s exactly who she looked and acted like. Maybe she comes back as such, but I won’t be around to see it unless I want to look at Rocafort’s delightful style and compositions without diving into the story. That’s the great joy of getting these books from the library: I can test drive before committing more time and any money.