While reading the intro to my copy of Dolores Claiborne, I saw that Gerald’s Game acts as a kind of companion novel. So, being a bit of a completest and possibly a crazy person, I picked up a copy along with Bag Of Bones and Green Mile on eBay.

I’ve got to say, compared to all of the Stephen King books I’ve listened to or read since getting on this kick starting with Joyland, Game proved to be the hardest one to get through. I might not have been the biggest fan of The Gunslinger, but at 250-ish pages, I was still able to knock it out pretty quickly. The same could not be said for Gerald’s Game, but I was very happy I stuck with it.

Here’s the deal with this one. A woman named Jessie and her husband Gerald head to their cabin on the lake in the fall for a quick bit of marital alone time that involves her being chained to the bed with handcuffs. No longer into the whole idea anymore, Jessie wants out but Gerald refuses to listen, so she kicks him in the chest causing him to have a fatal heart attack. That leaves Jessie alone to figure out a way to get out of the cuffs while voices from her past come to life in her head, horrible memories bubble to the surface, a dog sneaks in to eat her dead husband and she thinks she sees a fiendish ghoul in the corner of the room.

In other King books like Under The Dome and ‘Salem’s Lot he goes on tangents featuring different characters that ultimately make a lot of sense and play a part in the story. Unfortunately, that’s not the case with the first half of Gerald’s Game. You’ve got this crazy story filled with intrigue and curiosity — how will she get out? what did her dad do to her? what’s this going to do to her if she gets out? — and yet it takes a bit too long to actually get into that territory.

In other words, a bit more brevity early on would have been greatly appreciated (like, do we really need to spend SO MUCH time with the dog?). I also admittedly had a hard time picturing many of the positions Jessie found herself in thanks to the cuffs, but blame my own lack of imagination and poor reading comprehension for that. As such, the scenes like the one where she’s trying to get a glass of water fell a little flat even though I understand that finding drama in the smallest things as sanity and reality fall to the wayside is the point of the story to an extent.

With this incredibly slow beginnig, I  thought about quitting a variety of times. I’m itching to get to The Stand, but I wanted to power through, especially because this had a great deal of connections to Dolores which I had a wonderful time with. So, I picked it back up a few days ago and tore through the second half which finally gets into the past elements, how she attempts to break free and a-whole-nother element I did not see coming. Man, that stuff is gripping!

So, here’s my theory: I think King might get into the minutiae so heavily, not just 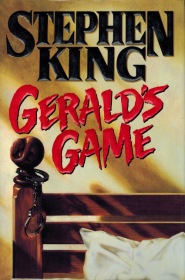 because the situation dictates that something as simple as getting water becomes dramatic, but because he wants to put the reader through something long and potentially tedious so they can relate to Jessie even more. Her connection to reality slips away further and further the longer she’s stuck in her unbelievable situation and maybe reading through nearly 250 pages of that sucks you into a head space where you can slightly relate. That may just be me trying to figure out why the first part didn’t get a 50 page cut in the editing process, but who knows? As I mentioned, this one really heats up towards the end which sucked me right back in. I’m not sure if the journey will be worth it to everyone, but it paid off for me.

With that all out of the way, let’s get into what I call some King Connections. The first thing I though of when I heard of this book was that it sounded like a play on Misery, but if the captor died. Here’s a few other quickies. First, I’ve noticed a lot of characters in King books have pooched out lips. Second, Jessie and her friend Ruth attended New Hampshire University in the 70s, as did Joyland star Devin. I bet they hung out under the stairs in the same fake professor’s office. And a few more quick hits: Jessie drives a Mercedes as does the killer in Mr. Mercedes and a dog breaks the assumed rules between man and man’s best friend as I assume happens in Cujo.

And then there’s all of the connections to Dolores Claiborne. Both main female characters appear in each others’ books. They also both experience major, life-altering trauma during an eclipse. More than that, both books revolve around the nonsense that women have to deal with in a world run by men. Jessie actually benefits from it in her post-freedom situation. Bad guys in power situation as fathers also play huge parts in both stories. Both lead women also have fellow women in their lives who refer to them as high-riding bitches (or something like that).

Finally, and this is mega SPOILER territory, but I really got to thinking about the mysterious figure Jessie saw in the the room with her. I found my mind going to the vampires from ‘Salem’s Lot or maybe some creature falling out of the Dark Tower world, but it turned out to be Raymond Andrew Joubert, a human monster murderer who just stood there and watched her. At first I wanted him to be a supernatural force, but became more and more okay with the story as presented and found it one of the many second half elements that turned me around with the book.

With this one out of the way, I’m jumping into the expanded version of The Stand which is enormous and may take me five years to read so wish me luck.