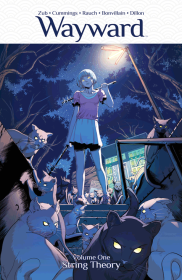 Back when I started working for CBR, I covered Image Comics. It was a wild time when new creators were rolling in and producing these great creator-owned books. A lot of them have gone on to work at Marvel where I now interview them for that company’s website. I’ve since switched beats and now cover BOOM! Studios and IDW so I’ve lost touch with some of the books that everyone’s talking about and digging like Wayward and Descender.

I’ve talked to Wayward creator and writer Jim Zub a bunch of times for Skullkickers and his Marvel work, but had missed out on this book but I’m glad I started catching up! Drawn by Steve Cummings, this series follows Rori Lane, a young woman who moves from Ireland (where her dad’s from) to Japan (where her mom lives). Once there, she starts seeing weird red paths and drawing kanji that do crazy things to people. Right after moving, she meets a cat girl named Ayane, a spirit eater named Shirai and Nikaido whose powers have yet to be explained by the end of the first volume, which collects the first five issues.

Still in early days, I have very little idea what’s going on in Wayward, but I love being along for the ride. I like these characters, I’m curious about who they are and how they got these powers and want to know what the deal is with these monsters who keep popping up. Plus, that cliffhanger ending at the end of five is a fantastic way for me to pick up the next book and see where it goes! 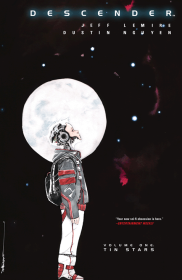 Another Image book I’ve been very excited about getting on board with is Jeff Lemire and Dustin Nguyen’s Descender. I saw a lot of the covers and artwork popping up on Twitter and was just stunned. Nguyen’s one of those artists with a stunning style that stands out as super unique to my eye and the Lemire books I’ve read have all stood out in my mind.

This book takes place in a sci-fi future where a series of planets have joined forces to created the United Galactic Council. The union thrived until massive robots dubbed Harvesters appeared, caused huge amounts of destruction and lead to mistrust of robots.  Ten years later, the supposed father of modern robotics Jin Quon gets picked up by a pair of UGC soldiers who need him to help them figure out how the cyber-DNA (codex in the story) of a surviving companion robot known as TIM-21 matches that of the Harvesters. They head out to pick him up, but find themselves far from the only ones.

Again, I don’t want to get into too many of the details, but I love how Lemire and Nguyen have built this unlikely team that also includes a human-hating mining robot and a dog robot. There are tons of mysteries here waiting to be explored, but also more clear and present dangers that need to be dealt with so everyone can keep their heads. I am so down for the next volume and it’s exciting to be this stoked about two new comics from great creators.