I realized after watching the wonderful An American Werewolf In London recently that my horror-comedy knowledge is pretty weak. I’m actually struggling to think of any non-Scary Movie entries that I’ve seen (which are really more “comedy”-horror and also terrible) besides Shaun Of The Dead, Joe Dante’s movies and Cabin In The Woods to some extent. Well, as it happens, I’ve seen a handful so far this season and have had a fair amount of success.

Aside from Werewolf, the most successful horror-comedy I’ve seen so far has been Eli Craig’s Tucker & Dale Vs. Evil starring Tyler Labine and Alan Tudyk from 2010. This one revolves around a pair of buddies from the south heading to their recently purchased vacation cabin in the woods. While on their way there, they happen to meet a bunch of college kids who are vacationing in the same area. Thanks to the kids’ anti-country folk assumptions, they believe that our heroes are actually murderous backwoods baddies. When Alli (Katrina Bowden) accidentally gets hurt and they take her in, the kids get even more concerned.

The beauty of this film is that it works so damn well for horror fans. The more time you spend with Tucker and Dale, the more you start to see where the story is going. Everything they do — all practical given their situation and circumstances — can be misconstrued as a familiar horror trope. But, even though you can see what the kids might misunderstand ahead of time, it doesn’t take away from what actually happens because it’s a bit more over-the-top and bloody than even I expected.

Also, like with AWIL, I found myself really liking these characters and wanting them to be alright in the end. I think it’s also important that the film shows a group almost constantly shown in a bad light in a good one. Hopefully next time I’m driving through the woods at night I’ll think more of these guys than Leatherface and his kin. 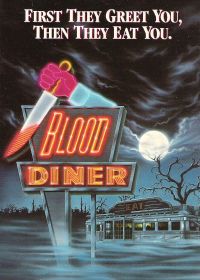 While Tucker & Dale works within many of the expected constructs of a certain kind of horror film, Jackie Kong’s Blood Diner is an absolutely bonkers ride that I had a ridiculous amount of fun with.

This one from 1987 is about a pair of brothers who run a vegan diner, but serve their customers human meat. That’s not really the plot, though, as their main goal is to commune with the brain of their dead uncle to figure out a way to rebuild the goddess Sheetar and bring her back to life.

I can’t really explain this one, even though I’d like to. There’s a massacre during the filming of a topless exercise video, a rival diner owner whose best conversation partner is a dummy and a punk-filled finale at a club that has to be seen. I’m sure it won’t hit with everyone, but I think if you like the tone and humor of this trailer, you’ll probably dig the movie.

This one’s as crazy and over the top as possible and it’s fantastic. Lionsgate used it and Chopping Mall to kick off their Vestron Video Collector’s Series which means it’s absolutely jam packed with highly watchable special features starring everyone from Kong on down. I highly recommend getting your hands on this and watching it front to back.

Much like the variety that comes within the confines of the horror genre, I love how broad the horror comedy genre can be. Tucker & Dale represents a smartly written and presented look at both horror movie conventions and cultural assumptions while Blood Diner just goes over the top with craziness that might — let’s say probably will — offend some viewers, but I get the feeling it’s all done in the sense of fun and satire. I’ll cover a few more of these types of horror comedies before the month is over and maybe a few others!