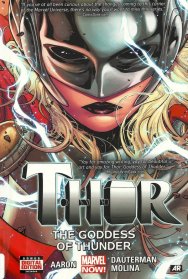 Much like Scott Snyder, Jason Aaron is a writer I’ve become a big fan of in the past few years. I haven’t finished his initial Thor: God Of Thunder run just yet, but I did finally check out the wild Original Sin and have now read the first run of Thor starring the Goddess of Thunder!

The first book — aptly called The Goddess Of Thunder — picks up after Original Sin, which saw Nick Fury whisper something in Thor’s ear that rendered him unworthy of picking Mjolnir. Even Odin fails at lifting the weapon of uru, so it’s even more surprising when a woman succeeds where they failed just in time to stop some ice giants lead by Malekith from destroying a Roxxon facility. Odinson also jumps into the fray, but loses an arm to Malekith that’s soon replaced by one made of uru. He uses his new appendage to assist the new Thor. By the end of the confrontation, he not only gives her his blessing but also his name!

Moving into the second volume dubbed Who Holds The Hammer?, Thor must deal with the crankiest old guy in the cosmos: Odin. Wanting to keep things the way they’ve always been, the cantankerous coot sets the Destroyer after her. Luckily, just about every awesome lady in the Marvel U and Odinson appear to back her up in her fight, which Odin eventually concedes.

Meanwhile her secret identity remains one even to the watchful eyes of gods much to Odin and his son’s chagrin. The reader discovered the identity (read the below paragraph if you want it spoiled). An annual and the reprints of a What If? issue round out the second collection.

Okay, let’s frame this in a big old SPOILER WARNING. This entire arc spends time protecting the identity of this new Thor who turns out to be Jane Foster. Keeping this such a prolonged secret reminded me of when Red Hulk appeared and we weren’t supposed to know it was Thunderbolt Ross. Now, I worked at Wizard at the time, so I had some inside dirt. Not so much with Thor and yet, I never thought for a moment that it wasn’t Jane Foster. I see where Aaron went and how he tried to throw us off base, but maybe some pre-known knowledge about her identity (or my keen eye for story?) cut that off at the knees a bit. That’s not Aaron’s fault of course, but I wonder if focusing on it so much was worth the time instead of just diving into it, but that’s me thinking as someone reading a trade and not the writer of a monthly book!

And yet, I still loved these issues. They work on their own, but become even more interesting when you go back and read all the other Aaron stuff leading up to it (which I’m doing now and will write about soonish). Aaron’s talents continue to impress, but Russell Dautermann really jumped off the page at me. It’s not always easy to render characters who look equally at home in the halls of Asgardia and amongst super heroes, but he excels at it in all ways. I can’t wait to finish up the books that preceded this one and then move on to what came after Secret Wars!