As I mentioned in my Halloween Scene 2019 kick-off post, I’ve decided to stick to Vertigo comics this scare season. The reason for that is two fold. First, the imprint was officially shuttered earlier this year and second, I was already pretty close to finishing up House Of Mystery.

My own relationship with Vertigo has been interesting over the years. I had a vague sense of it growing up and definitely knew a few Sandman-loving guys in my high school who went so far as to wear ankhs around their necks, Death-style. I was a super hero guy, though, so I didn’t dip into that pool much. That is until I started hearing about 100 Bullets in Wizard. That got the ball rolling. Once I fell for Brian Azzarello’s writing, I followed him around to other books including Hellblazer.

It didn’t take long to realize that there was plenty of room in my life for Superman and John Constantine, so I began expanding my horizons. Since then, I’ve come to realize that Vertigo played home to some of my all time favorites including Preacher, Y: The Last Man and, of course, Sandman. Before Image became what it is now and all these other comic companies came on the scene, Vertigo was THE place to get weird, wild stuff that would expand your mind and challenge your senses on a regular basis, especially if you didn’t have access to underground comix. 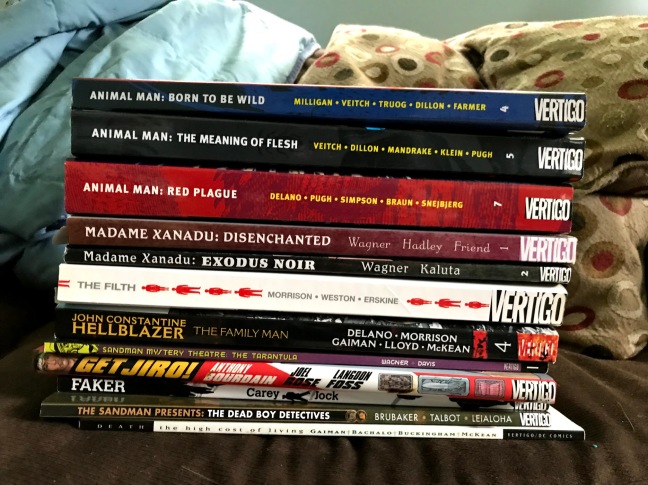 When the idea hit to focus on Vertigo comics this Halloween, I had a great time digging through my To Read boxes and shelves for material to go through. I’m definitely thinking of re-reading Preacher and Sandman in the near future, but don’t want to monopolize the whole season with those books. So, I’m trying a mix of old and new books.

As you can see from the pic, I’ve given myself a pretty deep pool to dive into. You’ve got the more real world 30s street level craziness of Sandman Mystery Theatre, the magical Madame Xanadu, Grant Morrison’s mad The Filth and the post-Morrison Animal Man series, which scared me as a kid. I’ve also gotten my hands on a copy of Judd Winick’s Blood + Water and Mike Carey’s God Save The Queen and The Faker. I might even pull out the Vertigo Visions one-shots I have, finally read Alan Moore’s V For Vendetta and/or Swamp Thing or go totally off book and explore some other dark corners.

If you’re curious what I think about Vertigo comics like The Books Of Magic, Black Orchid, Children’s Crusade, Death: The High Cost Of Living and Hellblazer: Pandemonium, you can listen to the episode of The Midnight Comic Club I did on those a few years back.