Do you ever keep hearing about an author so many times that reading their books just seems like a delightful inevitability. That was kind of the case with Grady Hendrix. I remember his early fiction books getting talked about on my favorite horror podcast, Shock Waves, and then he went on to appear on the show a few times (a bonus ep from May 2017 and episode 115 if you’re looking for specifics). Between those appearances and the time he showed up on Teen Creeps (episode 150), Hendrix quickly jumped way up on my radar of authors to keep an eye out for. Luckily, several of his books, including Horrorstor and Paperbacks From Hell soon showed up on the cheap digitally and I grabbed them both. I briefly wrote about the former in my 2019 year end list, but now it’s time to talk about Paperbacks…and what it’s lead to. 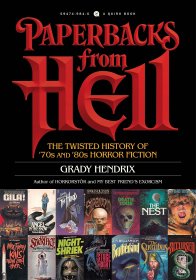 Paperbacks From Hell, which was penned by Hendrix with assistance by Too Much Horror Fiction writer Will Errickson, is a non-fiction recounting of the horror paperback boom that ran through the 70s, 80s and partially into the 90s. From there, most of the chapters are broken up into subgenres with the author offering some context as to why, say, killer animal or haunted house books became so popular when they did. He then goes through some of his favorites with a hilarious tone that doesn’t shy away from poking fun at some of the more ridiculous plots and even calling out some bad actors in the bunch, while still praising the writers of the books as well as the amazing cover artists.

In a way, reading this book reflected my experience with the New York punk rock oral history Please Kill Me. This was a world that I was only somewhat familiar with, but I became so fully immersed that I was stopping every few paragraphs to add a new piece of art to check out in the ever-growing list on my phone (the Notes app is THE BEST). I have over 60 authors on that list and probably north of 100 books that I now want to check out. Said checklist is an excellent mix of novels that sound truly great and ones that need to be experienced on a weirdness level. Now all I want to do is comb through dusty used book stores and flea markets for these paper bricks of delight (probably not the best book to read in quarantine, though I have discovered Thrift Books as an excellent source of used tomes at a nice price). Oh and if you’re wondering, yes, the digital experience of reading Paperbacks was great, but I’ve got my eye out for a physical copy!

Both fun AND educational, Paperbacks From Hell is interesting in that it eventually tied into my first experiences with horror by way of 80s and 90s teen horror novels. By that point, the adult publishing world wanted major titles from big names like Stephen King or it-could-happen thrillers like Silence Of The Lambs (hey, I read that) instead of straight-up scare fair. However, kids still wanted to give themselves over to books about ghosts, killers, aliens, murderous puppets and the like (because we were rad, obviously). Christopher Pike and R.L. Stine were my favorite authors during that era, but I had no idea they and their fellow YA authors were the ones flying the horror flag the highest at that time.

In addition to going through Thrift Books’ stock and ordering some real wild sounding books (hopefully more on those as I read through them), I also started looking through Valancourt Books‘ incredible offerings. Focused on reprinting nearly forgotten books, the indie publisher has an entire Paperbacks From Hell imprint! When I first started on this journey, there were 10 books under that umbrella. Since then they’ve actually added a few more, most of which I’ve pre-ordered, including one that I literally found out about while writing this post! The first entry, though, was The Nest by Gregory A. Douglas (Eli Cantor’s pen name) which I bought physically as well as digitally when the company offered a deal on buying the first set in bulk.

In this book, a small Cape Cod island town called Yarkie finds itself overrun with mutant cockroaches that can not only systematically take human beings apart, but also communicate more like ants with pheromones making them wildly dangerous. If that’s a premise you can buy into (and what kind of monster couldn’t?) and you don’t mind reading about every possible denizen of a small island getting destroyed by bugs (yes, that includes animals and children), then I highly recommend checking out this book! Cantor deftly moves from scientific explanations and soapy romance to bloody evisceration and passages espousing the grit and quality of New England folks in such a way that I was always excited to be picking up what he was laying down!

Oh, and though it definitely sounds like it might be too Jaws-y with the townsfolk bringing in a pair of Harvard scientists to help figure out the issue, it’s not. I actually prefer the story told in The Nest to the one in Jaws (the book, I mean, which I didn’t dig when I listened to it) because the former doesn’t revolve around the gross economy of a tourist spot superseding the preservation of human life. The Yarkie group who knows what’s going on doesn’t make the news public, but does go a long way to at least attempt to keep its residents safe while gathering more information (they think rats are the problem initially). This book is totally nuts and gnarly, but it was exactly the kind of distraction I was hoping for given the disastrous state of the world. I’m also totally hooked on Valancourt’s PFH titles and want to get them all!

I love being able to support a small publisher and this series is already something I’m a big fan of so I’ve already pre-ordered the incredible-looking Stage Fright (the cover features a  skeleton playing a keytar!) as well as the PFH version of The Auctioneer. I’ve also ordered When Darkness Loves Us by Elizabeth Engstrom, the second Paperbacks From Hell reprint book, as well as Burnt Offerings which isn’t under that umbrella, but was mentioned in the original text and lead to one of my favorite film discoveries of last year! It’s fun to have something new to get into that’s not too far along that catching up feels impossible. It’s also really fun to be this excited about reading fiction again! Oh and if you want more Grady Hendrix in your life, you absolutely need to listen to his new podcast Super Scary Haunted Homeschool. It’s my new favorite podcast!