As anyone who was paying attention to UM in the fall will know, I plunged deeply into the world of horror for most of September and October. By the time I finished up the epic undertaking of It’s All Connected 2020, I took a break from watching a lot of horror movies throughout most of November, but kept on making my way through my daunting To Read boxes. To that end, I pulled out an old paperback I scored from the library’s free table several years ago as well as the next Paperbacks From Hell reprint from my favorite publisher Valancourt!

First up we have Clive Barker’s 1985 horror novel The Damnation Game. Though I made a point to watch most of Barker’s films last year, this is only the second of his books that I’ve read and the first that’s not a short story collection. In this one, a prisoner named Marty gets the strange opportunity to leave jail and go become the bodyguard for reclusive billionaire Mr. Whitehead who seems to be deathly afraid of something, but won’t tell his new employee what. Eventually we come to meet Whitehead’s daughter Carys as well as the source of his fear, Mamoulian, a being with strange powers who feels like his former apprentice owes him something grave. 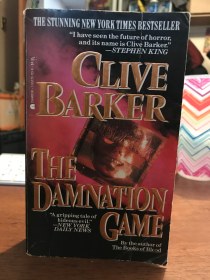 As I wrote that brief synopsis, I got excited about this story again. Here’s the problem, though, I didn’t really feel that while reading this 433 page book. We start off with some of the deep, dark horrors that I associate with Barker’s works, but then there are about 100 pages that focus on Marty adjusting to life outside of prison and attempting to reconnect with his old life before we get into the real meat of the story. It’s not like this section of the book is bad and it establishes the character, but it felt kind of wheel-spinny to me. At the time, I did not know this was Barker’s first novel, but while reading it felt like he was either trying to fill space or there was no real editorial presence to help shape the proceedings.

I feel conflicted about how I’m addressing this book. On one hand, the problem is mine because I don’t like feeling like I’m wasting my time on characters or stories that won’t ultimately matter. I had that idea running through my head, especially because this book took me a relatively long period of time to read. I was somewhat invested and liked where Barker eventually got, but even then I felt a bit let down by the story. We’re shown this world of evil with all of these titles and names, but most of them don’t even get explained (ie, what the hell is a razor eater?!). And yet, I think I enjoyed the experience as a whole now that my mind has distilled it into a memory instead of a work I actually worked through. What does that say? I don’t know, but it’s not like I’m going to abandon the Barker books I have in my To Read boxes and in my Kindle library. What do the Barkerheads out there think? Am I on or off base here?

I am much less conflicted with the Valancourt Paperbacks Form Hell reprint of Bernard Taylor’s 1980 book The Reaping. I loved it and tore through its 220 pages. In this one, the owner of an art shop by the name of Tom Rigby goes off to a strange old house to paint the portrait of a young woman named Catherine who he winds up having a passionate affair with. Though he becomes suspicious of the goings-on there, he ultimately leaves and gets back to his normal life. However, when Catherine shows up with a huge surprise and an even more wild story about what really happened at that estate, Tom has to figure out what his next step is, though some of the choice is taken away from him by nefarious forces!

Above, I mentioned the It’s All Connected project I undertook this fall where every movie I watched had to be connected to the previous one in some way or another. The way that shook out, I wound up watching a lot of British films set at weird houses just like this one (I’m looking at you House Of The Long Shadows, The House That Dripped Blood and even The Legacy) which helped lay some visual groundwork in my head for The Reaping. I don’t want to get too spoilery, but some of the other flicks I watched this season also helped inform the words I was putting in my head as the story gets pretty nutso at the very end. I’m still not sure how some of the mechanics of the finale work, but overall I had a great time witnessing a relatively stuffy Brit go from widower family man to baller artist, to red hot Romero to Rambo by the end!

Putting these two books in context with one another isn’t really that hard now that I think about it. Both have major scenes taking place on huge British estates. Both deal with what happens when those with power interact with those who have none. And, they both examine the nature of evil and how its pull can make people do different things. Of course, one is very long, the other quick as a whip and, as you might expect, Barker gets way more intense than Taylor, but ultimately reading these back to back taught me about using horror in prose and also the benefits and weaknesses of brevity.

Oh, one quick thing before signing off on this one. In the past year, I’ve acquired quite a few horror paperbacks as inspired by Paperbacks From Hell. Here’s the thing though, I’m a bit leery about reading some of these books with my kids around! The Damnation Game cover isn’t too bad, but I didn’t want to have to field any questions, so I headed over to etsy and picked up a cloth book cover (with bookmark) from a seller by the name of OurLittleMesses. It served me very well during the reading process and will hopefully do so in the future. The only downside? It doesn’t fit the Valancourt PFH books! They’re just slightly too tall! Ah well, I’ll get by.