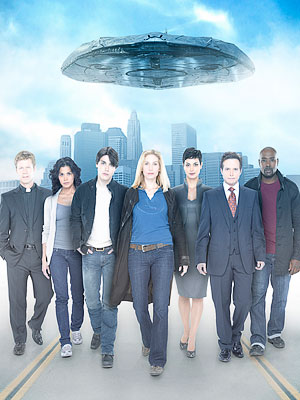 Em was a lot more excited for V than I was. I don’t watch a ton of science-fiction shows, I tried watching the original movie for Battlestar Galactica and was bored to tears. But considering how crappy the Tuesday night prime time line up, I was up for anything. And, for the most part, I dug the show. Not only does it feature Firefly alumns like Alan Tudyk and Morena Baccarin and Elizabeth Mitchell from Lost, but for the most part I was interested in the plot the entire time. I also thought the special effects on the space ships and giant spacecraft were all pretty cool. I liked the idea that the Vs had been there for a while and were acting like a terrorist group. I’m looking forward to seeing what the weird lizard aliens look like, how the world will find out they don’t have Earth’s best interest in mind and what will happen to Mitchell’s son character who is just too dreamy for words. So, what did you guys think?