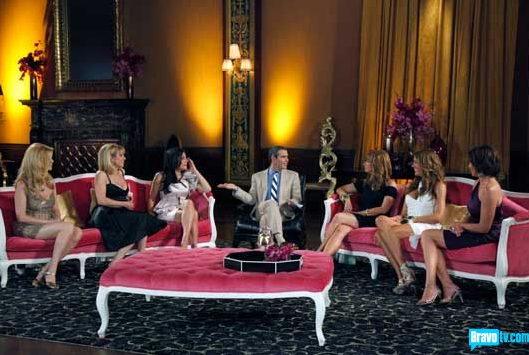 I’ve got to call bullshit, guys. After watching the first two parts of the three part Real Housewives of New York and now the third one, I’ve got to say there was absolutely no reason for this to be a three parter. I get that they might have had to focus in on people like Sonja and LuAnn who didn’t really do much of anything this season except try to be Sarah Jessica Parker and sing poorly respectively. I could see doing two parts, but three just dragged it all out, but, this third installment was full of the goodness.

And by goodness, I mean showing off that Kelly really is two–if not twenty–cups of crazy. The previous episode ended with Kelly running away. As the missus pointed out, she doesn’t look upset, it’s just like she figured that was the time for HER to get up and walk away. While she’s gone Bethenny, Sonja, Ramona and Alex are practically falling over themselves to call her out on her bullshit. Meanwhile, LuAnn’s just sitting there laughing at the whole thing.

Probably the most interesting piece of information given out this episode is that Kelly got SENT home from the island, escorted by a producer, according to Bethenny. That seems to make sense. However, once Kelly gets back on set, she makes the whole thing out to be a “poor me” situation with all these women ganging up on her. Then, she says that Bethenny didn’t cook while they were at the big house, but that someone else did and she took credit. Seriously? Look that shit up on the internet. SHE’S A CHEF!!! Kelly keeps the crazy train rolling by saying Ramona’s too much of a drunk to remember something that we’ve all seen on film. The truth of the matter is that Kelly never answers a question directly and continues to dance around the subject saying the same things: it was disgusting, women need to celebrate each other and this is a good example for her daughters and other people.

There’s even a whole section where Andy plays clips showing how contradictory she is. She supports PETA but then buys fur. She says she’s modest, then poses for Playboy. She says she doesn’t start drama, then causes crazy amounts of drama on the boat, the island and almost everywhere else she shows up. Yet, Kelly doesn’t see anything wrong with any of this. She also doesn’t accept that she might be a little off. The most forehead slapping moment, however, is when Kelly says that Bethenny, Ramona and Alex are unpredictable! Huhwha?! It gets better when she says that unpredictable people are dangerous. Oh heavens, me, I can barely handle this broad’s craziness. She’s the epitome of delusional.

The rest of the show zooms in on Jill getting “kicked off” the island. I like that Ramona came at her with “You should have come in humble” to which Jill later responds “Could I have come in more humble?” MORE humble? How about even slightly, remotely humble, lady? Jill’s delusion that simply saying “I’m sorry” wipes the slate clean leans towards sociopath territory for me. But, hey, I’m not psychologist and I’m probably using the term incorrectly.

Well, that’s about it. New York Housewives went from being a show that was really about something; these women dealing with their individual lives and how they interact with one another. It morphed so much this year, with people who used to be beloved becoming villains and vice versa, that I’m not sure what to believe anymore. Is Jill really the attention whore she seems like this season or is she the normal person she seemed in previous? Is Ramona the inappropriate, but down to earth person she was this season or the bitch she was earlier? Is Kelly out of her freaking mind? In the end, I don’t think I’ll be able to continue watching if it turns out that Jill really is the person she’s shown herself to be this season and Kelly remains as bat shit crazy as she is. We shall see, though. There’s still a “never before seen” episode and then we’re on a break for a bit while Bethenny gets married and has a baby on her own show, which, yes, we’re watching, but I’m going to hold off on blogging about until next week. Get ready for that!