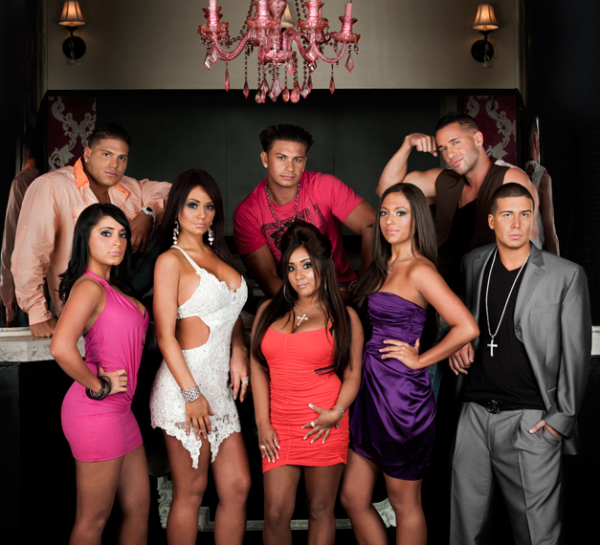 Man oh man. The season kicked off relatively slow with the usual scenes of everyone traveling down and getting to the house. The main pot-stirrer this season is Angelina, the cast member who left the show last year and is back now to try and get some of those Jersey Shore dolla dolla bills. And boy does she set people off, especially the ladies who all seem to hate her. Let’s just jump right into the live blog, because I know that’s what you really want. Pauly D’s rolling down from Rhode Island to pick up Sitch.

Snooki’s got a man she’s been dating for 2 months. They love sexual innuendo. He is, of course, “a gorilla juice head.”

Snooki thinks that Obama put the tax on tanning just to hurt them.

Haha, Snooki’s so short she has to move the seat up like crazy.

Pauly picked up Mike in the pouring rain.

Sammi and Ronnie are broken up as of now. I’m pretty sure this is exactly how the first season went down: Sammi acting like she’s the shit with her friends and Ronnie bragging to his friends about getting laid and them telling him to double bag it.

Vinny’s having a last dinner with the family. His uncles want him to go to Miami and bang everyone.

The missus thinks everyone got new cars. I don’t remember.

I do think it’s funny that MTV made them all drive down.

They don’t know that Angelina’s gonna be there too, but Pauly says he hooked up with her in LA.

Ugh. Why did they bring her back? She says all the girls were jealous of her.

Mike and Pauly buy a cart full of fireworks and go to a field to shoot them off. They get stuck. I just realized they showed a lot of this at the movie awards or something.

Haha, the AAA truck gets stuck, so another one has to come out and get both trucks out.

Snooki and JWOWW stop off in Georgia and hit up a country bar. Snooki has fried pickles for the first time. She’s right, they are awesome. Some dude rolls up on them with some shots and sits down. They ask if he fist pumps and he asks what’s in it for him. Creepy.

Ah, Ronnie flew down. Looks like Vinny and Angelina flew too.

Angelina said that by talking to Mike and Pauly, that meant she was invited. I’m assuming MTV also had a little something to do with it this time.

Looks like Sitch and Pauly got there first. I think they’re staying in a hotel or something.

Haha, Pauly and Mike aren’t super excited to see her there. Mike says he didn’t want her there, but then says she can stay with them. She’s the one who asks, not him or Pauly.

I hate how they recap what happened right before the commercial break.

Haha, Sammi shows up next and the guys are already making fun of her for having an irritating voice. She doesn’t even see that Angelina is there. Mike’s talking about maybe hooking up with Sammi now that she’s not worth Ronnie.

Sammi’s not cool with Angelina. Angelina goes over to Mike and says she tried to apologize to her, but she actually just asked if they were cool.

Sammi’s still hurt about whatever went down between her and Ronnie.

Vinny’s there next. My favorite. The way Vinny said “Who” when Pauly told him that Angelina was there was amazing.

Ronnie rolls in next. He and Vinny will be in the same room.

Haha, JWOWW and Snooki are the last ones there and they thought they’d be first.

Jesus, these trailer intros they have the crew doing are terrible. These people are not fun when they’re reading a script, people.

Haha, there was a super awkward exchange between Ronnie and Sammi. Hilarious. Sammi’s really holding a candle for him.

Man, JWOWW and Snooki get there LATE.

JWOWW’s not down with Angelina being there. Neither is Snooki. They both ignore her when they get in.

Snooki’s pissed because Angelina allegedly talked about her behind her back.

Angelina tries to be one of the guys but then she’ll try and get in the way of them hooking up. It’s jacked up. So far Angelina seems to be exactly the same as she was before.

This is a powder keg. Awesome.

It doesn’t take long for the dudes to get in the hot tub, but they’re alone.

Hahaha, JWOWW’s putting her clothes on the shelf in the hallway and it just collapses, but it also knocked over JWOWW’s drink and stained some of Sammi’s gear.

“I feel like a freaggin pilgrim from the 20s.” – Snooki

They’re cleaning her clothes in the sink.

Angelina jumps in the hot tub with the guys. She sits next to Ron and Sammi gets pissed. Jesus. They’re just sitting next to each other.

Haha, Snooki acts like she has no idea why Sammi would be feeling weird about being around Ronnie.

Gah, they keep doing this weird effect on the footage that makes it look red and/or grainy. It’s annoying as hell.

All the girls are in a cab and Sammi’s bummed out. JWOWW’s trying to find out what’s going on. Angelina comes out of nowhere and brings up them being weird about her leaving for a dude. Now it’s getting crazy. JWOWW’s asking to outside the car.

Haha, JWOWW’s practically jumping over the chair to fight her. Meanwhile, in the dude cab, everything’s chill.

Haha, Sammi just gets out of the cab and starts walking away. She’s not really getting in on the fight.

So they’re all at the club and everything’s awkward. Haha, Angelina says she’s too classy for he bullshit. Doubtful.

“What a surprise, Ronnie and Sammi are fighting with each other.” Ugh. As usual, when Ronnie gets drunk, he gets super creepy and sounds like he’s about five words away from violence. He’s doing really desperate big man talk that makes him sound like he’s about to cry.

They bounce, but Ronnie and Sammi are in the same cab. Ronnie’s drunk and giving Sammi shit.

“Ronnie’s obliviated at this point.” – Vinny. His word not mine.

Ronnie gets out of the cab and Vinny gets out with him. Jesus, Ronnie comes off as a douche. You can’t act hurt and then be all over the ladies bro.

So it’s all the dudes and Angelina out at the club, Ronnie’s creeping on the girls. He is a terrible dancer. Whoa, like Sitch said, Ronnie’s just getting on more and more grenades and land mines.

Angelina says that she’s got so much on Ronnie and she’d tell Sammi, but they’re not friends. She then calls Sammi a C-word. Stay classy Angelina.

Damn, Sammi’s hard up for Ronnie. She sounds like she’s never been in a relationship before. Meanwhile, he’s making out with some DOGS.