STARMAN OMNIBUS VOLUME 2 (DC)
Written by James Robinson, drawn by Tony Harris, Craig Hamilton, John Warkiss, Steve Yeowell, Matt Smith, JH Williams, Bret Blevins, Guy Davis, Wade von Grawbadger, Chris Sprouse and Gary Erksine
Collects Starman #17-29, Showcase ’95 #12, Showcase ’96 #4-5 & Starman Annual #1
For the secret history of how I got to read Starman for the first time, check out today’s Ad It Up which features an ad for the Starman Secret Files & Origins. After having my mind blown so many years ago by the adventures of hip new hero Jack Knight and his journey from 90s hipster to legitimate superhero, it’s actually been since then that I’ve read Starman because of the terrible way the comics were collected (yearly issues pulled out to make their own themed trades, etc.). I was really jazzed a few years ago when DC announced they were going to give this beloved series the same treatment as Jack Kirby comics and reprint everything (and I mean everything) chronologically.

I thought about saving my reread for the day I had all the Omnibi in my hands, but couldn’t resist. I tackled the first one a while back and didn’t write about it on the blog and then much later I finally got around to reading the second volume. The task is a bit daunting and a little scary because what if I don’t like it as much this time around as I did back then? I had the same fear when I reread Preacher, but I wound up liking it even more. Would that be the same case for Starman?

Mostly yes with a little bit of no. Yes because it’s still a book of amazing quality and no because it doesn’t feel quite as special because this style of storytelling has gone on to become the norm at least at DC (you can’t swing a dead cat without hitting a legacy character these days) though not always done this well. While reading through this volume it hit me why the book has resonated with me so much: it’s a book that deals with all these crazy elements like supervillains and demons and magical posters, but it doesn’t let that get in the way of the characters who, after a time, don’t consider these things to be all that crazy. I don’t mean for that to sound like they see these things as blasse necessarily, just that it’s a part of everyday life for these characters, which is something that many superhero comics seem to forget. There’s a difference between boredly talking about a supervillain threat and having a normal conversation with your dad about all the villains you’re trying to keep track of. 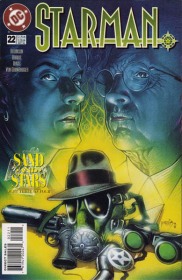 Also, the fact remains that Starman is not really a superhero story. It’s a story about a son (Jack Knight) trying to find a relationship with his father (Ted Knight, the original Starman) and see where that relationship goes once they start having some things in common. Yes, those things happen to be fighting villains and keeping Opal City safe, but Robinson never lets that detract from the emotions and story taking place. It’s also about rehabilitation, if not redemption, especially considering the evolution of The Shade and this volume’s introduction of Bob Benetti, a villain for hire who just got out of jail and is thinking about going back to a life of crime.

The volume is jam packed with goodness, including our heroes facing a demon whose domain resides inside a poster, the first meeting between Golden Age Doctor Fate and the Shade, a pirate-themed Talking With David, Jack Knight teaming up with Wesley Dodds (the original Sandman) in modern times, the Legends Of The Dead Earth annual which was actually pretty fun, Jack doing a solid for the original Mist, a Christmas issue, the trippy origins of the blue skinned Starman Mikaal and the introduction of a lot of time-displaced citizens to Opal. There’s a lot going on, but you get the feeling that Robinson had a game plan from the get go. The poster story is introduced fairly early on in the book, but not really focused on and solved until a while later. Yes there are arcs and more finite storylines, but it’s not like a comic today where it feels like every six issues something new happens because it’s supposed to. This flows like a rive and takes all kinds of twists and turns that are a delight to follow. There’s also lots and lots of references to upcoming storylines.

And it’s not like just Jack Knight gets the best moments. The last two issues  of this collection are some of my favorites and involved Mikaal in the 70s and Bobo Benetti dealing with a moral quandary that ends in a pretty great and unexpected way. This book contains one of the few occasions in which I didn’t want to erase the Royal Flush Gang from existence.

I can’t believe I’ve gone this far without talking about Tony Harris’ art. I mistakenly thought that he did all of the issues until he eventually left the book, but there are plenty of other artists jumping in here and there to do sequences, short stories, fill-ins or random other stories like the Showcase bits. Of course, seeing earlier Guy Davis and JH Williams III is a lot of fun. There are very few art missteps in this whole volume, which is impressive considering how much ground the book covers.

In addition to the reprinted comics which I love, the book also has a great deal of extras. There’s a forward by Harris (whose style has completely changed since the 90s) about his first meeting with Robinson while on a kind of press tour that’s really interesting and a nice look into the world of comic book collaboration. The back of the book has a series of journal entries by the Shade that I didn’t read through, a look at many of DC Direct’s Starman-related products (I want to get my hands on that Tim Bruckner statue) and then Robinson’s ongoing Time’s Past series of afterwards which include a story by story rundown of where he was coming from, what inspired him and/or what he was trying to accomplish with that story. I would anxiously flip to the back after finishing a story to get some inside scoop on the creative process and then jump back to read the next story. 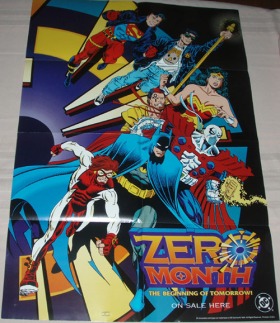 It’s almost a little sad reading this book for a few reasons. First off, Robinson doesn’t seem to have been able to get back up to this high level of writing since, though I do appreciate him using Mikaal in Justice League, but that book’s got a mountain of problems well before Robinson came along. It’s also kind of sad to think that this comic probably wouldn’t get made today. At least not by DC or Marvel, though it is kind of funny that even Starman rolled out of a big event (in this case Zero Hour). Maybe I’m being pessimistic, but a book that’s so densely packed and featuring a cast that includes a hipster, an old man, a gay blue alien, a few Golden Age villains-turned good guys and a family of Irish cops doesn’t sound like the kind of thing the Big Two would sign off on now. You might say “Well, it could be an Image book,” which is true, but what makes Starman so special is that Robinson was able to carve out this little world for himself inside the greater DCU. He pulled from what else was going on around him, using new and established elements and wove them all together into this great thing that’s hard to really describe. Sure, it would have been cool as a book set in it’s own universe, but we wouldn’t have the Shade or the Scalphunter ties or the occasional visits with other heroes and, at least to this longtime comic book fan, that makes the book all the better.