Tonight’s episode of Real World New Orleans was a rough one. It’s hard not to think of Jemmye as a sad, broken person especially as she gets super wasted again–this time on St. Patrick’s Day–then stumbles around the house breaking things and even trying to run away. You can understand why the roommates would be angry and annoyed with the situation and might even feel that same way while watching, but you also know you’re viewing someone with a lot of problems dealing with them in the wrong way. It’s not an easy episode to watch, but here goes. Hit the jump for the full live blog. 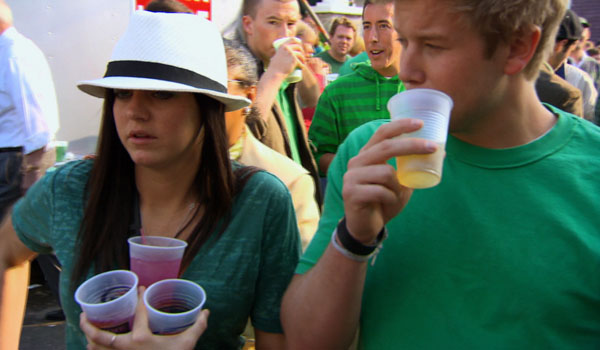 10:02pm – So, it’s St. Patrick’s day and Jemmye’s not feeling too good emotionally. She says she bottles up her abusive past.

“I just got a random boner and I hate it.” – Ryan while in the van with everyone. What is he 12? They’re hanging out at a St. Patty’s Day parade.

10:04pm – Ryan, Sahar and Ashlee head to the mission to help feed the homeless.

10:05pm – Knight and Jemmye are hanging out, but they lose McKenzie.

10:06pm – Jemmye asks Knight if he wants to have sex with other girls. He says she does, but even he said they need to talk about this when they’re sober.

Ryan’s so strange. He comes out and bothers the woman who runs the mission while she’s on a smoke break, telling her there’s a fire. She knows it’s bullshit, but goes inside anyway then slaps him when he points at the gas stove. Ugh.

10:07pm – Jemmye’s so drunk that she fell inside the cab, stumbled up the stairs to the house and then falls over after ansewring the phone. Then she tosses the phone and takes her shirt off in the main area.

10:08pm – Jemmye’s lying in the shower with the water running. I can’t tell if Knight put her there or she put herself there. It’s the little things I miss while writing these live blogs.

10:13pm – Ryan pulls one of the homeless dudes aside and asks him to talk. He’s just curious about the guy because he’s young (22). This seems very uncharacteristic, but they actually seem to have a good talk.

10:15pm – McKenzie’s still talking with this dude Grant. They seem to be having a good time. Meanwhile, Ashlee, Sahar and Ryan are still at the soup kitchen. 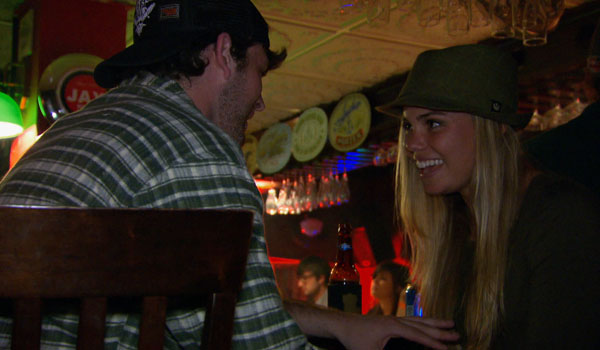 10:16pm – Ryan’s really ignorant about the Muslim religion, but Sahar seems cool answering his questions. How very un-Coral of her.

Knight’s still drunk and trying to help Jemmye who ripped the phone out of the wall and broke it. She’s saying she wants to go home. Ashlee, Sahar and Ryan come home. Ashlee doesn’t get why Jemmye acts so crazy when she’s drunk.

10:18pm – Jemmye’s saying she wants to go home but she’s afraid her old abusive boyfriend will kill her.

10:22pm – Ryan used to work for the phone company and is trying to fix the phone. He fails. Then he makes fart jokes. This kid is so strange.

10:23pm – Jemmye’s running around the house naked just wrapped in a blanket. Ryan freaks out because he sees her vagina and her vagina tattoo. I wonder what the tattoo is. Ryan hides in a closet with Knight who’s planning on leaving. And then he leaves. How does this kid not think people think he’s gay when he screeches in horror at the site of lady parts?

10:24pm – McKenzie’s still having fun with Grant. Preston and Eric must not have been considered a priority for the camera crews tonight.

Jemmye’s wasted and talking to herself in her room. She’s convinced herself that she’s going to the airport to go home. Oh, there she goes walking out the door. Eric shows up out of nowhere. Ryan’s letting her leave. Ashlee and Sahar go after her. Jemmye literally runs away, but they catch up with her on someone’s steps. Eric literally carries her back to the house.

10:26pm – Everyone who’s home is sitting and talking, Jemmye’s supposed to be in bed and then all of a sudden they hear her playing the piano. It’s like they’re living with the Phantom of the Opera.

10:30pm – Knight’s just skulking around outside. He doesn’t want to go inside and be around Jemmye. Sahar locks the gate so Jemmye can’t get back out. Knight goes inside. Jemmye seems less drunk, saying she doesn’t remember anything after day time.

10:31pm – Knight’s telling her she needs to deal with these things while she’s sober and not only think about them when she’s drunk. She’s saying it’s too hard and she freaked out tonight because she’s been away from her abusive ex for a year.

The problem that I see with Jemmye is that she’s too weak to deal with anything on her own, so she gloms on to anyone who seems nice and then won’t leave unless it’s super bad. She needs to learn how to be stronger, which is no small feat.

10:33pm – Haha, McKenzie comes back to the house with Grant so he can call a cab, but it’s busted. Knight says he broke it. Since he can’t leave, McKenzie and Grant proceed to make out in seemingly every room.

10:34pm – Ashlee’s getting fed up with Jemmye who’s shivering like a cartoon character.

Ryan asks Knight where he’s sleeping that night, he says he doesn’t know.

10:36pm – Preston comes back and Sahar tells him all the craziness that went on.

10:38pm – It’s the next day and it looks like everyone but Jemmye is awake. McKenzie asks if she was making out with Grant playfully or sexually. It was sexually. Jemmye gets up finally and looks like death warmed over.

10:39pm – McKenzie and Jemmye head out and talk. Jemmye says she gets drunk, her walls come down and she remembers things about her abusive relationship that send her to a dark place.

10:40pm – Jemmye’s going to the women’s shelter to talk to the counselor there, Dale. Good for her. Knight’s supportive of her.

10:45pm – The day of the appointment Jemmye’s having second thoughts about going to talk to Dale. It’s good that she has Knight because he went through a somewhat similar situation when it came to his prescription drug addition. He drives her to her meeting.

10:47pm – Jesus, Jemmye’s abusive ex was rough. This is hard to listen to. Dale points out that Jemmye doesn’t get mad, she’s very calm when talking about this kind of thing. I’ve heard this before in psych classes and other shows. The woman tells her she needs to get angry about what happened.

10:50pm – Jemmye’s really happy she went and talked with Dale.

10:55pm – Oh wow, Jemmye never told her mom about the abusive ex. She calls her up to tell her. Mom’s understandably upset because Jemmye didn’t tell her earlier, but handles the whole thing very well. She knows because she lived through it. McKenzie comes in and hugs Jemmye.

10:58pm – All the roommates are really supportive of her.

Whoa, the next episode is the drug episode. Wowzers.