Tonight’s episode of Jersey Shore was okay. It’s the first non-Angelina episode which should have been far more joyous and happy than it was. Sure, they had a pretty rad looking dinner, but then all the drama started eeping back in thanks to Sammi being awkward around JWOWW, Snooki being less than a one dimensional character and Mike turning into a creep. For the full live blog, hit the jump.

10:01pm – Everyone’s slowly waking up the day after Angelina left. Mike and Pauly are up first and want to get rid of her bed. She broke the slats on the bed.

10:02pm – How many guidos does it take to get a bed frame out of the room? The better question is how long will it take?

Haha, Mike and Pauly throw Angelina’s extra clothes and shoes out and over the wall of their backyard and hit a car setting off an alarm.

10:03pm – Mike’s gonna cook some lobsters tonight in celebration of Angelina’s departure. Snooki’s freaked out by the lobsters. JWOWW and Snooki think they can save one by putting it in fresh water and feeding it bugs and worms. They’re going to kill it much slower than it would in the pot.

10:04pm – Vinny and Pauly come out and take the lobster back to be cooked.

10:05pm – They’re even busting out champagne to celebrate the occasion. Mike pours a little out for her. Sammi’s all scared because Angelina was her only friend and now she doesn’t know what she’s gonna do.

JWOWW and Snooki are talking outside about Sammi. Snooki wants to squash it, but JWOWW says she doesn’t care.

The fact that Jenni STILL thinks she did Sammi a favor by writing the note makes me think she’s a little crazy in the skull.

10:06pm – Snooki goes and talks to Sammi on her own. They start talking in Snooki  and Jenni’s room, but Sammi doesn’t want to talk in front of JWOWW so they move out to the living room. JWOWW sits on the same couch as them and no one says anything. It’s like weird high school silence.

10:07pm – Meanwhile outside the dudes are having a good ol’ time in the hot tub.

10:12pm – Whoa, JWOWW just apologized to Sammi. Of course, Sammi doesn’t take it at face value. JWOWW says she thinks things would have been different had Angelina not been there. Sam’s being a total bitch who won’t stop playing with her eye lashes.

“I used to beat girls like that up in high school.” – JWOWW to the camera.

10:13pm – Snooki thinks it’s all good. Sammi tells Ronnie she’ll never be friends with JWOWW. I don’t think it bothers anyone except Snooki. Oh, and the producers because people not talking to each other doesn’t make for good TV.

10:14pm – Oh man, Vinny’s on the phone with Ramona, the girl that stood him up on that date. She wants to meet up in a half hour, head to the beach and hang out.

10:15pm – Oh no, Vinny’s waiting around for Ramona to show up AGAIN! Stop getting played homes!

10:16pm – Two other girls call the house for Vinny to go hang out with them at the beach. He gives Ramona five more minutes, then calls the two girls back to have them come to the house and meet them.

Right after he confirms plans with the two girls Ramona calls him to hang out. Vinny’s life is now a Three’s Company episode.

10:20pm – Vinny has to decide between girls and decides to go with Ramona. She’s got one of those shitty little dogs. Bad sign.

10:21pm – They’re hanging out on the beach, he’s asking her about Romania where she’s from. Vinny’s head over heels for this broad.

10:22pm – Aww, Vinny’s taking care of the dog. Seems like they had a good time. We’ll see if she actually shows up for another date. He did get a goodbye kiss. Nice work Vinny, but watch out for this one, she’s tricky.

10:23pm – Snooki’s friend-from-home Ryder will be coming. The night before she’s all drunk and calling Snooki. JWOWW tries to figure out her travel plans. Then Ryder tries to tell Snooki she’s not drinking.

10:24pm – Everyone thinks Ryder’s going to miss the flight. Oh no, Snooki, you  might have to wait another 2 weeks if your idiot friend doesn’t make it down.

10:28pm – The next morning Snooki calls Ryder and doesn’t hear anything. Great, I was hoping to see Snooki pout like a petulant child some more this episode. She is absolutely a cartoon characters.

10:29pm – Hey look Ryder shows up. She seems annoying, though not as bad as Snooki. I want to drink whatever Margarita/Corona thing they’re drinking though.

10:30pm – Cabs are here! Time for another drinking/dancing montage. I wonder how much of the series consists of just scenes like these.

Snooki is dancing up on a couch with no dudes on it.

10:31pm – Apparently there’s a lot of grenades there. Mike’s being a little too aggressive with the ladies. The chicks don’t want to know what the Situation is. Some are straight up telling him to get back away from them.

Sammi tells Ronnie in the club that she can’t imagine what she’d do if Mike came up to you. Ronnie says he did come up to you and you made out with him.

10:32pm – Mike’s trying to round everyone up at the end of the night, but Snooki doesn’t want to go. Mike just picks her up which Snooki doesn’t like at all. Meanwhile, Ronnie and Sammi are just sitting there.

10:33pm – Mike says he was just trying to help out. I think he sees himself as the protector, but he goes overboard with it.

10:36pm – MTV keeps covering up the subtitles in the bar with some text that’s TELLING ME WHAT I’M ALREADY WATCHING!

10:37pm – Paully and Mike take off. Snooki’s still there, but is pissed at Mike and now wants to get home.

Snooki gets back to the house and expected an apology from Mike which didn’t happen. Snooki says that Mike is ruining everything.

10:38pm – The next day Vinny and Ronnie head to work. It’s all silent between Mike and Snooki. Mike and Pauly go to GTL.

10:39pm – Snooki, JWOWW and Ryder are going to go get lunch. Right before they leave, Snooki asks Sammi if she wants to come and Sammi makes it all weird and awkward because she doesn’t want to hang out with Jenni.

Sammi’s a douche who needs to get over herself. She decides to stay and wait around for Ronnie.

10:40pm – Vinny does cartwheels after getting off work.

Once Ronnie and Vinny get back she asks Ronnie if she should have gone. She KEEPS ASKING ABOUT IT. At least she appreciates the offer from Snooki.

10:41pm – Snooki and Ryder seem to communicate like Star Wars aliens. Now they’re trying to find some mixers to make drinks. I’ve made some weird drinks, but this sounds terrible. 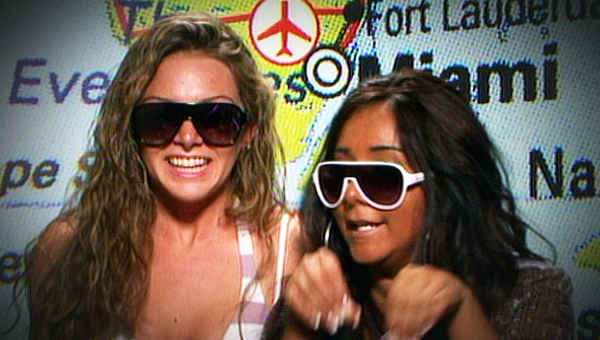 10:42pm – Even though she says it tastes like ass, they still drink it. Or maybe not, they went to get liquor.

10:43pm – Mike and Pauly run into them on the way back from the liquor store and Mike apologizes. She says she doesn’t need just an apology, but a conversation. Ugh.

10:47pm – So Ryder and Snooki make their drinks and start drawing the roommates on the blackboard behind the phone. The drinks are still gross, though apparently.

10:48pm – Snooki says that the previous night was the worst night of her life. Seriously? Snooki tells Ryder to touch JWOWW’s boobs, then she does it too.

If Snooki doesn’t want to be hassled by Mike, why doesn’t she go to a different club?

10:49pm – So they’re all out at a club and Ramona shows up. Mike thinks she’s the hottest girl he’s seen in Miami. Vinny goes somewhere and Mike swoops in and tries to get up on her. Pauly says he’d never pull a robbery on his dude. Ramona shoots him down.

10:50pm – Ramona tells Vinny what happened. It is weird how Mike goes after Vinny’s girls. Mike is staring at Vinny and Ramona dancing like a total lecherous creep.

10:51pm – Everyone’s dancing and having a good time but Mike decides it’s time to bounce. Whoa, he walks over to Snooki and starts kissing her. It also looks like he’s trying to put his hand up her dress. He’s telling her it’s time to go and then smacks her in the mouth. Whoa. Not okay.

10:52pm – Once again Mike tells the camera he’s the leader and what he says goes. Then he gets in Snooki’s face again. That’s messed up.

10:56pm – Now Mike’s trying to tell JWOWW that everyone’s leaving and she doesn’t seem to care. JWOWW’s pissed at him too.

10:57pm – Even Pauly says that Mike’s being sour. Everyone’s saying he’s been real touchy lately and lacking patience. I bet it’s cause he hasn’t hooked up recently.

10:58pm – Mike looks like a dad chaperoning a dance where everyone’s having so much fun and he just looks like a bored asshole. Total Uncle Creepy moment.