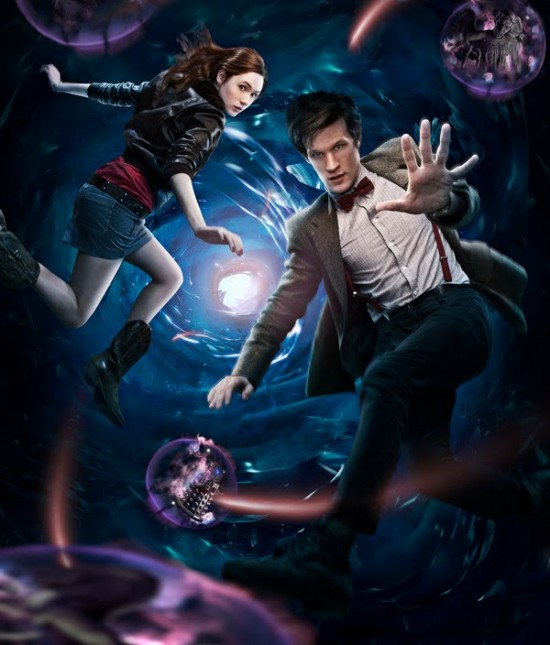 I was relieved to hear generally good things about Matt Smith, the new Doctor on Doctor Who and his new companion Amy Pond. I was even more relieved to watch the new season myself and find myself really liking them both. While the initial pictures of them made the pair look super-young, they actually both seemed pretty mature once things got going. I think he even won the missus over even though she was a dyed in the wool David Tennant lover (Tennant is still her favorite, but I don’t think she hates Smith). While I did have a few problems with individual episodes, I’ve got to say that, as a whole, I really dug how this season was crafted from the crack storyline to how many of the previous guests got called back to in the two-part finale.

Two of the things that bug me about Doctor Who are that, even though humans are supposed to be this great race, they’re constantly being duped by a higher power and that they keep going back to the well when it comes to villains, specifically the biggies like the Daleks, Cybermen and The Master. Both of those things happened in the fifth season, but they happened pretty early on in the season and then moved on to other well worn territory that doesn’t bother me like integrating historical figures and introducing new travelers on the Doctor’s level.

The second episode “The Beast Below” had humanity being subjugated by fortune teller robots while riding a giant tortured whale through space (hitting the first nerve) while “Victory of the Daleks” brought back the Daleks for no apparent reason. Since they don’t really play much of a role in the season, it would have been nice if the writers had held off on bringing them back in a later season (yeah, I know they’re in the finale, but they didn’t NEED to be there).

Aside from those early stumble though, I was digging the season. The return of the angels in the two-parter not only brought River Song back into the picture but also put a fun, sci-fi spin on their mythology. I wasn’t as huge a fan of the original episode they appeared in (must be all the horror movies I’ve watched), but it was pretty good so this was a good call back. I know that seems counter-intuitive considering my stance on bringing old villains back, but this one made a lot of sense and served to get River and the Doctor together. From there we had a pretty good mix of the usual Doctor Who-niverse from Venice to the far future.

And, can we talk about the finale? Damn! I loved it. The idea of basing a trap on Amy’s memories, making a robot version of her time-displaced fiance Rory (by the way, I loved how they treated him this season, especially when he started sounding and acting a lot like previous companion boyfriends) and making the Pandorica actually a SPOILER trap for the Doctor was ingenious. Even with visits from all the aliens from the Who-niverse it felt fresh and made a lot of sense. My one question though is: Who was making the TARDIS freak out and explode? Did I miss the explanation for that in the episode? Anyway, the way Amy brought the Doctor back actually gave me chills, which is something I don’t know if I’ve felt in a while. I’m excited to eventually see the now-shooting Christmas special.

The missus and I actually watched this season on disc from Netflix which might not have been as immediate as we usually like, but having access to only two-to-three episodes to watch at a time was actually a perfect way to watch since it gave us time to absorb everything. I’ve noticed that when we watch things in huge chunks per day on Netflix Instant that they kind of blend together. Even though we still watched a couple episodes at a time which worked out much better.

Oh, also, what’s the deal with how these episodes look? I know they film in digital and convert to make it look like film, but I noticed a lot of ghosting and jerking that was really annoying. It’s like the images were moving faster than they should have. I first noticed it in the WWII episode and thought it was intended to look like an older movie or something, but it lasted the rest of the season and was always distracting. Does anyone else know what I’m talking about and whether this happened on the actual broadcast episodes or is it just a trick of the DVDs?