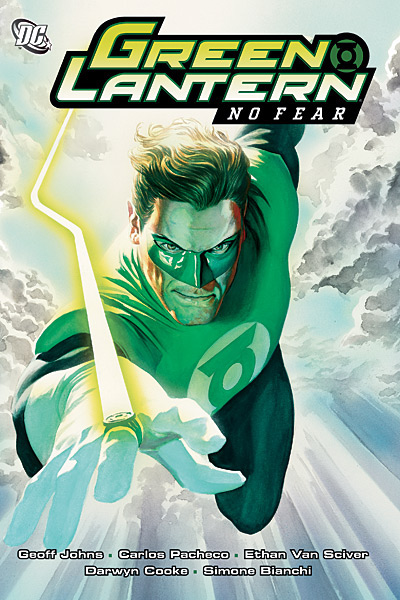 GREEN LANTERN: NO FEAR
Written by Geoff Johns, drawn by Darwyn Cook, Carlos Pacheco, Ethan Van Sciver and Simone Bianchi
Collects Green Lantern #1-6, Green Lantern Secret Files and Origins 2005
As I mentioned in the first Books of Oa post about Green Lantern: Rebirth, I’m looking to get a better grasp of Hal Jordan as a character and see how the overarching, multi-color Lanterns started out. While I wasn’t doing much blogging over the Thanksgiving holiday, I was stealing away time here and there to read through a lot of the earlier GL and GLC trades and also spent an inordinate amount of time trying to piece together not only a real time release chronology of post-Rebirth Green Lantern comics, but also an in continuity one as well. That’s a roundabout way of saying that the actual rebirth of the Green Lantern Corps is surprisingly non existent in the actual comics. See, Rebirth finished off with a cover date of May 2005 with the Green Lantern comic starring Jordan kicked off in July 2005. Hal’s still got his ring and kicking around Earth and fighting some familiar villains and even visits Oa at one point, but we never actually see the Guardians talking to the five GLs from Rebirth (Hal, John Stewart, Kilowog, Guy Gardner and Kyle Rayner) and telling them what’s up. I wasn’t expecting a full issue or miniseries focusing on these kinds of things, but I was surprised going back and discovering that not even a scene of such things exists and it doesn’t in Green Lantern Corps: Recharge or any of the other books I’ve read so far.

Anyway, the point of this review isn’t to talk about what wasn’t in the book, but was. Aside from some somewhat schmaltzy short stories taken from what I assume was the Secret Files issue in which we see Hal flying Kyle and a brief history lesson, we’re along for the ride as Hal gets back to his life. He’s living in Coast City which is being rebuilt, but having trouble getting new people to move in. He’s trying to get a job back in the Air Force flying planes. And, most importantly to the action of the series, he’s fighting villains like Manhunters old and new, Hector Hammond (as much as you can fight that giant-headed weirdo), The Shark and Black Hand. We get a hint after the Manhunter story that a group of GLs we thought were dead from Hal’s rampage seem to be held by the Manhunters and their mysterious hooded leader which is a major point of the next arc. There’s also some yellow alien Gremlins running around who, we’re told, evolved Shark and Hammond. There’s an interesting note in the issue where Hammond says that the aliens were planning on harvesting both villains for parts to sell as weapons in an upcoming intergalactic war. I don’t remember either character or the Gremlins being mentioned during Infinite Crisis or Sinestro Corps War, so it could be a detail that Johns hasn’t gotten around to getting back to.

On the other (heh) hand, Hal’s dealings with the higher powered Black Hand (the Gremlins did something to him too, but I’m not sure what) definitely refer to Blackest Night. The rejuvenated villain seems to have an even deeper connection to death and even says “You think you’re strong. But death is stronger. It is the pure power of the far end of the emotional spectrum. The emptiness of space. The blackest night.” At the time the scene just seemed like the ramblings of a madman, but reading it now, it’s easy to see that Johns was planting seeds not just for Sinestro Corps War, but also Blackest Night in the earliest moments of the series.

When these issues first came out, I wasn’t all that interested in them. I wasn’t a big Hal Jordan fan and the inclusion of weird old villains like Shark and Hector Hammond that I didn’t care about, didn’t help matters much. This time around, I’m still not super interested in those villains, but I do like seeing the foundation for the books I’m still enjoying to this day. I was also interested to see the establishment of Hal as a character. He’s confident, like I’ve said previously, but he’s also a good man with a good heart who’s trying to do the right thing, it’s just that his ego gets in his way sometimes. I’m not up on my Hal Jordan history, but there’s an event in Hal’s life that I thought was really interesting. See, after his dad died in a plane explosion, his mom didn’t want any of them to join the Air Force, but Hal did anyway. She wouldn’t talk to him after that, so when she was on her death bed and she refused to see Hal because he was in the Air Force, Hal had to find a way out of the AF without quitting so he could go see her. He couldn’t bring himself to quit so he slugged his commanding officer and got thrown out. His ego got in the way of something that could have been easily explained away. The worst part of the whole ordeal is that he went to see his dying mother, free of the Air Force and she wouldn’t see him. It’s an interesting relationship with his past that Hal has and it’s interesting to see it revealed here and there.

Last, but not least, it’s time to talk about the artwork. I’m not Cook’s biggest fan when he’s writing, but his art has an interesting Silver Age quality to it that’s still dynamic, plus it’s interesting to see that style on a newer character like Kyle Rayner as seen in the opening story from the Secret Files issue. Van Sciver jumper around here and there with a retelling of Hal’s origin early on and an issue or two where he gets to really flex his artistic muscles by covering Kilowog, a slew of rookie GLs, a hulking Shark, the gross Hammond and the creepiest Black Hand ever seen up until then. Pacheco has art chores on the story that brings the Manhunters back into the fold. His art is solid and I like it, but it doesn’t blow me away. The most interesting artist in this book, as far as I’m concerned is Bianchi. I completely forgot that he worked on the series here and there in the early days. I’m a big fan of his work with Grant Morrison in Seven Soldiers: Shining Knight, so seeing more of his work with characters I know and love is a lot of fun. He also gets to play with the same villains that Van Sciver does and it’s really interesting to see such different takes on the characters all within the same book. I can see how the jumping on and off of artists might have bothered some folks, but it doesn’t bother me at all.

Next up for Books Of Oa, I’ve got Rann-Thanagar War which featured Kyle Rayner’s first post-Rebirth action (as far as I can remember), then Green Lantern Corps: Recharge and the second volume of the regular GL series. I’m having a great time re-reading these books and hope to either get my hands on a copy of the Infinite Crisis trade or dig out my issues so I can remember how the GLs played into that story, but if not, I’ll come back to it later on.

2 thoughts on “Books Of Oa: Green Lantern No Fear”