GREEN LANTERN CORPS RECHARGE (DC)
Written by Geoff Johns & Dave Gibbons, drawn by Patrick Gleason
Collects Green Lantern Corps Recharge #1-5
After Geoff Johns brought Hal Jordan back in Green Lantern: Rebirth and he got his own book again, the first few issues of which are collected in Green Lantern: No Fear, we got to see how the Green Lantern Corps got pieced back together in a little miniseries called Green Lantern Corps Recharge.While Hal became the star of the regular GL comic, pretty much everyone else appeared in Recharge and then, after that, the Green Lantern Corps ongoing series which makes it the home of existing Lanterns like Kyle Rayner, Guy Gardner, Salaak, Mogo, Stel, Brik and Kilowog along with newbies like Soranik Natu, Vath Sarn, Green Man and Isamot Kol. When the book first came out I liked it because it had Corps members, but didn’t like it because I wanted to see the adventures of more familiar Green Lanterns. I didn’t care as much about these rookies, but this time around, I really enjoyed seeing where these now-important characters came from .

Like Rann-Thanagar War, which featured Kyle and Kilowog in supporting roles, Recharge has a lot of different characters fighting a lot of different battles in different locals, but Gibbons and Johns do another great job of keeping everything fast paced and interesting. 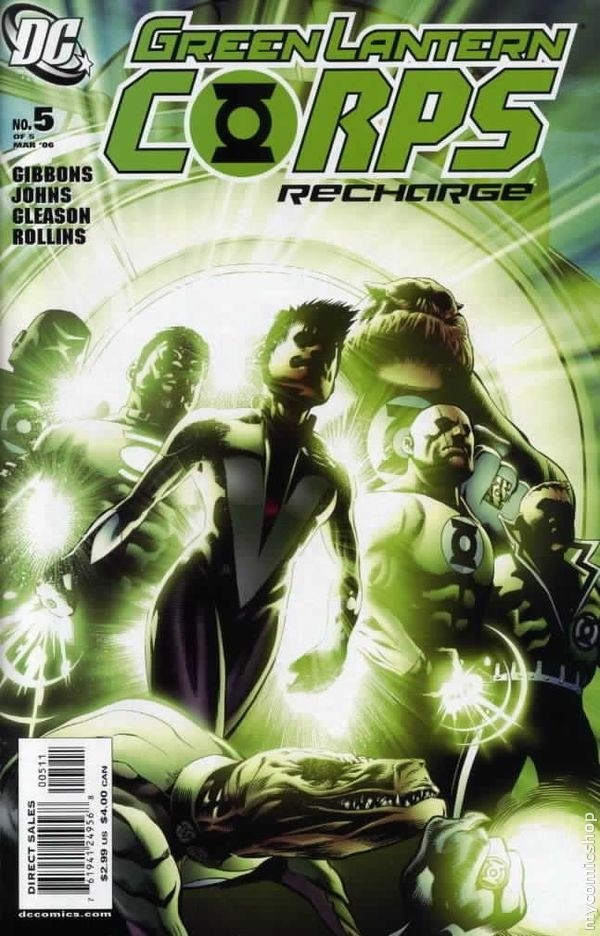 A lot of the groundwork for the Corps, it’s rules and who does what was established in this book. Instead of one GL per space sector, of which there are 3600, the Lanterns will be working with partners. Lanterns who were still alive when the Corps was previously destroyed were all sent rings, so of whom returned, while other rings went out to people able to overcome great fear. Kilowog is tasked with training the rookies who really do have to overcome fear in order to make their rings work on yellow. They also have to pass in order to get their actual Green Lantern symbol, which is essentially their badge. Guy is also assigned to train the troops which he’s none too pleased about, saying to Kyle that he’s not a teacher, but, for the record, he was at least a substitute teacher as seen in the pages of Detention Comics #1. Anyway, before long, various Lanterns head off on various missions, all of which wind up being connected thanks to a web of portals set up by the Spider Guild. There’s also a group of bounty hunters consisting of Kyle and John Stewart villain Fatality, Bolphunga from Alan Moore’s “Mogo Doesn’t Socialize” and then Dal, Quade and Burll, characters I don’t remember.

The series also reminds readers how important Mogo is to the GLC. He not only produces the rings, but he also provides Lanterns with a kind of therapy. This time around, Kyle gets treated by having visions of his girlfriend Alex, the woman who was infamously murdered and stuffed into a refrigerator by Major Force in Kyle’s early days of being the universe’s only GL. This is a plot element that gets picked up in later series’ including Kyle’s own Ion maxi which picks up after Infinite Crisis’s One Year Later jump.

Overall, Recharge works really well as a way to reintroduce readers to the very concept of the Corps while showing exactly how cool Green Lanterns can be, how tough you have to be to actually become one and what you have to go through to stay one. Only the best and brightest make it through and that’s something that Johns and Gibbons convey without smashing you over the head with it. And man oh man, Patrick Gleason is one of the perfect artists for a book like this one. A big part of the reason the book works so well is that he draws everything so epically, but also handles the smaller more personal moments so well. His figures look like actors which is something that not every artist nails. All in all, this is my favorite GL book so far!