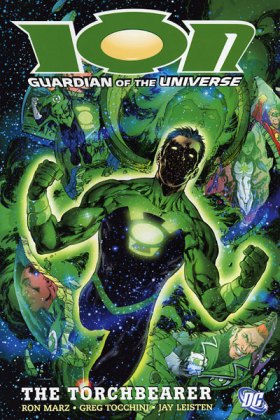 ION THE TORCHBEARER (DC)
Written by Ron Marz, drawn by Greg Tocchini & Tom Grindberg
Collects Ion #1-6
After Rann-Thanagar War, Green Lantern Corps Recharge and Infinite Crisis, Kyle Rayner became even more powerful thanks to regaining some of the power he bestowed to the now-dead Jade (who gave it back when she died in space). Going by Ion once again, Kyle was left to decide what to do with himself and figure out his place in the universe. Launching a month after the line-wide One Year Later jump instituted in IC, the book opens with what looks like Kyle attacking some fellow Green Lanterns and then hanging out at an artists’ retreat on Earth. I remember being really confused by this story at first because, as was clearly intended, you’re not supposed to know whether Kyle’s really losing it Hal-style or if it’s someone else masquerading as him. For whatever reason, I didn’t even think of the latter and the former didn’t make a lot of sense, so I was definitely in the dark. Well after Kyle spends some more time with Mogo in a therapy session where he talks to many of his dead girlfriends (similar to what we saw in Recharge) he teams up with Hal to stop his mad doppelganger who turns out to be none other than insane foe Nero, a man who was messed with by the Weaponers of Qward and given a ring much like Sinestro’s during Judd Winick’s run on the book.

Like many of the other OYL books, we’re not really given a lot of information about what Kyle did during the missing year, but we do find some interesting bits out here and there. First off, the Guardians won’t allow anyone to help the seemingly mad Kyle, nor will they explain what’s happening to him which of course raises some eyebrows. As it turns out, Kyle now has direct access to the GL power battery as well as the Starheart which was the Guardians’ collection of magic and also fuels Alan Scott’s powers, so now he’s doubly powerful. The Guardians seem to think that Hal and Kyle are very similar in that they will both be the savior and bane of them, which is an interesting assessment. Kyle is also told that with the Ion power he can literally restart the GLC again on his own if it gets decimated like it did in the past.

Overall, I think this is a pretty important installment in the overall GLC mythos. It’s good to see Ron Marz writing the character he invented and brought to prominence while also throwing in some of Kyle’s villains that long-time fans remember like Nero. There’s even more in the next volume. We also get a solid idea of what Kyle’s role is to some extent when the Guardians tell him that he will be their agent. It’s also nice to see Hal and Kyle getting along so well and Kyle’s optimistic viewpoint is a refreshing one in comics. Much like me as a reader, he just wants to see what will be happening next. My only real beef with these issues is that the art isn’t so great. I’m not really familiar with Tocchini, but his art seems really inconsistent with some really great looking pages mixed in with some really sloppy looking ones. If you can get past that though, I’d recommend giving his book a read. 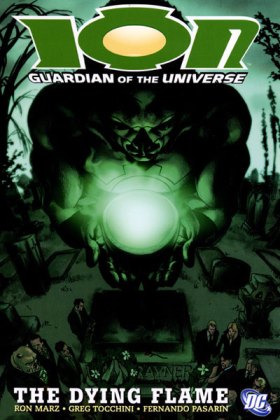 ION THE DYING FLAME (DC)
Written by Ron Marz, drawn by Greg Tocchini, Paco Diaz, Yvel Guichet & Fernando Pasarin
Collects Ion #7-12
I can’t, however, recommend the second volume of Ion, though, unless you’re a huge fan of Kyle Rayner like I am. And even then, this volume reeks of editorial interference, plans being changed mid-run and elements getting shoehorned in. Things start off interesting enough with the return of another Kyle villain, this time Effigy who was changed by the Controllers, but, much like Nero, has no idea why he’s attacking Kyle. There’s a mystery as to who has been messing with Kyle’ rogues but we don’t get an answer in this collection as to who’s doing what The early issues also bring Kyle’s old landlord and confidant Radu into the story which is nice to see. From there, Kyle heads to an alien world to help out in the wake of Nero’s destruction. The idea that Kyle needs to help fix things that someone else did dressed as him seems a little weird to me, but I guess it works. This story doesn’t really do much of anything and could have been tossed out. From there we find out Kyle’s mom is dying and no one knows what’s wrong with her. The Guardians call him away, but instead of immediately heeding their call he winds up running into The Atom and Flash from the Tangent universe. If you’re not familiar with Tangent, it was a series of one-shots DC published in an alternate universe in which the Cuban Missile Crisis actually happened with heroes and villains based in name only on existing DC characters. For some reason, DC decided it would be a good idea to bring them back into the consciousness at this time. As they don’t actually serve any purpose aside from sending Kyle into the Bleed where he meets Captain Atom dressed as Monarch none of which has any bearing on this series and only hints at Countdown which was a continuity mess that wound up ruining aspects of Sinestro Corps War and comics in general.

After all that useless nonsense, Kyle winds up teaming up with no longer dead girlfriend Donna Troy against yet another Kyle villain, this time Grayven, Darkseid’s bastard son. It’s a fun fight, but gets cut short when Kyle has to return to his dying mom who’s being looked at my the GLC’s resident doctor Soranik Natu. Unfortunately, there’s nothing that can be done and Kyle’s mom passes away. There’s a really creepy moment where Kyle uses the Ion power to actually bring her back to life, but soon realizes the error of his ways and undoes that. That whole scene is handled really well, though it smacks a little of that Buffy episode where they wisher their mom back from the dead.

I’d say that if you find yourself in possession of this book, just ignore everything with a Monitor, Tangent character or anything that has to do with Countdown and mostly stick to the first and last two issues and then anything with other GLs or the Guardians. Everything else feels like filler. I probably should have read the second volume in more of a chronological order with the rest of the GL books I’m reading, but after really enjoying the first one, I wanted to find answers in the second. Unfortunately there just aren’t any. A few of the questions are answered in the Sinestro Corps War story, but as a story in and of itself, Ion winds up not really working, which is too bad. I’d like to see Marz get another chance to write Kyle and this time just let him run with the character and do his thing.