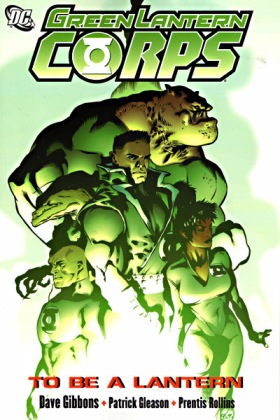 GREEN LANTERN CORPS: TO BE A LANTERN (DC)
Written by Dave Gibbons, drawn by Patrick Gleason & Dave Gibbons
Collects Green Lantern Corps #1-6 (Aug. 2006-Jan. 2007 cover dates)
After all the craziness of Rebirth, Recharge and Infinite Crisis, the Green Lantern Corps got their own ongoing series for the first time ever (well, the second volume of GL got renamed GLC at some point, but does that really count?). This volume kicks off after DC’s One Year Later jump and we’re shown some of the changes that took place between Recharge and now, but unlike a lot of other OYL books, the year gap wasn’t much of a mystery. Basically, Guy Gardner staid on planet because his shore leave got suspended for a year at the end of Recharge, they helped rebuild Oa, train rookies and protect the galaxy. Pretty standard stuff. Oh, and they also built a huge Lantern-shaped shell around all of Oa and made it even harder for the Guardians to be seen by anyone other than Salaak. From a chronological perspective, it seems as though the stories in this volume take place before the ones in Revenge Of The Green Lanterns because we don’t see any of the Lost Lanterns on Oa at this time.

Gibbons handles this book like your basic cop show, which makes so much sense it’s a wonder that no one else thought of it before. The main storylines in this volume include Guy wanting his shore leave, Soranik Natu dealing first with fear and later with being hated on her home planet and some troubles between Vath and Isamot, especially when Isamot starts failing to show up on missions. These stories aren’t drawn out over six issues like a lot of books, but each come to their own resolution at varying times. There’s also a murder mystery going on with Soranik’s partner Myrrt which winds up being a familiar story if you watch procedural with any regularity, but I totally didn’t see it coming the first time around which goes to show how well Gibbons handles these characters and the larger concept of the Green Lantern Corps.

We also see Guy’s shore leave on a funky little planet, but it doesn’t go so well because Bolphunga shows up once again to give him trouble. Being awesome, Guy doesn’t have too much trouble with him, though Salaak does wind up saving the day. It’s nice to see that multi-armed weirdo actually doing something aside from being snide and citing rules.

From a larger story perspective, the books has some interesting moments. Of course, we see the new Oa which doesn’t wind up lasting too long if memory serves. We also see the city on Thanagar that Kyle and Kilowog helped create in Rann-Thanagar War, which was a nice pick-up. Literally the biggest thing introduced from this perspective, though, is the living city of Ranx which will come into play during Sinestro Corps War. We’re also reintroduced to the Children of the White Lobe. This little baby-looking bastards are pure evil, sport psychic powers of some kind and love to explode. They were first mentioned in Alan Moore’s short story “Tygers” from Tales Of The Green Lantern Corps Annual #2 (1986) which also introduced the idea of Ysmault, Sodam Yat. Geoff Johns and company were clearly fans of this story and used many of the elements to build towards Sinestro Corps War and Blackest Night (check it out in my all time favorite trade DC Universe: The Stories Of Alan Moore). Oh, we also saw a bunch of yellow bugs on Mogo, but I can’t remember if those have anything to do with Sinestro or they’re just fireflies.

Something I noticed while reading GLC is that it really felt like Gibbons was more focused on building new stories, adventures and villains for the Corps to face while Johns’ Green Lantern was more concerned with digging up old bones and making them work. I think that might have been why some non-Hal fans liked GLC more than GL, because it wasn’t all retreads, but a lot of brand new elements. Sure, there’s some references, but they seem more subtle (well, aside from Bolphunga, another Alan Moore creation). I’m having a great time re-reading these books and am honestly very excited to read Sinestro Corps War in a few sittings, which is something I don’t believe I’ve ever had the pleasure of doing before.