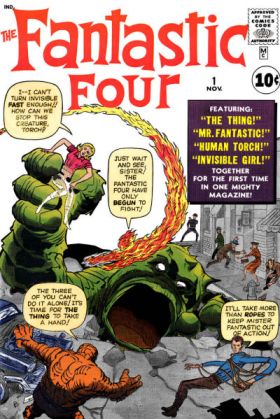 FANTASTIC FOUR VOLUME I #1 (1966)
Written by Stan Lee, drawn by Jack Kirby
I recently got a great deal on one of those GIT Marvel DVDs that features decades’ worth of comics on one disc. I added the Fantastic Four AND Silver Surfer one to the Iron Man and Avengers discs in my collection already. Now, to be clear, the disc has every issue of Fantastic Four and Silver from 1961 to 2005, I didn’t buy two separate discs. Anyway, unlike Iron Man and The Avengers’ early days, I’ve heard great things about the readability of Fantastic Four from the beginning and decided it was as good a place as any to start. So, with that in mind, I’m going to attempt to read an FF issue every day for the foreseeable future. I’m sure I’ll hit snags here and there and the schedule will probably get royally screwed up when the baby comes, but I’ve got good intentions.

Before getting into my review of the first issue, I figure it’s a good idea to explain my history with the Fantastic Four. Even though the very first stack of comics I was ever given–by a neighbor who was a few years older than me and had no need for them anymore–did in fact include FF #355 (an incredibly confusing issue for someone who only knew the very very basics at the time), I was a DC kid growing up. The first time I read the actual comic on a regular basis was during Heroes Reborn. I tried sticking around with Heroes Return, but couldn’t get into it. I would stay away for a while until after Mark Waid’s run had ended and I read the whole thing at once. It’s an amazing story. And finally, I was getting into Jonathan Hickman’s when I stopped reading monthlies. I have no experience with the original, epic Lee/Kirby run or even Byrne’s well regarded 80s stuff, but I will soon enough. I was a fan of the 90s cartoon, bought a bootleg of the Roger Corman movie as well as the two actual releases. Plus, I’m a long-time comics fan so I have a pretty good idea of what the team has gone through. Or at least I think I do.

Okay, seems like a good enough time to jump right in. My first worry about reading these comics can be summed up in two words: Stan Lee. Every other comic of his from this era I’ve tried to read has been bogged down with a verbosity the sinks the dialog and thought boxes, no matter how important they might be. Well, with this issue, Lee seemed to reel himself in a bit (or maybe he wasn’t quite so in love with his own words yet). Sure the boxes explain more than you probably need to read, but you’ve always got to remember that these books were written for kids, not adults and not nerds. What surprised me about the book was it’s structure, which didn’t start with the famous origin, but instead kicked off with a flame signal in the sky requesting the FF’s presence. We’re then shown Sue, Ben and Johnny individually living their lives and running to the call. We’re not sure how long they’ve been together or how long it’s been since their trip into space, but they apparently work well enough together to be like a well oiled fighting machine.

In addition to revealing the FF and their relationships–Johnny and Sue are siblings, Sues with Reed, Ben has a thing for Sue and seems to be really antagonistic towards Reed, only agreeing to fly the ship after Sue makes fun of him–we also get to see a giant monster attack, The Mole Man’s origin (pretty goofy, people made fun of him for looking funny so he decided to go to a fabled city at the center of the earth) and the FF facing some other giant monsters.

A few other quick notes. This isn’t the Kirby you’ve come to know and love (or at least not the one I do). You can see the beginnings of his style with the big hands and square-ish features, but, the be bluntly honest, the Thing looks like a pile of mud most times. The monsters look okay, but a little weak. My favorite aspect of his art in this issue is how he handles the Human Torch who he draws like a person fully engulfed in fire with no facial features or much else visible. Such a cool visual and probably as scary if not scarier than the Thing’s visage. Also of note, the story is not set in New York City, but Central City. I’m sure I read that somewhere and it changes shortly, but it’s something I had forgotten. One last quick note for people who might be considering buying these discs, the comics therein are not reworked in any way, they are literally photographs taken of a comic book open on a table. Sure it would  be nice to see these issues redone and looking as nice as possible, but I like seeing the page bends, wear and tear and especially the ads and letter columns.

All in all, I’m excited to read the following issues and to experience historical comics personally, especially as Kirby really comes into his own. I’m far more encouraged after reading this first issue than I was after reading Avengers #1 or the early Iron Man appearances. Anyway, here’s a few of my favorite panels from the issue, this will also give you an idea of the quality of the images.