As much as I’ve been digging 007 lately, dedicating so much time to that franchise–whose movies tend to all hover around the two hour mark–has kept me away from watching other kinds of movies, specifically horror flicks. I still have to finish Die Another Day (almost finished last Friday before running off to New Hampshire) and the Casino Royale and Quantum Of Solace, but the missus wants to watch those as well, so it might take a while for me to get to them. Anyway, I had a great time today going through Netflix Instant and checking out three movies (I also watched Dollman, which doesn’t have enough horror elements for me to include it here, but I might do a Quick Movie Review of it). Anyway, I must have been going through the “weird movies that begin with D” on Netflix a while back because Dolls was the next movie on the ol’ queue and I went for it, especially after realizing that Stuart Gordon directed it. I’ve seen embarrassingly few of his movies only seeing Re-Animator once a long time ago as well as Robot Jox which was a lot of fun and the strange/bad Space Truckers. I even had the pleasure of interviewing Gordon once, but I’m sure I’ll post something separate about that sooner or later.

Anyway, Dolls is about a young girl in England with her asshole father and stepmom whose car breaks down so they have to spend the night in a nearby mansion owned by an old couple with a penchant for doll-making. A nice guy played by Stephen Lee (he’s fantastic in this movie) also shows up at the house with a pair of British punk rawk chicks in order to up the body count and give the little girl someone to confide in. As the night–the longest one of the year, or something–the dolls start coming to life and taking out various guests with only the little girl knowing what’s up. Of course, her folks don’t listen to her because she apparently has visions or daydreams or something and is constantly talking about monsters and fairies and whatnot. The only one of these we see is early on when she envisions her thrown-away teddy bear becoming a giant, turning into a real bear and killing her parents. This scene convinced me this movie was worth watching. See here:

I don’t usually like killer toy/doll movies because I’m always thinking “Just crush it.” This movie handles that well by throwing tons of dolls at our house guests. The sheer numbers, not to mention their weapons like tiny knives, overwhelm one person, while another uses a makeshift weapon to wreck shop on a bunch of them, so it’s not like everyone is being taken out wholesale by these tiny things. THEN, things get flipped even more SPOILER when it turns out that the dolls aren’t normal dolls. They have little creatures inside that turn out to be previous guests who proved to be immoral and were thus turned into mini monsters by the couple who own the house who are also witches. It’s a great turn that makes them more dangerous and threatening. A good work around to a pretty great movie, possibly my favorite killer toy movie of them all! 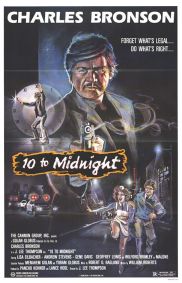 It’s kind of funny how similar Dolls and 10 To Midnight wound up being. Like Stuart Gordon, I haven’t seen nearly enough Charles Bronson movies with some Death Wish flicks, The Mechanic, The Dirty Dozen, Breakout and maybe a few others under my belt. It also wound up being a kind of movie that I don’t usually like–gritty, real life killer in the slasher role–that I wound up digging. Heck, I wasn’t even expecting a horror movie when I selected the movie. It was in my head because my buddy Rickey mentioned it over on his excellent VHS review site Crucial VHS when talking about Death Wish 4 the other day.

Honestly, had I not wanted to write about two of the three movies I watched in one post, I probably would have dubbed 10 To Midnight as an action/crime movie. I was going to say that it’s about as much of a horror movie as something like Dirty Harry where you wind up seeing a good deal of the action from the killer’s perspective, but as I write, I’m turning more towards the idea that this is actually a horror movie in the vein of Maniac or something like that. We spend about equal time with the killer–a young man with sexual issues who kills his victims in the nude (there’s a lot of man butt in this movie)–and the cops one of which is Bronson. Plus, there’s a good deal of blood in the kills. From the very beginning we see the face of the killer who actually looks like Josh Brolin, but isn’t and the movie’s kind of a cat and mouse game with Bronson crossing a line and planting evidence which he later admits to. Of course, this pisses the killer off and he winds up going after Bronson’s daughter. It’s interesting because, after the court scene, Bronson actually takes on the role of a slasher, constantly following the killer, calling him at all hours, breaking into his house and even hanging pictures of the killer’s victims at his place of work. That’s another reason I labeled this one a horror movie, though the flick’s never really scary even if it has it’s suspenseful moments.

All in all, I’m realizing it’s nearly impossible to go wrong with a Bronson movie. He’s just so cool and such a badass and he always does the thing that people want to do, but usually don’t thanks to moral or legal concerns. Plus, I love his freaking voice. People always say stuff like they could listen to someone read the phone book, I wouldn’t go that far, but I wish he had had a career as an audiobook reader before passing away because he could make even Tess Of The d’Urbervilles interesting (hate that book). Thanks to Rickey for putting this movie on my radar and Jesse for also encouraging me to watch it. Great pick bros!