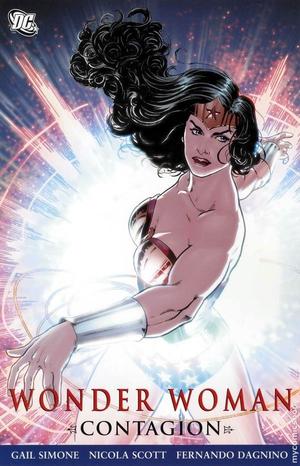 WONDER WOMAN: CONTAGION (DC)
Written by Gail Simone, drawn by Nicola Scott, Aaron Lopresti, Chris Batista, Fernando Dagnino & Travis Moore
Collects Wonder Woman #40-44
Post Infinite Crisis, Wonder Woman was one of the books that made me leery. I didn’t really care about Wonder Woman taking on the Diana Prince persona and becoming a government agent. Generally, I find the drive by some creators to go back the Silver Age, incomprehensible. The lateness of the book didn’t help either. But, I later went back and read those early Alan Heinberg issues in trade format and wound up really digging them. I would go on to enjoy Gail Simone’s run on the book as well though I’ve only posted about Rise Of The Olympians for some reason. Well, once news hit that JMS was taking over Wonder Woman, I was bummed because I thought DC had a good thing and might have been getting rid of Simone’s longterm plans for a story and costume that were immediately panned. I read the first few issues of that run and actually enjoyed them, but I got the feeling after reading Contagion, Simone’s last volume of WW (for now at least), that she was cut off a bit early.

This book feels a little all over the place. You’ve got elements from the previous volume, which I believe I’ve read, but didn’t blog about it and if I kept the trade it’s buried in a longbox in the closet because my shelf is full. So, I’m a bit lost as to what happened, why Etta Candy is in the hospital and what happened between Rise and this volume that they still haven’t found Genocide’s body (there’s a pretty big issue gap there). Those are just bits and pieces of the story though. The first two issues feature a giant snake god and bunch of little kids who have the ability to drive people crazy, including Power Girl who winds up throwing down with Diana. After that’s all figured out, a race of woman taken from various planets called The Citizenry has come to Earth to absorb its resources and take the 100 best and brightest women. Wonder Woman gets to show her stuff and, with the help of her allies, holds them back just in time for a nice group shot panel to end the book. In the end, the last issue felt like the end of an arc, not a run. Adding to that, the kind of Galactus and Storm Vs. Callisto for control of the Morlocks elements mean this one doesn’t feel like a swan song. Making matters worse, some of the artwork in the last few issues looks really bad. I’m not sure whose it is because there’s two or more artists working on the pages, but it seems like the pencils were rushed through to color without being inked. The result is some really unfinished pages that hold up like a kindergartner’s artwork compared to pros like Scott and Lopresti.

As a fan of the book, it’s a bittersweet collection because it completes my collection of this volume of Wonder Woman, but it’s not one that really wowed me or felt like a good conclusion. It’s not in Ex Machina territory where I’m still wondering whether I want to keep the entire series or not. Instead of feeling like a creator failing at the end, this one feels like the creator was not given the proper chance to close out a book she had been working on for quite a while. 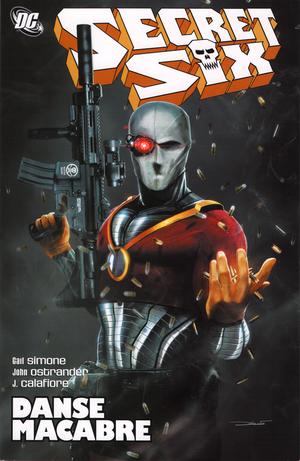 SECRET SIX: DANSE MACABRE (DC)
Written by Gail Simone & John Ostrander, drawn by Jim Calafiore & Peter Nguyen
Collects Secret Six #15-18, Suicide Squad #67
After reading Simone’s last volume of Wonder Woman, I remembered I had a Secret Six trade in the to-read pile and figured they’d make a good pair for today’s Trade Post. Danse Macabre is an interesting collection because the first story was written by Ostrander and features Deadshot dealing with the death of Batman. It’s a great call-back issue to the writer’s run on Suicide Squad, which heavily featured Deadshot, but still fits pretty seamlessly into the world of Secret Six. From there the book has more of an 80s feel in that, while there is a definite arc collected, the elements flow into one another in a way that reminds me of Iron Man and Secret Six comics from back in the day. Black Alice, a magic-based character Simone created in her first run on Birds Of Prey, makes it known that she wants to join the team. Then we’re right into Blackest Night territory.

As regular readers will remember, I just finished reading the three main Blackest Night volumes, so the story is all pretty fresh in my mind. Partway through that series, DC announced an interesting idea: bringing some canceled series’ back from the dead. One of those was Suicide Squad and that issue is collected here because it’s less a one-shot for Suicide Squad fans or people super-into Blackest Night and more of a part of the regular Secret Six story. Seriously, Black Lanterns only appear in the beginning and very end of the issue. I can’t imagine how frustrated people must have been who were concerned about staying caught up on BN and got something that doesn’t really add to anything in that vein. It DOES add to the Secret Six story and is thus necessary to include in this volume.

Okay, back to the story. I think Simone did a pretty good job of including Blackest Night elements in her story. It really makes sense for this group to interact with dead heroes and villains because they’ve put more in the ground than anyone else. It’s also nice to see the Suicide Squad connection that’s running through the book as Amanda Waller sends them on a mission to distract the Six so she can attack Scandal back at the base. The story would be interesting on it’s own, but then you’ve got the looming threat of the Black Lanterns which adds another level of conflict and winds up throwing the Six and the Squad together at least for a bit. I even liked how Waller had an ace in the hole that wound up getting rid of the immediate threat of the Black Lanterns. Most of the tie-in books had something similar, but they usually relied on existing characters with light powers that wound up having no bearing on the larger story. Instead, Waller uses hers like a weapon, points it and blasts them to hell.

One problem I had with this book, and it has nothing to do with the story itself, is that I am completely confused about the Suicide Squad’s recent history. I dug Ostrander’s mini from a few years back and Waller’s appearances in Checkmate, but ever since Salvation Run, It’s been fuzzy in my mind (mostly because I didn’t read that book). I know Bane was on the team for a while as was Deadshot, but then they left or got thrown into that prison planet? It makes me want to go back and read Secret Six again going back to Villains United. Maybe it’ll be a project read down the road.