After last week’s episode, MTV showed a series of clips that not only spoiled the mystery that their new roommate was a girl, but also a whole lot of drama. I wasn’t sure if that was just for this particular episode or a kind of “now we can show you more of this season because Adam’s gone and Cooke is in.” Well, it was the former. This episode was chockablock full of all kinds of crazy and mostly a whole bunch of different crazy than we’ve seen so far this summer. Relationships are tested, some are broken, truths are revealed, fights break out and some very drunk people get very upset about an innocuous hand gesture. Intrigued? Hit the jump to see the score.

The episode kicks off with new roommate Cooke rolling in. She’s a boy-crazy, soccer player who’s coming to Vegas looking for a good time. As soon as she walks in the door Nany’s pretty cold to her. Basically she’s resentful because she’s literally taking Adam’s spot and she’s still head over heels for that asshole. Naomi also doesn’t take a shine to her, possibly because Leroy starts being nice to her right away. There’s even some girl time with Cooke sitting on her bed and the other three literally sitting across from her being awkward, it’s like a freaking interrogation. By the way, Cooke’s rooming with Dustin and even offers to switch beds with Heather so she can room with him, but Heather wants none of that. Meanwhile, Dustin’s talking to the guys in the kitchen and says he’s nervous about rooming with the girl. He wants to trade with Mike or Leroy, but Mike says there’s no breaking up Lil’ Roy and Big Mike. There’s also a bit where Nany calls Adam and complains about the new girl, but Adam actually gives her props for coming into a crazy situation like that. And Dustin calls Naomi and Nany out for being catty in the first few minutes. Boy oh boy, does it get worse.

And a big reason it gets worse is because of something Cooke said while getting some food at Pink Taco with Mike, Naomi and Nany. They’re just kind of bullshitting and talking and Cooke says they should get to breaking up Heather and Dustin because she’s hot for him (do people still say “hot for?”). The girls and Mike both get really defensive and then we get cuts to Nany and Naomi talking all sanctimoniously about how awful she is and how she should know her place. These two broads really know how to kick up the douchiness to 11 and do so for the rest of the episode. I’d like to remind them that they were chosen to be on Real World, not Most Deserving Person In the World. You’ve been scientifically chosen to create a tense household that begets interesting television. That’s all you are. It’s up to you how you become interesting (or become insufferable) and unfortunately Nany and Naomi definitely slide into the latter category with this episode. 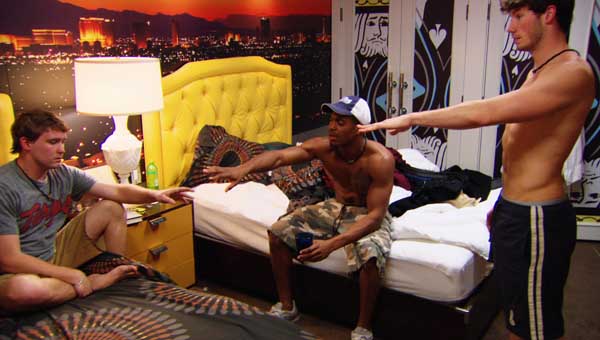 From there the break up quote gets spread around the house, first to Heather, then she tells Dustin. This makes Dustin feel uncomfortable which leads to one of the more curious confrontations of the episode. He goes into Leroy and Mike’s room and says how he’s in a pickle, but Mike’s unimpressed. Later, Heather comes into the room and Mike says something about Dustin throwing Heather under the bus and Leroy saying that they should be sleeping in the same bed. She goes and talks to Dustin about this, then he’s back in their room and gets into a dust up with Mike. Mike says they’re not really friends and that Dustin is always coming to him, but there’s no real friendship there. Both Leroy and Mike say he’s changed. I know these guys had their problems, but this seemed to come out of nowhere (one of the problems stemming from cramming several months of peoples’ lives into45 minute episodes). I do wish the producers would have given a little more space to this storyline because it doesn’t make much sense and then isn’t really a problem afterwards.

That night, Dustin mopes around the suite while everyone else goes out to The Palms to party and celebrate Cooke’s first day at the house. While out, another seed of tension is placed when Cooke sits on Leroy’s lap and explains to him that she sees Dustin as a project for her. Naomi sees this and starts getting pissed. The funny thing is that it has nothing to do with her or even them trying to get together, but something else altogether. Naomi reserves the full force of her rage for the next night, but the thing that drives me nuts about all this tension is that Cooke doesn’t know any of the history. I’m sure no one sat her down and was like “Oh, Naomi and Leroy hook up sometimes.” So, you’ve got Naomi getting furious at someone who not only has no idea why Naomi’s getting angry, but also has no designs for him regardless if she borrowed one of his T-shirts to work out in the next day. To Naomi and Nany, though, this is a sign of ill intent. 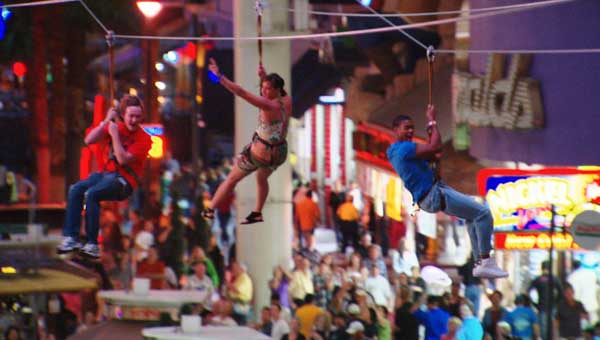 From here, Leroy, Mike and Cooke have something that people in Vegas are supposed to have: fun. They head over to Fremont Street which looks like awesome tourist central. They run around, having fun and Mike gushes over how much he likes having someone else there who just wants to see everything and have a good time. They even do this zip line thing that goes over the whole strip area that looks amazing. Even Leroy likes it and the dude hates heights. While they’re out doing their thing, Naomi tells the camera that she thinks Mike and Leroy are disgusting traitors. Methinks you’re taking your one month relationship with these people a little seriously. Again, you’ve been cast in a show, you’re not blood relatives with ancient history.

Mike, Leroy and Cooke meet up with the rest of the gang at the club and things get pretty weird pretty quickly. There’s some immediate coldness and the three that actually know how to have fun broke off on their own a bit, with Leroy dancing with Cooke. This sets Naomi’s fuse that much shorter. Then, Cooke and Mike are talking about something, Cooke makes a hand gesture and Heather thinks she’s pointing at her. She then goes to her two bitchy cohorts and mentions it. This sets them both off, but it’s Nany who goes over and gets in Cooke’s face about “pointing at Heather.” It’s incredibly ridiculous and Heather can play the innocent bystander in all this, but she is the one who told the other, cattier pair about all this. Leroy gets between all this and takes Cooke up to the room where she gets out of her party gear and gets in bed. Back downstairs, Naomi’s all worked up and wants to get in Cooke’s face.

Which she does. Nany and Naomi burst into the suite shitfaced and pissed. Both claim to be angry about Cooke supposedly pointing at Heather, but Nany’s pissed because her douche boyfriend is gone and Naomi because her hook up is talking to someone else. Earlier in the episode, Naomi explained to the camera that she had no problem with Leroy hooking up with other girls, but saw it as a sign of disrespect if it was with a roommate. Just before all this blew up, Dustin told Leroy that the reason Naomi is so angry is because of their thing, to which Leroy responded and reiterated later that whatever their situation was, it’s done. And with the way Naomi behaved that night, I can’t blame him. She walked into Cooke’s room and started screeching at her until she woke up, then got in her face about throwing dirt on Heather. Mind you, Cooke has NO idea what’s happening. Then Nany gets involved and is just venomous for no real reason. Dustin’s in there tossing Naomi away from Cooke on his bed and trying to keep everything peaceful, but they’re both just nuts. Soon Mike comes in and tells Cooke she can come into his room and things finally seem to calm down. 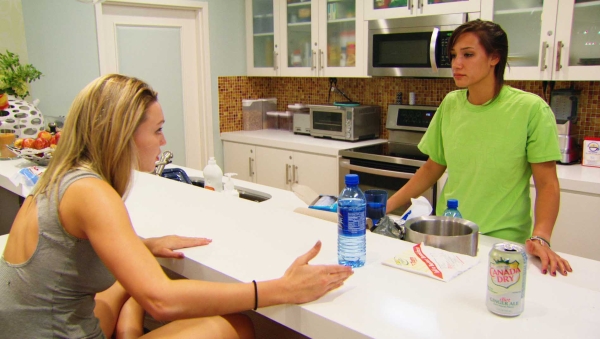 The next day, there’s lots of talking about all this. Naomi and Nany, being the mean bitches they are, have no remorse for what they did and think they’re in the right. Dustin’s in talking with the guys about how ridiculous the night before was. Mike apologizes to Dustin about their tiff earlier and Dustin says he thinks all this will make them better friends. Then Dustin goes and talks to Heather who says she doesn’t like what Cooke said about breaking them up, but doesn’t hold a huge grudge or anything. Then Dustin talks to Cooke. She thinks it’s bullshit that the new girl is supposed to go to the three girls who know each other so well and apologize to them, thinking it should be the other way around. Cooke explains that she was just joking with what she said about breaking them up and that she didn’t really know the situation. Then Cooke talks to Heather and they really seem to squash their differences. Both seem to think highly of the other and neither are too butt hurt about what went down.

A lot went down this episode, most of which wasn’t good. Naomi and Nany fell really far in my rankings and now lie just a little above Adam who I despise. They keep this junk up and I’m done with them. I love the Leroy/Mike dynamic and could watch a whole show about that. Dustin’s a strange one. I don’t really know what his deal is because they mostly show him trying to predict the future, talking about Heather or breaking up fights. But it seems like there’s more going on there, and the whole “naked web cam” thing has to break out eventually. Cooke definitely has a conniving nature that could prove disastrous, but she’s easily made herself more likable than Nany and Naomi. Heather keeps playing the sweet and innocent role, but I get the feeling there’s more going on there than she/the producers are letting one. From the “this season on Real World” clip they showed at the end of THIS episode, it looks like it’s going to be a doozey. Can’t wait to see what happens.