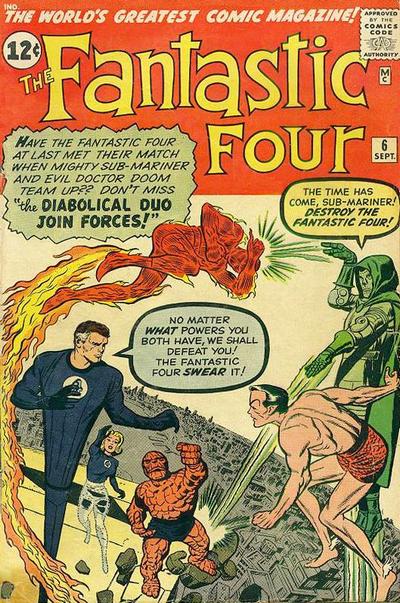 Much like the first appearance of Doctor Doom in Fantastic Four #5, the supposedly epic team-up between big bads Doctor Doom and Namor came off less awesome than I hoped. First off, Doctor Doom comes across Namor as he’s swimming with dolphins. Soon after the pair decide to team up and you can see Doc Doom rubbing Namor’s shoulders, consoling him like they’re both battered women in a Lifetime movie. So what’s the nefarious plan? Destroy small continent with the Fantastic Four at the epicenter? Nope. Flood New York City and hope to get the FF? Nope. Plant a device in the Baxter Building that will shoot it and all inside into space.

ToyFare fans might remember this gag as being Doctor Doom’s go-to trick in the pages of Twisted ToyFare Theater. That’s where I first experienced the story element. I thought it was pretty funny and figured it was based on maybe an aspect of one of Doom’s plots, but never imagined it was lifted directly from an issue of FF. For that, the issue was fun to read.

I also enjoyed a few of the smaller moments. You see a few guys who don’t believe that FF actually exist. I think these kinds of moments are dumb when done in big shared superhero universes today (how could anyone not know that Batman exists, he’s on the friggin’ JLA), but it makes sense in the early days of the growing Marvel Universe. I also liked seeing a full building schematic of the FF headquarters as well as Sue using a special belt device to gain entrance. I think my favorite moment, though, was when Mr. Fantastic stretched from their HQ across NYC to pop in and talk with a sick fan who asks him about their costumes! This is probably the first explanation of Unstable Molecules and I like how fanboyish the set-up is. The kid isn’t being Comic Book Guy and trying to poke holes in things, he’s just curious. I like that. Aside from those moments, there’s more sad sack Ben Grimm and the usual Silver Age goofiness.

The one thing that bums me out a bit about reading these stories is that Jack Kirby hasn’t come into his distinct, kinetic, amazing style, the one I’ve come to know and love over the past few years. You can see little bits of pieces of what’s to come in some of the inventions and machinery, but Thing still looks like a lump of rock and Doom’s no where near as cool as my idea of Kirby in his prime drawing that villain. I can’t wait to see him really come into his own on this book, though I hear it doesn’t happen still for a little while. Ah well, I can stick around.