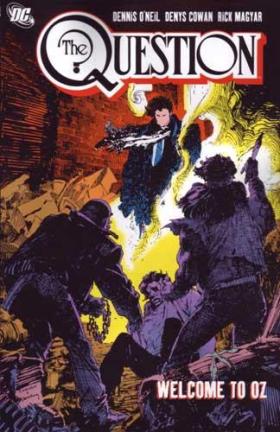 I really wish I had read all of the Dennis O’Neil’s The Question together. I didn’t write about the first or second volume, but gave a brief summary of my history with the character while writing about the third volume. I noted then that I liked how the story threw plenty of curveballs at you as a reader and realized while reading the last three collections–which finished out O’Neil’s run on the book–that this book feels like it would make an excellent TV show. There’s solid, interesting characters who all feel very real (read: flawed), some situations that take place in a single issue while others spread themselves out over arcs as well as thrilling action. Since, for the most part, this series takes place outside the DCU (there are no superheroes, though a few costumed vigilantes show up) you actually feel like some bad things can (and will) happen to masked vigilante Vic Sage.

This volume deals with the politics of the ridiculously corrupt Hub City as the mayor’s wife runs for mayor herself. It’s kind of shocking how timely some of the political talk sounds today with the way right wing nuts seem to have taken over the conservative landscape. In addition to the political stuff, which is interesting in its own way, there’s also a series of decisions made that lead to crazier and crazier action, from a clown getting murdered to a fight with a biker gang during a tornado. There’s a lot of build up in this volume that leads up to a pretty shocking final page (I think I did a high pitched “WHAT!” when I got to the end) which makes for a satisfying read in and of itself but also leads so well into the next one that I picked it up right away and got to reading!

I know I said above that this book didn’t have much interaction with the DCU, but this volume does feature a pretty wonderful Christmas issue in which the Riddler decides to ditch Gotham in favor of Hub. On the bus ride he meets a crazy broad who wants to kill a bunch of people. It’s the perfect example of what I was talking about above where these episodic things happen in the middle of a much larger story. This time around the overaching story deals with Sage veering towards exhaustion as he tries to clean up his disgusting city and take revenge after the end of the previous volume.

We also get to see Lady Shiva in some of her better appearances. She’s one of those characters who seem to be invented just to show how awesome other characters are. “She’s the best fighter in the world…except she looses to EVERYONE.” In O’Neil’s hands, she’s actually handled effectively, like a coiled spring ready to go off at any time. Her incredible fighting skills also lend themselves to the story as it progresses.

There’s also an issue that I found fascinating. Sage’s adviser Tot has a brother who was a comic book artist during WWII. This dude claims to have helped win the war because he and so many other people were writing about America getting involved with and eventually winning the war. It’s a really heady idea that I enjoyed wrapping my head around and probably has some fun interpretations and evidence out there. Anyone know if this is a thing that people really believe in? I’d be curious to read more about the concept.

Any time I read a series like this, I get a little worried towards the end. You never know if the creators knew things were coming to an end or not and sometimes these things are not always handled well. But, thankfully, it seemed like O’Neil knew what was happening and not only gave a very satisfying ending, but also left a few breadcrumbs that could have been followed later on down the line. It felt like a very satisfying conclusion like the best TV shows do.

Let’s call this SPOILER TERRITORY because the end of this book leads to some pretty interesting stuff you don’t see in a lot of Big Two comics. At the end of this book, after getting really messed up, Vic Sage winds up leaving Hub City along with most of his cronies–Shiva stays around because she thinks hanging out there will be an interesting physical challenge for her. The hero quit! You NEVER see that, but it was cool to see it this time around. I mean, he doesn’t quit the hero game altogether, but everyone in the book realizes that this place is just too much of a mess for them to handle and they bounce. Batman wouldn’t do that, but Bruce Wayne might if he wasn’t a millionaire, you know. Sage is just a news reporter which is the perfect job for a vigilante (and handled better in this book than in most of the Superman comics I’ve read). I like seeing things in books like this that I’ve never seen before. Otherwise, you’re just reading the same stuff over and over and over again and where’s the fun in that?

You should read this comic book. I think the only road block for some people might be the art by Denys Cowan. I mentioned in my post about the third volume that his artwork might seem kind of sloppy to some folks, but it has a weird kinetic energy to my eye. That style also works so well with the story that I can’t really imagine it being told without his Bill Sienkiewicz-esque style. This is a story about a man fighting such huge corruption against impossible odds in the shadows while trying not to completely lose any sense of himself. Cowan not only captures that, but also never misses a beat when it comes to pacing and clearing showing action and acting in ways that lots of guys don’t.

Like I said above, I liked these three volumes so much that I want to give all six volumes a read back to back. I honestly don’t remember what happened in the first three trades, but I now get the sense at how well planned-put and fluid O’Neil’s tale is. I’ve read lots of his comics in the past, but this one is currently the one that intrigues me the most and makes me want to read even more of his stuff. Maybe I will finally, FINALLY read the Green Lantern/Green Arrow stuff that I’ve had sitting around for literally years but have never gotten further than a few issues into. That’s a subject for another post, though.

If you like action, adventure, political intrigue, corruption and one man’s struggle with attempting to achieve the impossible told in an excellently episodic fashion, do yourself a favor and get your hands on these books. I haven’t been this unexpectedly swept up in a series in a long time and it rejuventated me a little when it comes to trying some of these older series’ that I don’t know a lot about.