THE QUESTION VOL. 3: EPITAPH FOR A HERO (DC)
Written by Dennis O’Neil and drawn by Denys Cowan
Collects Question #13-18
The Question’s one of those characters I never had much of an opinion about good, bad or indifferent. In the early 90s when I was coming up in comics, he wasn’t really around, which is surprising. You’d think he would have made some appearances in Batman or something, but I don’t really remember seeing him until years later. My first real exposure to him was in 52, which was fantastic and, of course, lead to his death. He was also really great in the JLU cartoon. The two of those were enough to get me interested in reading his series from the 80s. Luckily, DC started reprinting them a couple years back and now we’re up to six volumes at last count. I’ve read the first three and liked them all.

There’s an interesting subsection of DC comics from the 80s that were basically set in the real world or at least ignored the super hero aspects of the greater DCU. Mike Grell’s Green Arrow book was a lot like that and so was The Question. This volume includes the first meeting between those two versions of the characters. The stories are mostly one-offs with a political bent following the Question as he rights wrongs. What I like about the book is that it continually throws curve balls. The racist cop throws himself in front of a bullet. Green Arrow and Question don’t become buddy buddy right away. They’re not huge twists, but enough to keep the story flowing and interesting. Cowan’s art might be considered sloppy, but I think it’s got a strange energy that actually lends itself to the types of stories O’Neil tells. Personally, I’d rather see him using the style he did on Hardware, but, like I said, it works. I recommend giving the first installment of this series a look if you’re interested in more grounded mystery adventure comics with something to say without drowning you in it. 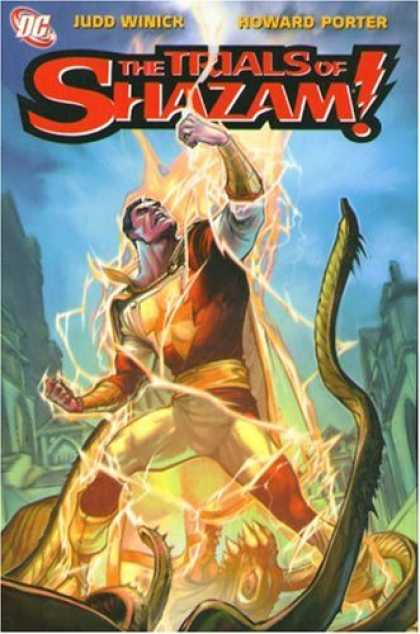 THE TRIALS OF SHAZAM VOL. 1 & 2 (DC)
Written by Judd Winick, drawn by Howard Porter and Mauro Cascioli
Collects Brave New World 1, The Trials Of Shazam #1-6 and 7-12
Captain Marvel’s another character I’ve known about, but never really felt one way or the other. He was used incredibly well in Kingdom Come, I liked him in JLI and JSA, plus a few appearances here and there. The character has gone through a lot of changes over the past few years. Infinite Crisis rewrote the laws of magic in the DCU, the Wizard died, Mary Marvel went absolutely crazy and Billy had to take over as the Wizard. That meant that someone had to take over and the mantle fell to former Captain Marvel Jr. (or CM3 as he was called for a while) Freddy Freeman, which is where this maxi-series picks up. See, Freddy has to meet up with a series of gods–the ones who make up the name SHAZAM–go through trials and get those abilities.

Winick puts on a good story with Freeman starting off nervous about the whole thing and turning into a dog gone hero by the end. The problem is that the story’s a little long. It could have been cut down to 7 or 8 issues and been a lot tighter. Another negative thing about the book isn’t really its fault but DC’s and that’s that the character of Captain Marvel hasn’t really been used since the end of this book. I know he’s shown up a few times, but his supposed inclusion in Cry For Justice turned out to be a ruse. So, you finish reading this pretty great story, which is basically an origin story. And what’s the first thing you want to do after reading a character get set up like this? Read more of his adventures. Too bad there’s no where to turn. I’d like to see Freddy as Captain Marvel leading some kind of magic oriented team like the Shadowpact or some other concoction.

Art-wise, it’s an interesting affair. Howard Porter, whose style I loved in JLA, changed things up and it looks…I don’t really know how to describe it. Less crisp? JLA had the sharpness to it that I really liked, but this is a little sketchier. It’s not bad by any means, just not what you might be expecting from a Porter comic. He was replaced by Mauro Cascioli whose art I like, but goes from looking really awesome to really wooden sometimes from panel to panel. Overall, I liked the story and the art, but I won’t be keeping these books on my shelf.

BUFFY THE VAMPIRE SLAYER OMNIBUS VOL. 4 (Dark Horse)
Written and drawn by a bunch of folks
Collects Buffy #9-11, 13-15, 17-20, 50, Annual 99, Angel #1-3, Wizard 1/2, Lover’s Walk & Dark Horse Presents #141
Buffy fans who weren’t reading the Dark Horse comics back in the day while the show was on have no idea how good they’ve got it. Now, the comics flow directly from the show with Joss Whedon heading things up (at least that’s what they say) and, for the most part, are damn good. Back in the day, though, the comics weren’t so good. They weren’t bad, but they were saddled with keeping their stories set in earlier seasons so as not to interfere with or contradict the show. I bought those comics for two years and actually quit reading because of the main story in this Omnibus. It took a long time to tell, I couldn’t remember all the details and I was sick of reading about Buffy in high school when she was going off to college and having completely different adventures. I actually sold those books on eBay in past year or so.

The thing about these Omnibi is that they collect the stories in chronological order by season. It’s actually really interesting editor Scott Allie’s forwards in these books as he explains the thinking behind that and how the stories inside came to be. All that being said, I was surprised to find that I enjoyed reading this volume and got through all 368 pages in one night. The main story is called Bad Blood and features am image-obsessed vamp from an earlier comic appearance coming back and forcing a doctor to use science and magic to create a new kind of blood that made super-vampires. Reading it all together was a much more satisfying experience, but I also found a nostalgia going back and reading adventures set in Buffy’s high school, as those have turned out to be my favorite seasons.

The rest of the book has short stories here and there. I probably shouldn’t have tried to read the whole thing in one setting because the stories have a definite rhythm that gets really repetitive when you read them in a row. If you’re a Buffy fan, these are good books to pick up, but I would imagine you already have. If you’re not a Buffy fan, well, I don’t think this book will make you one.