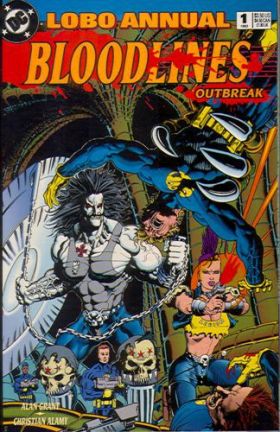 My continued adventures with the longbox of comics my pal Jesse sent me for my birthday from Cardsone took me back into the world of Bloodlines, the history of one of the coolest G.I. Joes around and into the first of many CrossGen comics I’ll be reading.

My first pick up was Lobo Annual #1 from 1993 written by Alan Grant and drawn by Christian Alamy. It was actually a pretty interesting one as it’s an early chapter in the saga that would become Bloodlines, an effort to bring some new, edgy blood into the DC Universe by way of some aliens based on the seven deadly sins who eat people with the metagene. Back when Bloodlines was actually coming out, I didn’t have enough cash to purchase annuals at their whopping $3.50 cover price. Add the fact that they had no real real importance on what happened in the ongoing series’ and I skipped out.

The interesting thing about this issue, in addition to teaming Lobo up with a female character named Layla who took no guff from him, this issue explains how the invading parasite aliens wound up getting their human looks: by mimicking the looks of some L.E.G.I.O.N. agents they took out.

Lobo’s the kind of character you either dig or you don’t, I do so this was a fun issue. I’m also a bit of a fan of L.E.G.I.O.N. and R.E.B.E.L.S., though it’s more of a curiosity since I didn’t read the books when they came out. On it’s own, the issue actually works pretty well and it also holds some sort of importance on the oncoming Bloodlines story, but it was worth the read, though maybe a little long as these things tend to be. 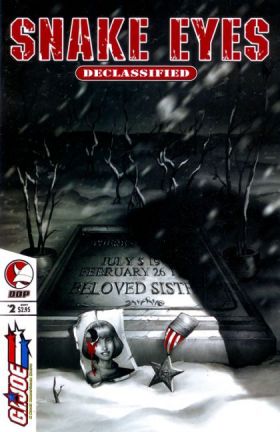 Up next came Snake Eyes: Declassified #2 from 2005 which I did not have nearly as much fun with. The Devil’s Due book was written by Brandon Jerwa with art by Emiliano Santalucia and Robert Atkins. I had a pair of problems with this comics not including the fact that I’m not a die hard G.I. Joe or Snake Eyes fan. First off, the story is very obvious. The man who would become Snake Eyes winds up hooking up with a guy who is clearly using him. As a reader you get this nearly immediately, so the following pages wind up being kind of pointless. My other problem is one that I’ve had with several comics and that is that the art just doesn’t feel up to snuff. It’s not bad by any means, but it’s not as good as you would expect from a professional comic book you theoretically would have paid three bucks for. The backgrounds are boring, the figures vary between strong and weak and the coloring feels very faint which makes the characters feel less bold and imposing.

At it’s heart, though, this is basically just a comic about two dudes running around committing crimes. That’s all well and good, but when you know one of them is going to become the greatest ninja warrior around, you kind of don’t care and just want to get to the good stuff. One of the problems with prequels is that we all know the foregone conclusion, so we know when risks are involved. This felt like it could have been told in a simple flashback instead of taking up an entire issue. 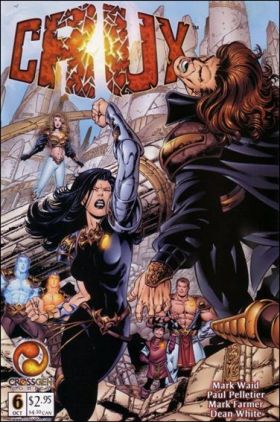 Lastly I came out of the box with CrossGen’s Crux #6 by Mark Waid and Paul Pelletier. This was a bit of a difficult issue to pick up on out of nowhere because it directly deals with an important event that happened at the end of #5. It’s well recapped–as are the characters and their abilities thanks to a recap page on the inside cover–but you do miss a bit of the emotional impact of something when you’re reading about it in text or in recap.

Of course, this is an ongoing comic book and that’s the trick to them. I was filled in enough to understand the story and follow along. This book is about a bunch of super type beings waking up on an Earth that’s empty and they’re trying to figure out why. There’s a few revelations that pop up, but again, since I’m not as invested in the characters or the story, they don’t hit as well for me.

Probably the most confusing element of this book and most of the other CrossGen comics I read, though, comes from the fact that a very disparate number of books on all kinds of different worlds are supposed to be connected by the sigil symbol some of them sport that looks unsurprisingly like the CrossGen logo. I still feel like CrossGen could have been a success had they not flooded the market too quickly and labored so intensely to connect all these comics that didn’t need to be connected.

By the way, Paul Pelletier is an awesome artist.