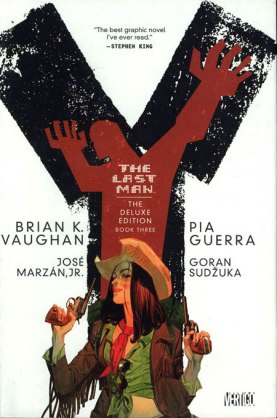 Re-reading Y: The Last Man has been an interesting experience (peep my reviews of the first and second volumes of the deluxe hardcovers for more background information and my thoughts on those books). One of the most interesting aspects of this read-through is that I’m starting to see some of the book’s problems. Y is one of those books that is so revered that you forget that it has its flaws, some of which I also saw in Ex Machina. One of the biggest things I’ve noticed this time around is that way too many of the characters in this book spout off trivial bits of information in an effort to make the events of the issue contextual or more emotional. About halfway through this book, that became really evident to me. Writer Brian K. Vaughan even pokes fun at it a few times with characters interrupting each other saying things like, “We don’t have time for that.” Unlike star Yorick’s annoying immaturity in the first volume, though, which is more an aspect of his character than a misfire by the author, this particular bit seems like a problem on the creative end.

Even though that got on my nerves while reading through this large volume, I still enjoyed this portion of the story, much of which I had forgotten after my first reading binge leading up to the book’s final issue. In the continued adventures of Yorick, Dr. Mann and Agent 355, we definitely hit some milestones and then kind of blow past them which is fun. This one volume includes Yorick finally giving into his primal urges, the beginning of Hero’s redemption, the reveal that Yorick’s girlfriend Beth is definitely alive, the crew getting to San Francisco, 355 facing off against some Culper Ring fanatics, Yorick almost dying, the explanation of why Yorick and Ampersand survived, a ninja, Ampersand getting monkeynapped, a transatlantic journey with lady pirates, an unexpected hook-up, a submarine, drugs and a few dream-based sci-fi and superhero vignettes that were a lot of fun.

It’s a lot and I liked the flow of the book. I like how, roughly at the halfway point, Vaughan decided to really open the story up and move around in this new world. It would have been easy to just stay in the U.S. and keep examining all of the crazy tiny groups that have popped up. I also like how casually the story transitioned to San Fran where Dr. Mann’s back-up samples were. One issues opens and, boom, they’re there and the city is actually pretty nice with the lights on and even pro basketball games in a stadium. It’s a pretty nice little set-up and you think, “Hey, good for them, they can finally relax,” and then BLAMMO Ampersand gets kidnapped by a ninja and the adventure continues. This also rekindles Yorick’s original goal which is to find his girlfriend Beth who just so happens to be going through a ton of crazy stuff on her own in Australia. There’s even a moment in the book where Yorick says he’s given up on that idea, but now that he’s sailing the seven seas, he’s back on that idea and it doesn’t seem as crazy as it did in the first book.

As an interesting aside, my wife and I just finished listening to the audiobook version of Brad Meltzer’s The Inner Circle which also features the Culper Ring. It’s interesting how these two writers used a historical idea and both went different ways with it. We don’t actually know much about the Ring in the world of Y, but we do know that they go by numbers — hence “Agent 355” — and seem to work in secret around the President and possibly above him or her. Meanwhile, Meltzer took the idea and continued it on, though instead of necessarily protecting the President, they protect the Presidency though sometimes a prez will create his own ring for various reasons. I can’t remember if there’s more about the Ring explained in Y, but I’m curious to see what else Vaughan does with it in the remaining two books.