Awkward Jayden Smith “freestyle” aside, this video of his dad reuniting with DJ Jazzy Jeff and Alfonso Ribeiro is a wonderful thing to behold. I bust out the Fresh Prince theme song, no kidding, at least once a week much to the chagrin of my wife.

Brian Cronin attacked one of the weirder arcs of comics I’ve ever read in his Abandoned Love column on CBR about the Justice League Task Force character Mystek who was apparently in the process of being sold by writer Christopher Priest to DC. when the deal went south and he killed the character. That’s all news to me!

I am very much looking forward to the July 10th premiere of Camp on NBC.

Chris Columbus directing a big screen version of Patrick Jean’s short film Pixels sounds like a fantastic idea. Plus, writing that last sentence lead to me rewatching Pixels which is, in and of itself, a fantastic idea. (via Collider)

THR reports that Paramount and Warner Bros. made an interesting deal recently. To get Christopher Nolan’s upcoming Interstellar fully under their roof, WB gave Paramount their share of a potential South Park movie and the Friday the 13th franchise. Hopefully this means a new chapter in the Jason Voorhees series.

It was fun seeing Arnold Schwarzenegger and Sylvester Stallone together in Expendables 2, but that movie’s a little goofy. I’m hoping Escape Plan is a bit more serious. The poster I saw on Collider is pretty rad.

Whoa, Amazon created something called Stroyteller, a program that allows you to upload your screenplay and create storyboards. I wonder how my slash script would turn out?

Stephen Merchant has a new show coming out on HBO called Hello Ladies. This is a good thing for humanity. 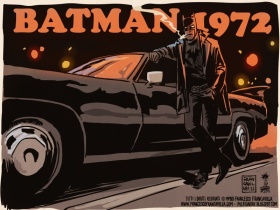 Francesco Francavilla‘s Batman 1972 – -dubbed Batploitation, though I personally think it should be Batsploitation — is amazing. This should be the next series of DC Nation shorts!