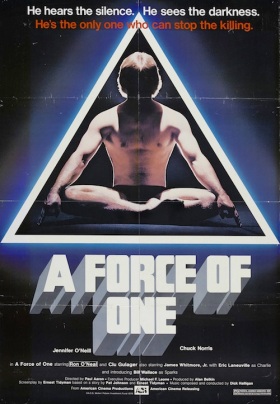 As a 30 year old dude, I have a unique relationship with Chuck Norris (boy, that sounds weird). I actually didn’t see many of his movies growing up, but as a personality and character he was unavoidable. I mean, he had his own cartoon and action figure line in Chuck Norris and the Karate Kommandos, how rad is that? Long before he was a meme orwhatevertheheck, he was training Jonathan Brandis, and hundreds, thousands, millions(?) of kids how to defend themselves. It probably wasn’t until Way Of The Dragon that I got a real, good look at what he could do, but before then I’d seen a few episodes of Walker, so there’s that.

In more recent days, or as I like to call them the Blog Era of my life, I’ve had some pretty bad luck when it comes to picking movies from Norris’ filmography. I’ve seen The Octagon and Code Of Silence which were bad and okay respectively and Hellbound which didn’t do nearly enough with its Chuck Norris vs. The Devil concept. And the less said about 2005’s The Cutter, the better. Yet, burned as I might have felt, I still got excited when I saw that his 1979 film A Force Of One was on Netflix Instant, I got excited. And, thankfully, it’s a pretty good movie, though not one exactly packed with breakneck martial arts action.

In this one, Norris plays a former military guy/current karate champ and teacher who gets recruited by the cops to help them figure out what martial arts master is attacking and killing the members of their undercover narcotics team. While there are definitely some martial arts scenes, this movie actually felt and looked a lot more like a Dirty Harry/70s revenge film than the kind of action-packed spectacle I wanted from a Chuck Norris movie (or maybe I have a completely off-base concept of what his movies are like).

And yet, between a few fights that take place inside a ring and an ultimate one between Norris and Bill “Superfoot” Wallace (who also happened to be John Belushi’s body guard) there’s enough to qualify this as a proper Friday Fisticuffs entry (as you can see by the above compilation of fight scenes from the flick). The problem is that, even though you might know these guys are legit fighters, they look like they’re pulling punches and not going all-out on screen. Maybe it’s time I focus and watch Lone Wolf McQuade, the Missing In Action movies, Invasion U.S.A. and the Delta Force flicks already.