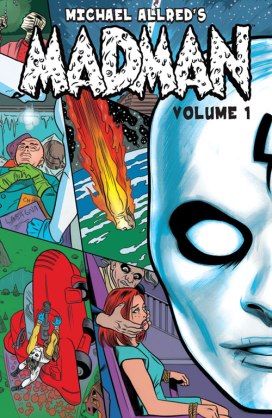 Madman’s one of those characters that achieved legendary status in my mind long before I read a single issue featuring the character. Not long after getting into comics I soon discovered Wizard which turned into my main source of news. While the mag mostly featured mainstream superhero comics, they’d also occasionally talk about indie books being done at the time. I remember reading about everything from Hepcats and Box Office Poison to Hellboy and Madman in the issues. Between that and Madman’s appearances in Kevin Smith films and the action figure aisle thanks to his Graphitti Designs figure, he seemed like a big deal.

As it turned out, my first real foray into the wild world of Mike Allred’s Madman wouldn’t come until I started working at Wizard. I believe I picked up a few of the Superman/Madman Hullabaloo issues when they came out, but don’t remember much of the experience. During my tenure at Wizard, though, Allred moved the book from its longtime home at Dark Horse over to Image where he not only started reprinting the original stories, but also kicked off a pretty mind blowing new one. I quickly fell for the new series and was on the hunt for the reprints.

I even got lucky and scored a copy of the first of three trades featuring the original stories. I read it at some point and dug it like crazy. Later someone passed me the third volume. Great! Only one more to go…cut to five or six years later and I finally have the second volume in my clutches. There’s no great story to the acquisition, I had some extra scratch thanks to my recent birthday, decided to buy myself some trades and figured it was a good time to close that gap. With all three books together, it seemed like the proper time for a read through.

Technically, the first volume consists of two three-issue miniseries’, but really, each issue is its own tale. The first three introduce us to a mysterious figure dressed in a white superhero costume who can read some minds when he touches them. He seems like a pretty good guy, but also goes off the handle every now and then. At least he feels bad about it. That first series introduces us to a lot of mainstays from the book who show back up in the second series, Madman Adventures. This feels more like the traditional Madman I’m familiar with from my later readings. Instead of dealing with clone monsters or murderous wannabe mayors, Madman goes on dates, travels through time, fights robots and helps save a 2,000 year old alien all while working with his mentor Dr. Flem and the increasingly brainy Dr. Boifford. The two books also kick off one of my favorite romantic relationships in comics: Madman and Joe.

When I first started hearing about Madman and maybe saw a few pieces of art here and there I got the idea that the book was filled with fun, retro imagery and light stories. While I was dead-on with the former, I was pretty far off on the later. In fact, the character of Madman is all about dichotomies. Even his name is a misnomer for the most part. This is a person with no sense of his self in the beginning of this book who can read other peoples’ minds with a touch…sometimes. In the first mini he rips a guy’s eye out of his face and chomps on it, in the same trilogy of issues he wonders why he can’t drop F-bombs. And while the art might make you think you’re looking at a cartoony book that’s all bright colors and fun, that’s only half the case. The other half finds our hero contemplating huge questions like “Why am I here?” and “Why can’t we fly?”

The beauty of Madman is simply how beautiful Allred decided it should be. It’s gorgeous to look at. Few cartoonists on the planet hold a candle to Allred in most fields. His wife Laura is perfectly suited to color this big, bold book. And yet the beauty isn’t just in the look of the book, it’s also in the words and the themes and all the wild, emotional places Allred decides to explore.