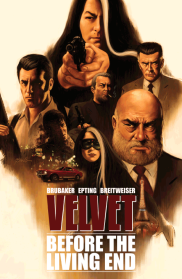 I was on a pretty bad streak when it came to trades from the library. Unfortunately, a lot of them just weren’t my cup of comic tea and then I got the first two Velvet trades by Ed Brubaker and Steve Epting, the team that launched the iconic and fantastic Captain America.

This Image series follows the title character, a spy-turned secretary-turned fugitive named Velvet who gets framed for the murder of a secret agent she had a history with. As the two volumes progress, we find out more and more about Velvet, the people chasing her and what happened in the past to lead to all this chaos.

Brubaker and Epting are both top notch creators in my book whose work I always enjoy and Velvet is no exception. She’s such an interesting, strong and dynamic character who you instantly side with because she’s the one seemingly being wronged (also, she’s awesome at spy stuff).

Plus, to my mind, you really can’t go wrong with a spy comic set in the 70s that looks and feels spot-on, which is exactly what this is. It’s made even better by the flashbacks to other eras, each of which feel perfectly designed and executed. As I mentioned I only read the first two trades and I believe there’s one more, which I’m very excited about reading. At this point, I should just start buying Bru’s Image stuff as soon as it comes out in trade because I’m always a big fan! 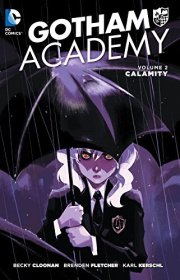 From Velvet I moved on to the second volume of Gotham Academy, which turned out to be another great experience, but for very different reasons.  All the good stuff I mentioned in my post about the first volume continues to ring true in the second, which is always a relief.

In this book the regular team of Becky Cloonan, Brendan Fletcher and Karl Kerschl continues to put Olive and her pals through the wringer as the ghost of Olive’s mom seems to be haunting the halls of GA. This, mixed with the knowledge that her mom was a fire-based villain called Calamity who may be back in action, leads to a variety of confrontations and mysteries that continue to suck me right in.

There’s a show on Freeform now called Dead of Summer that’s an 80s-set supernatural camp horror series that I’m really into right now. I realized that it and GA actually share a lot of thematic similarities. You’ve got young characters not only trying to figure out their present, but also deal with their past all the while encountering strange and fantastic events that may or may not be mystical in nature. I love that sense of intrigue and youthful emotion that permeate both. For what it’s worth, I also read the second volume of Batgirl and it just didn’t grab me this time. I think it’s great that that book exists, but it’s just not for me right now. 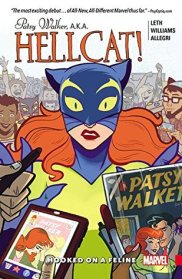 Finally, I read Kate Leth, Brittney L. Williams and Natasha Allegri’s first volume of Patsy Walker AKA Hellcat! I was a bit worried going in that I wouldn’t jive well with this book either, but instead I fell hard for it!

This series picks up where Charles Soule’s She-Hulk left off (I started reading that one too, but haven’t finished it yet) with our heroine working for the green lawyer (at least at the beginning). While tracking down mystical threats, she meets Ian, a regular guy turned super thanks to the Terrigen mists who can now move stuff with his mind. Sure, he robs an armored truck, but he sees the error of his ways and Patsy helps him return the cash.

Patsy wants to continue fighting evil while also starting a new business that will help set up powered and previously powered individuals with work. There’s also the matter of her one-time friend Hedy reprinting the teen comics Patsy’s mom wrote about their group years ago. Really, at the core, though, Patsy’s just awesome. She likes to fight, but she truly cares about people. She’s funny and serious when she needs to be, but also says amazing things like “Stop talking and take me to beer” all of which works really well for me.

One time a comic editor told me that the key to a great pitch at DC or Marvel is to make sure that the story could only be told in that universe. That’s exactly what Leth and company do here with a supporting cast that includes plenty of awesome Marvel characters, Terrigen mist-enhanced individuals and references to the old school Patsy Walker teen comedy comics from the 40s through the 60s. Bringing that all together in one delightful package is no easy task, which makes Hellcat all the more impressive, fun and rad!