I might have to rethink my position on werewolf movies. For a while, they just didn’t click with me, but after loving An American Werewolf In London and four Universal Monsters movies revolving around lycanthropes, I might be changing my tune! And thanks to picking up the big UM DVD set, I’ve been able to do a pretty deep dive on all (or most) things wolf from that era. Before diving into these films, I should probably try to figure out why I don’t usually like werewolf movies. I think one of the biggest drawbacks is coming up with a convincing or good transformation scene. It seems like the best ones have already been done, so they’re not easy to top. I’m also not much of a fan of the whole, “Am I a werewolf?!” question. You either are — and you have a story — or you’re not and who cares? Unless I really care about the character, them dealing with the horrors of becoming a monster just doesn’t work.

And yet, I found myself enjoying Werewolf Of London, The Wolf Man, Frankenstein Meets The Wolf Man and The House Of Frankenstein. I was actually surprised to find the first film in the Wolf Man box set because I’d never heard of it. I was even more surprised to discover that the 1935 flick preceded the more famous movie by six years and established a great many of the conventions of the werewolf mythology.

The movie itself focuses on a botanist named Wilfred Glendon who starts the film off in Tibet while searching for the mariphasa plant. During his quest he’s attacked by a werewolf, but after healing up returns home with the plant. Once there, he comes to realize he’s changing into a monster who comes out at night (though not only during the full moon, that came later). It…does not go well for him from there. It was fun watching this film so close to American Werewolf In London because it’s pretty clear that John Landis was a big fan and made a few nods to the then-50-year-old fright flick. It’s always fun to discover what feels like a forgotten classic and this one ranks up there for me.

Apparently, the film did not perform well so Universal abandoned the whole wolfen thing for a while until some of the other films were already into multiple sequel territory. By then, they hit it big with The Wolf Man in 1941 starring Lon Chaney Jr., Bela Lugosi and Claude Rains.

Even though Chaney’s Larry Talbot starts out as a creeper watching a woman through a telescope and then using what he saw to freak her out when he visits her at the antique store her dad owns.

As you might expect, Larry gets bitten by a werewolf — actually Bela Lugosi’s character, but played by a dog in the scene — and begins the road to feral attacks. As opposed to London, which went with a more human-looking werewolf, this film went all out by showing Talbot not only looking more wolfen, but also had him behave in a more animalistic fashion which fits what I’m looking for. 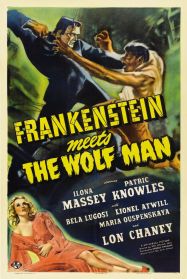 Instead of getting a straightahead sequel, Talbot next appeared in Frankenstein Meets The Wolf Man from 1943. In this film, grave robbers break into the Talbot crypt and accidentally wake Larry up. Not long after he comes to understand that he can’t die, so he finds the gypsy woman from the first film to try and figure out how to rid himself of this curse.

They head to Varasia to find Dr. Frankenstein’s notes, but after changing, the Wolf Man winds up in the wreckage of the castle last seen in Ghost Of Frankenstein (which I haven’t seen yet). After looking around, he finds the Monster (played by Lugosi this time) behind ice and frees him. They then come to know Else Frankenstein and get her notes which Dr. Mannering says he’ll use to de-power them. Instead he wants to see the Monster at full power which doesn’t end so well, especially as the village bar owner destroys the nearby damn. The two monsters battle as the waters rush in to sweep them away… 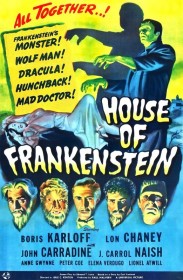 Leading right into House Of Frankenstein! Of the batch, this one’s probably my favorite because it’s just so bonkers. Boris Karloff plays a mad scientist called Dr. Niemann who breaks out of prison alongside his hunchback assistant Daniel and soon kill a circus owner in an effort to get to the ruins of Castle Frankenstein so Niemann can transplant Daniel’s brain into a bigger body. There, they find the two monsters from the previous film and thaw them out.

Oh, if you’re wondering what’s up with Dracula in this one, he’s played by the legendary John Carradine, but he doesn’t interact with Frankenstein’s Monster or the Wolf Man. Instead, his bones have been part of the circus’ freak show and Niemann wakes him up only to see the Count destroyed in the sun. Yup, that’s it.

I think what appeals to me most about these films is the fact that they’re so important to the werewolf mythology that just about everyone knows now AND that Chaney’s a super intriguing leading man. Even more surprising, he goes through a real arc as the movies continue. Talbot’s a pretty happy go lucky guy in the beginning and then BAM his life completely changes. He thinks his death will end the curse, but then the curse itself changes to include the fact that he can not die. His endeavors to fix that — either by healing himself, breaking the curse or dying — and deals with the highs and lows that come along. Plus, it’s just super cool to see the weird relationship between Talbot, Wolfy and Frankenstein’s Monster. In Meets, Wolf Man feels like he found a compatriot if not a friend, something we’re all looking for.