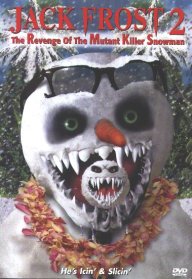 After enjoying the stellar An American Werewolf In London and having fun with Tucker & Dale Vs. Evil as well as Blood Diner, I kept looking around at various horror comedies spanning a variety of decades and styles. Some horror comedies play with the tropes of the genre while others just go all out with craziness you can’t help but laugh at. And I think that Jack Frost 2: The Revenge Of The Mutant Killer Snowman does both! I’ve gone on record as a big fan of the bonkers original and think writer-director Michael Cooney continued that spirit with the 2000 sequel. This time around Christopher Allport’s Sam Tiler agrees to go on vacation with his wife to a tropical island that the mutant killer snowman also travels to to exact his revenge.

It’s basically a mash-up of the Jaws sequels (Tiler’s super paranoid in the beginning and everyone writes him off like in 2 and the rest of the plot is basically The Revenge). However, much like Piranha, JF2 takes those ideas and uses them as a jumping off point for wacky humor. I think people write these movies off as straight-ahead horror films, but should check them out with an eye towards the intended comedy aspects built into the story and script.

Also, the cast is fantastic, especially Allport. He looks like he could play the dad on CW show without missing a beat, but also has this great delivery and timing that carries the movie. I was really sad to read that he passed away in a skiing accident back in 2008 because he had a ton of talent that more people could have utilized.

Okay, back to the funny. I wasn’t sure what to expect when I saw The Neon Dead pop up on my Amazon Prime radar, but I decided to give it a shot anyway. It’s a low budget zombie/ghost hunter 2015 film about a woman who moves into a new house that’s in the middle of zombie-infested woods, a fact she learns from a quasi Girl Scout trying to get her to buy cookies or something.

The scout tells her about a pair of paranormal investigators who work at a grocery store that still has a video store. They head out to help the woman played by Marie Barker and a full-on demon jamboree ensues. At times the tone reminds me of a Kevin Smith movie, but without going too, too far down that particular path.

This Torey Haas film features a wide variety of actors with different talent levels and some bad CGI add-on effects that probably should have been skipped, but I appreciate the effort involved and think it’s worth a watch if you’re look for something new to watch.

As I’ve said before, I’m far from an Evil Dead expert, but I can see how Neon Dead echoes some of the intents and ideas seen in that film from a low budget filmmaking and tonal perspective.

Finally, let’s kick it old school with another Amazon Prime selection, this one called Spooks Run Wild. I was sold on this one purely based on the fact that Bela Lugosi starred. I later found out that this film was part of the Bowery Boys/Dead End Kids/East Side Kids family of films that sent me down a Wikipedia rabbit hole starting with this film’s page. Basically, they’re a more grown-up version of the Little Rascals.

Leo Gorcey, Huntz Hall and a group of other East Side Kids actors appear in this film that sends the kids from the mean streets of New York City to a supposedly safer summer camp. While there, they start to hear word of a “monster killer” on the loose. In this case, monster describes the killer as opposed to the beings he or she kills, which can be confusing to modern eyes and ears watching this 1941 film.

Bored, the boys wind up in a big spooky castle that Lugosi’s Nardo and his little person assistant Luigi (Angelo Rossitto) after Peewee gets SHOT IN A CEMETERY! Yes, the groundskeeper shot a child walking through a cemetery with a shotgun. Anyway, while in the big spooky house, the gang gets separated, wanders around experiencing all kinds of strange encounters and eventually figure out the true identity of the escaped murderer.

Like with Evil Dead, I’m also no expert in horror from the 40s, though I am trying to get through a healthy dose of the Universal Monster movies this season (more on those later), but I thought it was interesting that Spooks felt like a proto-slasher film. You’ve got a group of teenagers running around the woods and a big house running for their lives. It’d be great if more slashers featured proactive kids you actually enjoy watching.

Which brings me to the comedy aspect of this film. A lot of it comes from the kids pointing out the absurdity of the situations they find themselves in with one-liners. Once again, this is a way of poking fun at the conventions of the genre but there’s also a lot of that human cartoon comedy that was popular at the time with the likes of The Three Stooges. With that in mind, the kids are never really in danger which allows you to just have fun with the story even though Lugosi looks super creepy and menacing throughout much of the film.