Last fall, I watched a ton of horror movies for various work projects. I also did a deep dive on newer entries on Netflix, Amazon Prime and other sources and had a lot of good luck with new films. I covered some of these in a post about new slashers, but wanted to get some of the thoughts down before they totally left my mind so here we go!

Southbound is probably my favorite anthology film in years. A lot of these feel like disparate creative forces coming together in an awkward package, but this one features a concise overall vision and tone that the filmmakers use to tell eerie stories featuring brainwashed families, crazy monsters and seemingly endless houses.

The first thing I thought when I finished this film is, “I’ve GOT to watch this one again.” I can’t even remember the last time I felt that with a horror film, let alone a newer one. Since it’s been a few months, maybe it’s time to get back to it! 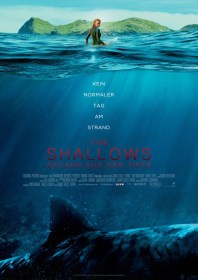 Jaume Collet-Serra’s The Shallows starring Blake Lively really surprised me. I’d heard mixed reviews ranging from positive to negative, especially when it came to the look of the shark, but I found myself fully engaged in those story about a surfer who gets stuck on a reef as a shark menaces her.

I don’t remember noticing anything odd about the way the antagonist looked and thought Lively did a killer job of carrying this whole film on her own back. It’s tense and scary and I winced more than a few times as she figured out ways to patch herself up. I’d also like to see the little bird she acted against get more roles. He or she has amazing comedic timing!

I also found myself checking out Mickey Keating’s Darling and POD both of which came out in 2015. Real talk? I fully did not get the first film which is shot in black and white and revolves around a young woman house sitting an old brownstone. She gets understandably freaked out by the big old house, but everything gets a lot crazier when she meets a guy at a bar and brings him back. I won’t get into the details, but there’s a lot of stuff in here that I didn’t like — screechy music over random jumpcuts, whispers, super loud telephones, etc. — but at the end of the day I was compelled by the film enough to dig futher into Keating’s other movies.

POD is more of a sci-fi thriller mixed with psychological drama as a brother and sister head to their parents old cabin to confront another brother who seems to have lost his mind after returning from the war. This one also randomly veers into the whole “intense strings” thing in the soundtrack when it’s not earned — it’s just a car pulling up, it’s not that big of a deal — but, again, overall this is a very enjoyable film that more people should check out.

Finally, I’ve got to talk about an Israeli film called Big Bad Wolves by Aharon Keshales and Navot Papushado. My buddy Rickey passed me a copy of this movie a few years back and I’d been too scared to watch it. See, it’s about a father who captures the man he thinks killed his daughter. He then goes about torturing him in the basement to find out where her head is buried.

So, yeah, it’s intense. But it’s also raw and there are some really funny parts, which feels weird to say. The movie kind of plays tricks with you as you watch because you’re not really sure who to root for. There’s a question as to whether the father has the right guy and his captive expertly acts his way through these scenes to the point where you’re constantly changing what you think about him. I’d say I want to rewatch this one again soon, but am not sure if I ever will. There’s only so much a guy can take.