Good golly, I watched a lot of horror movies this season. I actually kicked things off pretty early, sometime in September and pretty much watched only scare fare since then with the exception of many, many episodes of Daniel Tiger, the shows my wife and I watch and a few kids movies sprinkled in.

I found myself missing Topless Robot quite a bit this fall as that site offered the best place for me to knock out crazy lists about some of the longest running horror franchises around. I wound up not writing anything about new horror for pay, so I’m going to go through as many of the newer films as I can in this series of posts. Let’s start off with one of my favorite subgenres, the slasher movie! I watched four that I thought each did something fun an interesting.

Like many of the newer films I watch on Netflix or Prime, I heard about Hush on the Shock Waves podcast (which used to be Killer POV). This one’s by Mike Flanagan who continues to impress. Absentia really wormed its way into my brain and still pops up a few times a week, now that I think about it. I also really enjoyed Oculus, so Hush jumped pretty high onto the must-watch list as soon as I saw it was on Netflix.

This one’s about an author named Maddie (Kate Siegel) living in a remote house who can neither hear nor make any vocal sounds herself. So, when a masked killer (John Gallagher Jr.) appears on her property, you can imagine that offers more than the usual number of problems. This movie reminded me of The Strangers and You’re Next, but with these amazing ways of putting the viewer in Maddie’s place by playing with the sound design. An added bonus of these methods is that you pretty much HAVE to watch the movie and put your phone down to follow the action.

Hush also goes a long way to get into the brain of a writer. Maddie has these moments where she’s trying to figure out what to do as she’s trapped, injured and being hunted and we see how she imagines those choices playing out. They’re far from pleasant, but definitely ring true to anyone with an over-active imagination who fancies themselves a storyteller in the making.

Another new slasher I heard about on Shock Waves came from writer-director Mark Pavia and is called Fender Bender. This movie marks the amazing Scream Factory’s first foray into actually producing their own films and offered plenty to enjoy.

I love the concept of this movie which revolves around a guy (Bill Sage) getting into the title car accident with random people, getting their insurance information and then showing up at their house to kill them. We see the end of this ritual in the beginning of the film and then he literally rolls out to find his next victim. This time around it’s 17-year-old Hilary (Makenzie Vega) who gets left home from the family trip because of the same accident. From there, it’s a matter of who will survive as her friends come over to cheer her up, but wind up offering the killer more people to knock off.

Fender Bender‘s not the best movie in the world — some of the actors come off as stiff or awkward at times — but I’m always down for a new slasher that takes itself seriously and offers up motives or scenes that I’ve never seen, which this movie definitely does. 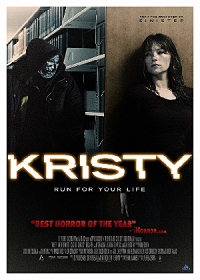 Up next we’ve got Kristy, directed by Oliver Blackburn. This one’s also on Netflix and apparently first debuted on Lifetime! In the film, a young woman named Justine (Haley Bennett) stays at her university during the Thanksgiving break, mostly alone. After a strange trip to a nearby convenience store, she finds herself hunted by a group of masked people who continually refer to her as Kristy. She eventually discovers that they’re part of a cybercult network of murderers who target women they refer to as Kristy.

Like many of the newer horror films I find myself liking, this one gets into why Justine does such a good job of keeping herself from getting killed, though not in such an on the nose way as, say, You’re Next. She’s fit and smart and knows the territory of her school while her attackers might be working more on the fly. I appreciate how she uses that knowledge to take them out. It made me think about how I might have handled a similar situation at my college, but I’m not sure how useful my couch or the English building would be in keeping me alive!

Not long ago, I talked about how hard I fell for Last Shift, so when Anthony DiBlasi’s Most Likely To Die popped up on the Flix, I just had to watch it. Of these films, this one felt like the biggest throwback to the slashers of the 80s and I have no problem with that at all. In this case, a group of friends get together before their high school reunion. This particular group shares a bit of a dark secret as they were all involved in labeling a classmate nicknamed John Doe as Most Likely To Die in the yearbook. It seems as though someone remembered that transgression as the group finds itself shrinking at the hands of a masked cap-and-gown wearing killer.

This one boasts a cast that includes Perez Hilton, Jake Busey and former Glee star Heather Morris, all of whom do a solid job of bringing their characters to life, though sometimes in the over-the-top fashion that this kind of film requires. I was also surprised and impressed by some of the kills which were much gorier than I would have thought.

All-in-all, I’ve got to say that it’s a pretty great time to be a slasher fan right now. The genre might not be topping the box office like it did in the 80s (or even appearing, now that I think about it), but that means we’re not getting over-saturated with junk. Instead, these are films by unique creative voices who wanted to make them instead of stab-fests being churned out for  quick buck. Oh, plus, each of the killers in these films had AWESOME looking killers which is always impressive!