It’s been way too long since I wrote about comics here on the site, so let’s jump back in. Between library borrows, my existing To-Read boxes (roughly two long boxes at current count) and the recent discovery of a store that sells super cheap trades, I’ve got a lot to read. Let’s get into it!

As alluded to above, I found a place called Ollie’s some what nearby that’s not unlike a Big Lots or the dearly departed New England stalwart Building 19, that also has a huge shelf of trades! One of my first finds happened to be both volumes of the Brenden Fletcher-penned Black Canary series that ran from 2015-2016. I’m a big fan  of this character going back a long ways, but this, of course, takes place in the New 52 Universe, so none of that old stuff matters! 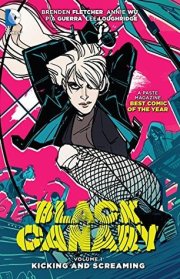 That’s okay, though, because this new take on Dinah is pretty rad! She started off as a government agent working for Amanda Waller, played super hero for a while and then decided to lay low by becoming the lead singer in an all-female band called Black Canary that started out in Gotham! In the first volume, Kicking And Screaming (which collects the first seven issue plus DC Sneak Peek: Black Canary #1), it becomes clear that, BC shows aren’t just rough and tumble, but also attended by strange shadowy creatures!

As it progresses, the book features Dinah’s ex-husband, a former singer turned villain, mysterious ninjas and some of the craziest band battles of all time! We also learn about Ditto, the band’s diminutive killer guitar player who doesn’t speak! The second book, New Killer Star (collects BC #8-12, Gotham Academy #17 and Batgirl And The Birds of Prey: Rebirth #1), shifts much of the focus back to Dinah and her wildly complicated, but also super interesting family problems. We also get more mystery ninjas, secret martial arts schools, appearances by Vixen and Batgirl and a return of Black Canary (the band) at the end!

I loved this series pretty hard, you guys! I’m a huge sucker for anything that combines bands and heroes, going back to The Impossibles and Scott Pilgrim. The way the women in this band support each other is just fantastic, plus the action is killer. I would absolutely love it if they turned this into a film, it might actually get me to go see a DC movie in the theaters!

And the art is perfect for this series! I was a little concerned when I saw that something like five different artists came on to get it done. However, Annie Wu, Pia Guerra, Sandy Jarrell, Moritat and Wayne Faucher not only managed to bring their own styles to the table, but also managed to fit in together so that the changes were never jarring between issues. You can feel the punches, kicks and sonic screams as the issues progress, but they also manage to make the music scenes hum with energy. That’s a tough thing to capture in any medium, but especially a silent one like comics! Kudos to everyone all around for weaving this complex story that I’m excited to return to down the line. 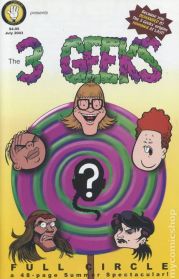 Alright, so 3 Geeks: Full Circle isn’t a trade, but I want to write about it anyway, so away we go! Not long ago, I needed to order some books from MyComicShop for work and decided to throw a few fun things in there for myself, including this issue that recaps the origins of the title characters, otherwise known as Allen, Keith and Jim!

If you’re curious about my personal history with this series, which began while I meandered down an artist alley in Ohio way back when, check out this link! Basically, the comic features three buddies who love comics. Allen’s super intense and talks like Thor, Jim’s a super-intense Punisher fan and Keith’s just a regular, somewhat socially awkward young man.

This issue features the gang going to a show where a stand-in for the guy who started Mile High Comics (this world is filled with almost-but-not-quite nods to real deal titles and creators) inadvertently leads to the reveal that all three of them not only share a past they didn’t know about, but an actual comic that passed between all of them! I’m not always a fan of “we’re all connected” stories like this, but I had a lot of fun with this one!

Finally, I was going through my copy of the Vertigo encyclopedia in preparation for reading nothing but comics from that imprint during the high Halloween holiday and stumbled upon 7 Against Chaos by Harlan Ellison and Paul Chadwick. Ellison’s a super-celebrated author whose work I’m not overly familiar with. I’m sure I’ve seen his Twilight Zone episodes during one of my many New Year’s Syfy marathons and I’ve definitely peeped his Tales From The Darkside episode starring Kareem Abdul-Jabbar and his I, Robot screenplay. And, of course, Chadwick’s a legend whose Concrete is one of the more interesting creator-owned comics around.

Anyway, 7 Against Chaos is a classic sci-fi story set in the far future. Humanity has expanded to all of the planets. Beings have been modified and computers have started building computers so smart that humans can’t even figure them out! More importantly, time seems to be falling apart, so one man puts together a team suggested by one of those super, super smart PCs to save everything.

Structurally speaking, the story fits well inside the usual conventions. We see the team put together, we learn about the problem and then we see the execution of the plan. Of course, this being Ellison, you get so much more than just those beats. You get to find out more about these characters, see how they interact with one another and also learn a pretty fascinating reason for the bad guy to do what he’s doing. Chadwick, a legend in his own right, facilitates all of these moments — not to mention all sorts of tech and different beings — so perfectly that the whole things feels like a totally realized vision from two creators.