Alright gang, I know it’s almost February of 2020, but I still have a Best of 2019 post or two I want to get out before moving on! I’ve already covered old and new horror films, but I saw a lot of other flicks this year that I at least want to say a few words about. So, I’m going to do exactly that and run down a whole slew of movies and just say a few sentences about what I dug! LET’S. GET. INTO IT!

One of the first movies I watched this year was a Nic Cage joint called Army of One directed by Larry Charles. In this based-on-a-true-story film, Cage plays a guy who decides he’s going to take out Osama Bin Laden by himself! It’s not as bananas as I prefer, but it was a fun flick with a nice role for Paul Scheer!

I also had a great time with Shane Black’s The Predator! It definitely wasn’t what I was expecting and I’ve heard co-writer Fred Dekker talk about a few major scenes that were filmed, but cut. I’d love to see THAT movie, but am happy with the one we have which includes one of my all-time favorite subgenres: kids dealing with crazy situations.

When I started seeing previews for Drew Pearce’s Hotel Artemis, I figured I’d like it and I did! It’s kind of like a movie set solely in the hotel seen in the John Wick movies, but it’s really a hospital. In other words, it’s filled with criminals and there are rules, but will they be followed? Jodie Foster, Sterling K. Brown, Dave Bautistta, Jeff Goldblum, Charlie Day and the rest will know…if they survive!

Switching back to big budget films, I was also a big fan of J.A. Bayona’s Jurassic World: Fallen Kingdom starring the previous installments Chris Pratt and Bryce Dallas Howard. I like when sequels like this take big swings and build on top of the original without fully copying it and that’s exactly what you get in a movie where dinosaurs eat rich jerks in a mansion!

This one’s not from the past few years, but I finally went back and watched Edgar Wright’s The World’s End with pals Simon Pegg and Nick Frost. Like all of Wright’s movies, it’s incredibly well crafted with a story I want to revisit a bunch, but also included all kinds of emotional friend stuff that hit home!

Quentin Tarantino’s Once Upon A Time…In Hollywood is my favorite film of the year (and many other years, actually), but before I saw that, I watched Drew Goddard’s Bad Times At The El Royale hit a few of the same notes, while playing a very different song (actually, so did Mandy to some extent). The movie features a lot of characters played by the likes of Jeff Bridges, Dakota Johnson and Jon Hamm who all happen to wind up at the title location and the bloody things that happen there.

You absolutely, one hundred percent need to watch Sandi Tan’s documentary Shirkers. In it, she recounts making an indie movie as a teen in Singapore with an older dude who was, first, her mentor, and then her tormentor when he ran off with all of the footage! You get all the struggles that go into a mounting a project like that, but then this whole added layer that lasted for years until a new development took place that blew my mind! WATCH. IT. NOW. IT’S. ON. NETFLIX. 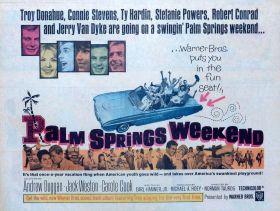 This one’s the oldest of the bunch, but I really enjoyed catching Norman Taurog’s 1963 offering Palm Springs Weekend! In it, a bunch of college kids wind up at the title vacation spot and all sorts of wackiness ensues thanks to the cast that includes Jerry Van Dyke, Connie Stevens, Troy Donahue, Ty Hardin, Stefanie Powers and Bill Mumy. Think more Bikini Beach than Spring Break and you’re in the right headspace.

Okay, that’s it for right now. I’ve got a bunch more that I’ll post tomorrow!