I can’t really understate how important Wizard magazine was to me during my formative comic-buying years in the 90s. I’d already become a die-hard DC fan before I discovered the magazine, but it became this window into a much larger comic landscape of companies ranging from Marvel and Dark Horse to those guys doing crazy things at Image (though this was admittedly a year or two after the initial boom). I still remember how much they hyped certain books, though, and The Darkness from Top Cow is one such example! I recently borrowed the first and second volumes of the Darkness Origins trades from Hoopla and had a fun time with them!

Marc Silvestri’s early Image books like Cyberforce and Codename: Stryke Force were before I really got into comics, but I was tuned in when Witchblade and later The Darkness landed. The former seemed to get lumped in with the Bad Girl books of that era, but the latter was a bit more interesting to me because it seemed to lean further into horror and also featured Garth Ennis as a writer. Now, it would be YEARS before I finally read Preacher (one of my all-time favorite comics) or Demon, but this might have been where I began to hear about his wild, out-there comics. 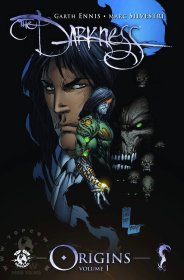 If you’re unfamiliar, Jackie Estacado is a Manhattan-based hitman working for his mafioso uncle who, on his 21st birthday, became the latest in a long line of beings bonded to a force called The Darkness. Whenever there’s a lack of light, Jackie can summon a kind of armor as well as various weapons and an army of demonic creatures who do his bidding. It’s kind of like Clive Barker having a Green Lantern ring.

In the first volume (The Darkness #1-6), which is gorgeously drawn by Silvestri, Ennis weaves a story wherein Jackie has to refigure his carousing lifestyle because having sex will cause his own death and pass on the Darkness to his heir. Beyond that, he finds himself stuck between a group of monks who want to train him in their ways and the Angeuls, who wants to kill him because he’s, well, pretty evil.

With the second Origins (Darkness #7-10 and Witchblade #18-19) volume, things get a little odd. First off, though Ennis’ name appears on the cover of the trade, he does not seem to be involved in the actual issues which find Jackie and his darklings (think 90s Gremlins) running around, doing jobs and running into Sara Pezzini, the Witchblade! The art also slides as Darkness #7 becomes a group effort before you witness the glorious Michael Turner Witchblade issues and then Silvestri’s too-brief return. The first book feels like a coherent story while the second just looses cohesion, bringing in all of these Withcblade elements that just don’t make sense if you’ve only been reading Darkness.

At the end of the day, these comics feel like what 80s and 90s action flicks would have been if they had an unlimited budget. They have all of the flash of something like The Big Hit and gorgeous visuals with all sorts of mob stuff thrown in. I guess that’s what Image was early on and you really feel that when Ennis isn’t around or maybe I’m just biased. For what it’s worth, I covered Top Cow for Wizard when I worked there and did the same for CBR when I went freelance. I came to really enjoy Ron Marz’s run on Witchblade and Jackie’s inclusion in that book as well as the Artifacts books. I’m left wanting more of Ennis’ run on The Darkness, which is collected in the third Origins book, but that particular volume is not currently on Hoopla. I’m also definitely interested in checking out later runs because there’s plenty of greatness in the concept to explore.