I’ll admit, I was getting a little burned out on these Halloween Scene double features. I usually like to go to the coffee shop to get some of my work done which takes away from potential movie watching time. Plus, as much as I love horror movies, watching nothing but them can be a bit much. I have no idea how BC over at Horror Movie A Day does it. You might have noticed (if anyone’s paying attention) that I didn’t do a Halloween Scene on Friday. That’s because the missus got off work early, I wanted to work on my own horror script (it’s getting closer and awesomer, if I say so myself) and my folks were coming to visit, which limited my time. I thought about dumping the whole idea and just watching movies I love, but then I got Phantasm II in the mail from Netflix and decided to continue on.

As I mentioned last week, I’m doing these reviews completely out of order, having reviewed the third and fourth Phantasm movies before the first two. I’ve seen all the movies before and I think I can say that it almost doesn’t matter which order you watch them as long as you’ve seen them before because they’re all just so gonzo. The first Phantasm sets up a lot of the mythology of the series. You’ve got young Mike witnessing some weirdness involving the mortician at Morningside Cemetery. Soon Mike’s trying to convince his older brother Jody that monsters are out and about doing something to the corpses in town (including their friend who just died and their parents who died two years prior). They’re joined by Jody’s friend, fellow guitar player and ice cream man Reggie who joins in on the action. Our trio of heroes finds themselves facing off against mutant flies, Jawa-like monsters and the iconic metal balls. Meanwhile, the Tall Man seems to be stealing bodies, shrinking them down and sending them off to his home world/dimension.

Now to talk about the ending, so ignore if you don’t want to kind of sort of know what happened. After seemingly succeeding in burying the Tall Man in a deep hole, we’re told that it was all a dream. Jody died in a car accident, Reggie’s watching over Mike and Reggie thinks Mike’s story was just a dream or delusion. Usually I hate endings like this because it basically means you wasted the last hour and a half of your life on something that mattered even less than a movie already does. For whatever reason, though, it doesn’t bother me quite as much with Phantasm. Maybe it’s because the Tall Man appears and Mike gets sucked through the mirror so it seems like some aspect of the movie must have been true? Maybe the Tall Man somehow made Reggie and everyone else forget the events of the movie somehow. There’s a lot to think about with the movie if you don’t mind putting way too much thought into a movie.

Oh, one last thing, I love the music in the movie. It seems to take some cues from John Carpenter’s Halloween score which came out the year before in 1978. Here’s the thing though, the movie took a few years to make, which means the score might have been conceived before Carpenter’s or it might have been created afterwards, it’s hard to tell. I listened to the director’s commentary for the movie years ago. It’s really interesting with lots of fun facts and details (they filmed the movie over a series of weekends spanning a year or two), but I don’t remember writer/director Don Coscarelli talking about it specifically. Then again my memory’s not so great (I completely forgot that Jody and Reggie’s friend dying kicked the movie off). 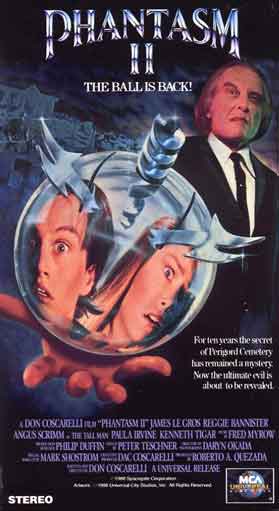 It’s not often that a horror movie sits around for nearly a decade before getting a sequel. Coscarelli was apparently offered the chance to do one immediately after finishing the first movie, but instead went on to do Beastmaster. He eventually got a deal with Universal to create this sequel which recast the role of Mike, kept Reggie the same and didn’t include Jody at all. Of course, the Tall Man returned played by Angus Scrimm. The larger budget allowed Coscarelli to really open the story up. We kick off kind of where the previous movie ending and then moving into the present where a grown-up Mike is getting out of the loony bin after seven years. He immediately goes after the Tall Man, digging up graves and finding out that they’re actually empty. Reggie stops Mike and takes him to his house which inexplicably blows up killing Reggie’s family. This makes him believe Mike, leads to them breaking into a hardware store where Reggie makes a four barreled shot gun and Mike a flamethrower and drives the two to go on a road trip to track down and kill the Tall Man. There’s also some girls involved and a new group of monsters for Mike and Reggie to fight like a gas masked killer who Reggie has a chainsaw battle with. It’s pretty amazing.

The added budget also lead to more special effects like the Tall Man’s visage popping out of a girl’s back Freddy-style and a golden flying ball that can bust through walls and shoot lazers. It’s pretty epic. In fact, the whole flick is. I especially like that whole towns have been murdered, as Reggie says, by the Tall Man and his monstrous minions and yet no one seems to notice. This is either sloppy storytelling or hints at the Tall Man’s greater powers that haven’t been directly explained. I’m going to go with the latter because I can’t help but liking the series, especially as Reggie takes center stage this time around and becomes an Ash-level badass (I think I might actually like him better than Ash, at least in this flick).

So, there you have it. I’m glad I found two movies I hadn’t reviewed that I really like. I’m going to search through the blog archives to see what I have and haven’t reviewed and hopefully fit in some of my favorites (Jaws and the original TCM have yet to be reviewed, plus I’ve got a few Roger Corman and Vincent Price movies I haven’t watched as of yet, but I do have to find time to watch at least Halloween and Halloween III). Things are looking up!