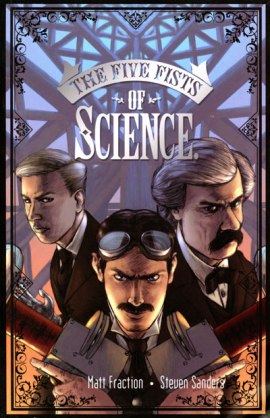 A few weeks back, when writing about a trio of Marvel minis from the mid 2000s, I mentioned an intended shelf cleaning project before moving. I pulled a series of trades out of my collection to re-read and see if they continue to earn shelf space. Here’s two more of those reviews.

I scored this copy of Matt Fraction and Steven Sanders’ Image Comics OGN The Five Fists Of Science back in my early Wizard days. If there was a free trade sitting around, I was likely to grab it and give it a read, especially if it had a strange or interesting concept. And this book definitely fits the bill.

Five Fists revolves around Mark Twain teaming up with his good friend Nikola Tesla and his one-handed assistant Timothy Boone to create a giant, robotic war machine that can be sold to every nation on Earth to ensure peace (the ol’ mutually assured destruction concept). They join forces with Baroness Bertha Von Suttner who introduces them to all the right people. Meanwhile, a group including J.P. Morgan, Thomas Edison and Guglielmo Marconi are erecting a building to help bring demons into our realm. See what I meant when I said “strange” and “interesting?”

The book features a nice mix of historical characters, many of them who were quite eccentric even when not dealing with demons and robots, with made-up ones to tell the kind of story you’re just not going to get anywhere else. Though, for what it’s worth, I do think this would make a ridiculously fun movie int he vein of the Sherlock Holmes films. Anyway, Fraction did a great job of make this story fun, exciting, strange and adventurous, which gets the thumbs up in my book. My only complaint is that Sanders’ art comes through a bit muddy. I’m not sure if this was a printing, inking or coloring problem, but there were a few pages here and there that were difficult to parse. It’s possible this has been change in the new printing (linked above), but I don’t know for sure as I have the one from 2006. All in all though, I had a great time revisiting this book and will be keeping it in the collection. If you’re looking for something to pass to a friend who’s into science, this is definitely on the list of passable materials.

Another Wizard acquisition, Billy The Kid’s Old Timey Oddities comes from Goon creator Eric Powell and artist Kyle Hotz. I believe this was the first book written by Powell that I actually read as it wound up taking me years to get around to The Goon: Fancy Pants Edition Volume 1.

This book finds a freak show owner approaching Billy the Kid, who’s supposed to be dead, and offering him a job accompanying some of his performers on a mission to Europe to recover a Gollum’s heart. Said performers include the Alligator Man, the Tattooed Woman, the Wolf Boy, Watta the Wild Man and the Miniature Boy. As it turns out, the artifact is currently in the possession of another character thought long-dead: Dr. Frankenstein, who has gotten even crazier in his experiments.

One of the most impressive elements of a book like this is how Powell sucked me into the story and got me to like these characters so quickly. I mean, you’re dealing with just four issues and yet, every time someone had a nice moment I smiled and every time someone wound up on the wrong side of a monster, I felt bad. That’s just darn good yarn-weaving, right there.

Hotz deserves a lot of the credit for that as well. He does an amazing job of conveying emotion, terror, humor and action all while rendering these fantastical and monstrous looking characters. To my mind, he’s got a Kelley Jones vibe (who I love), but with his own unique, sometimes grotesque style. He and Powell not only made a fun comic I’ll be holding onto, but also two more volumes I want to check out.