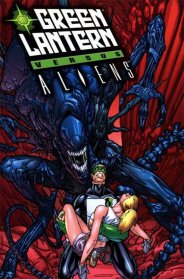 Kyle Rayner was MY Green Lantern for the longest time. I came to the ongoing series when Hal Jordan went nuts and an LA dude got the most powerful weapon in the cosmos dropped in his palm in a back alley while wearing a Nine Inch Nails T-shirt. I was on board instantly and have loved that character ever since. So, when I was perusing the library’s Green Lantern offerings and saw they had a copy of the DC/Dark Horse Green Lanterns Versus Aliens crossover, it was the easiest of requests to make.

Written by Ron Marz and drawn by Rick Leonardi, this four issue series from 2001 posited a universe in which Hal Jordan and some GLs found an infestation of the xenomorphs and, instead of killing them, dropped them on Mogo for safe keeping. That all worked fine until Hal destroyed the Green Lantern Corps and a spaceship crashed on Mogo in the present. A group of ex-GLs including Salaak, Ash, Brik, Tomar-Dar and M’Hdahna pop up at Kyle’s place to tell him of the problem and off they go to Mogo! Once there, they meet the only survivor, Crowe, and start getting picked off and taken by the doubled mouthed monsters.

Crossovers like this can be tricky, but Marz utilizes the framework of an Alien story and brings in plenty of great Green Lantern elements to make it something fun and unique. There’s even a twist towards the end that had me slapping my head (but then again, I’m far from an expert when it comes to this film franchise).

While reading, I realized the beauty of crossing over with Aliens: they’re not a character, they’re a set of scary elements that can be melded into just about any kind of story around. Aliens work just as well when played off of Ripley as they do Kyle Rayner or a medieval knight or even a Predator (well, maybe not JUST as well, but they could be!).

I highly recommend giving this book a read if you can get your hands on it. It’s a fun space story, that puts Kyle through the ringer back when he was still in his “trying to prove himself” phase. Just don’t get too wrapped up in the continuity because it doesn’t fit in with what Geof Johns eventually did post-Rebirth.