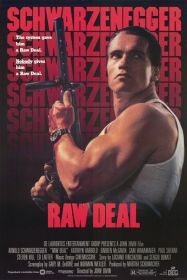 By now it seems pretty obvious that I’m a big fan of Arnold Schwarzenegger’s movies. They might not be the most advanced films in the world, but every now and then you want to watch a big guy blast through a bunch of bad guys who (probably) deserve it.

I was excited to see Raw Deal pop up on El Rey’s On Demand section because it comes after both Conan movies, Red Sonja, Terminator and Commando but right before classics like Predator and The Running Man and yet I’d never seen it.

In this one, directed by John Irvin (Ghost Story), Arnold plays a disgraced FBI agent who winds up going undercover for a friend still in the Bureau whose son got killed by some mobsters. Arnie fakes his own death, takes on a new identity and infiltrates said mob where he soon runs afoul of Robert Davi who doesn’t trust him. Frank from Murphy Brown and the dad from A Christmas Story also star, which is fun, even though it took me a while to figure out why I remembered them.

It would be a lie if I said this was a lost Schwarzenegger classic that ranks up there with some of my 80s favorites, but I am glad I watched it. It revolves around Arnie wearing nicely tailored suits, getting into fights and eventually going all action hero on a bunch of mobsters which is not business I’m used to seeing him take care of.

And yet, it does have a weird charm that puts it higher than some of the usual 80s action movies. His drunken wife throws a whole cake at him early in the film because she misses living in the city. Adding to the surreal nature of the scene, Arnold is dressed exactly like the Bounty paper towel guy. She’s never seen again after he fakes his death, though he eventually says they’re back together and expecting. Speaking of Arnold and the ladies, he actually gets so drunk with a mob lady that he passes out before they can consummate the date. I just realized this might have been so he could eventually get back with his wife without the audience hating him. Oh, also, instead of the ubiquitous strip club scene, Raw Deal has one set in a drag club which isn’t handled like a joke.

So, yeah, Raw Deal is definitely worth a watch thanks to it’s bonkers mix of mayhem and slightly off kilter scenes and characters.