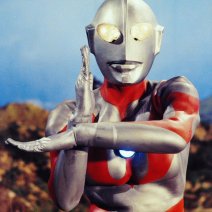 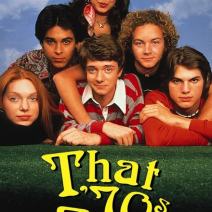 This week I find myself captivated by a Japanese genre from the 60s, a sitcom set in the 70s and a podcast that spans all decades to bring listeners a variety of must-see films. That’s right, this week I’m obsessed with tokusatsu, That 70s Show and the Pure Cinema Podcast!

As I mentioned after reading Ready Player One, I found myself entranced by the idea of tokusatsu, a live action genre from Japan that features lots of practical effects. The idea of Ultraman — an alien who gives a human the ability to grow to immense size and fight giant monsters, but only for a short time — captured my imagination and I immediately request the original series in DVD form from my library system.

While waiting for those to arrive, I started watching the mislabeled Super Riders on Amazon Prime. In just a few days, the title has already disappeared from the streaming service, but I saw about a half hour of it before falling asleep. It’s actually a German production called Roboter der Sterne that took scenes from the Japanese series Super Robot Mach Baron and turned them into a film.

This explains not only why everyone in the dub sounds likea WWII-era  bad guy but also crazy story transitions that move from a giant robot fighting a menace to a human taking on guys dressed like football players (the Raiders, really) who kick exploding pigskins at their enemy. Super Robot Mach Baron is the follow-up to a show called Super Robot Red Baron. There’s a DVD set of the latter, which I’ve already ordered and plan on making my way through in the near future.

I’m also on to the second disc of the Ultraman series from the library and have fallen hard. Regular readers will know that I’ve got a great affinity for practical effects and shows or movies that don’t let budget limitations get in the way of putting out a fun adventure. This show is filled with miniature planes flying around, guys in monster suits and miniature cities getting destroyed by electricity-spewing creatures. As a kid, I loved the bits and pieces of Godzilla movies I saw on cable, but got bored when the action shifted to scientists talking about what to do about the monsters. With Ultraman, and hopefully other tokusatsu shows, you get less of the latter and much more of the former! 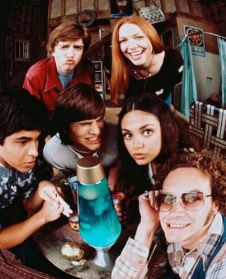 When not watching aliens beat up on huge monsters, I’m usually relaxing with one of my all-time favorite sitcoms That 70s Show. I’ve been a fan since this series debuted in 1998. I lost track here and there, but between syndication and buying all of the seasons except that last one on DVD, I’ve seen all of the episodes a handful of times.

Recently, IFC started showing them in huge blocks at night. After reading to one of the kids and then hanging out upstairs to make sure Lu’s asleep, I usually head down to the living room and wind up watching an episode or three. I love the dynamics between this group of friends that sort of reminds me of the friends I made in grade and high school. They’re so close knit and honest, that I feel like it set me up well for dealing with my own teen years and, looking back as an adult, still rings true. I don’t think I’ll ever get tired of Hyde’s tempered rebellious nature of Kelso’s dumbness and am super glad it’s back on TV in an easy to digest way (because, apparently, pulling the DVDs off of my own shelf is too much work). Basically, there’s a nice comfort level with this cast and the places they inhabit, the kind of thing that really only comes from long-running shows with solid directions and casts (again, except for the last season).

And finally, I have to give praise to a semi-new podcast called Pure Cinema on the Now Playing Network. I came to hear about this show because one of the hosts, Elric Kane, is a co-host on the fantastic Shock Waves horror podcast (which used to be Killer POV) and the other, Brian Saur is a person who I’m a fan of based on his Twitter account and movie blog.

Each week, these two ridiculously well-versed film fans get together and talk about movies in fun and unique ways. There have been nine episodes so far ranging in topics from favorite deep cut sci-fi invasion movies and revenge films plus favorite HItchcock films with an accompanying double feature and rip-offs. The most recent episode focused on pairing up a neo-noir film with a classic one.

This is the kind of show that I should listen to with a notebook and pen because I’ve heard of maybe half of the films they bring up and have seen maybe four total. Luckily, Saur keeps pretty good records of the films they discus on his blog, like this post running down their favorite rip-off films. If you’re interested in listening to two people with tons of cinema knowledge get into all kinds of genres without getting pretentious or precious, then this is the show for you!