I’m liking this Trade Pile format I got some mileage out of last week with not one, but two posts. In an effort to post more here on the blog and also get my thoughts down on the stacks of trade paperbacks and graphic novels I’m reading, I’m going to keep it going. Plus, I like that header image. So, if you want to find out what I thought about Alex Robinson’s Tricked, Goldie Vance Volume 1, the third volume of Rai and the amazing Daytripper, read on! 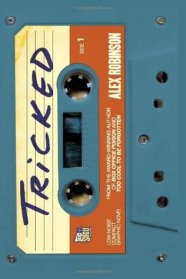 I just love Alex Robinson’s comics. As I mentioned when I wrote about BOP, I finally read and loved Box Office Poison when I got to Wizard and went on to also really enjoy Too Cool To Be Forgotten. As far as I’m concerned, between his intricately woven plots and comic strip-rooted-in-realty art style (that also gets into some impressive and exciting layouts from time to time), Robinson’s work is in the “just buy it” department.

That’s what I did a few years back when Top Shelf had a sale. I mean, even if I didn’t know who Robinson was, I’d probably buy a book made to look like a cassette tape. Anyway, Tricked follows a group of people ranging from a mostly washed up 90s rocker and his assistant-turned-love interest to a waitress and her bosses to an uber music geek who’s slowly losing his mind.

Without spoiling everything, these disparate pieces wind up coming together, but well before that, each one hooked me with interesting characters of all kinds making bad decisions and occasional good ones as they stumble through life. I wanted to read this all in one sitting, but needed to, which I recommend. 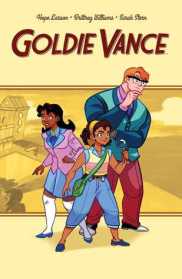 Last year, I interviewed Hope Larson and Brittney Williams about their BOOM! Studios all-ages mystery comic Goldie Vance and was instantly curious. Our title character’s a teenage girl solving mysteries revolving around the hotel her dad manages and they both live in.  Plus, there’s a kind of cool retro vibe that reminded me of a more rounded version of the DC Animated Universe of 90s Batman and Superman cartoons.

The first volume starts with Goldie winning a car race with a hotel guest’s car to help a friend out, but that’s not even her main case. That would revolve around finding a jewel necklace for a man who winds up getting kidnapped himself. In classic noir fashion, the small case leads to something much, much larger that’s a lot of fun.

Larson and Williams work perfectly off of one another in this book which looks, feels and sounds familiar, but also very much of itself. I’m all for the more fantasy or sci-fi genre books aimed at kids these days, but I’m also glad there’s a cool girl like Goldie doing the kinds of things Nancy Drew only dreamed of! I like it so much that I’m going to run the book by my six-year-old and see if she’s interested in jumping on board with me. 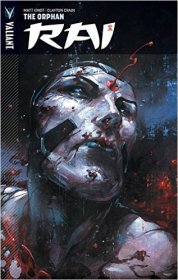 For some reason it took the library months to send me the third volume of Rai after I voraciously made my way through the first two. My enjoyment of The Orphan, which collects #9-12, would have definitely gone up had I read it close to the others, because in the meantime, I’d forgotten who some of the characters were and exactly what was going on.

After catching myself up, though I was back on board for this book which spits time between the people still on New Japan and Rai on Earth who’s trying to find people to help him fight Father. In a lot of ways, this arc acts as a bridge between the first two books and the upcoming action that will take place in this series’ fourth volume as well as the 4001 AD series, neither of which are currently in my library system which means I’ll probably have to shell out some scratch for the next installment in Matt Kindt and Clayton Crain’s enthralling, sci-fi epic. 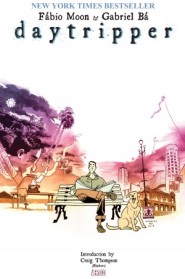 Finally, I read a book I’ve been saving for years: Fabia Moon and Gabriel Ba’s Daytripper from DC/Vertigo. I remember reading the first installment of this 10 issue series back when I was at Wizard and was blown away by its beauty, grace and honesty. But I didn’t really get HOW good it was until the next issue.

Here’s the deal, Daytripper‘s about a guy named Bras who lives in Brazil and each issue features his death. It’s not an Aeon Flux kind of thing though, but instead a look at what his life would be like at these different stages if he died instead of moving on to the next one.

I actually read all ten issues in one sitting and just felt emotionally exhausted, but also fulfilled when I finished. Without getting into too much detail, the ultimate message that I took away from this book is to seize the damn day because, as we all know, you have no idea how many more you have. It also made me so happy to be involved in this comics world which can just as easily show men and woman moving mountains as it can a guy trying to figure out how to write a series of obits after a major disaster. A lot of people don’t know that comics can do both, but I hope that this little blog tips at least a few off to that.