Alright, so going through the top half of this pile was pretty fun on the previous post. I had a great time with Lumberjanes/Gotham Academy, Batman ’66 Meets The Man From U.N.C.L.E. AND the first volume of Mockingbird so there’s no reason to expect I didn’t also enjoy the bottom half (mostly because I tend to follow the old “if you don’t have anything nice to say” adage). Want to hear about Shutter, Aquaman, Batman: Dark Knight, Dark City and the first volume of Gerard Way’s Doom Patrol? Then you know what to do!

I’ve known Joe Keatinge almost as long as I’ve been involved in the comics industry professionally. When I started at Wizard, he was the PR contact at Image and later on when I covered Image for CBR, he shifted gears and became a writer. As someone who would love to shift from writing about comics to writing them myself, I consider him something of a hero. It also helps that he tends to create comics I dig like Glory and Hell Yeah.

In Shutter, which he developed with artist Leila Del Duca, we meet a young woman named Kate Kristopher who lives in a world where sentient cat clocks, anthropomorphic lion gangsters and trips to the moon seem relatively routine. She and her dad used to be adventurers, but she basically gave that up after he died. Now she’s dealing with not just a series of hit-sentients trying to kill her, but also a growing group of siblings she previously didn’t even know about.

Wanderlost is just the first volume of Shutter, but I’m already fully sold on this world that feels like it came from somewhere between Brian K. Vaughan and Alan Moore beautifully, powerfully and dynamically brought to life by Del Duca. So, it’s got a great world to run around in, but also a character in Kate who’s just trying to figure out who she is and how she fits into the larger scheme of things. Plus, you’ve got plenty of intriguing mysteries to keep me coming back for more, which is good because the series lasted 30 issues! 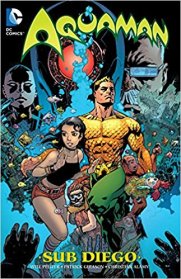 Moving on, I finally re-read Will Pfeifer’s brief stint on Aquaman as collected in the Sub Diego trade. I’ve mentioned before that Peter David’s run on that book was really important to me growing up, but I just could not get into the next volume which featured the water hand. Pfeifer must have hopped on the series around the time of my Wizard internship (or possibly after I got hired on full time) because I remember a lot of the editors loved his work and convinced me to give it a try. HERO blew me away, so it didn’t really take much.

In this arc, drawn by the amazing Patrick Gleason, our hero has to deal with a major crisis as San Diego falls into the ocean after a massive earthquake. Making matters far more complicated, it turns out that some people not only survived the quake, but also developed the ability to breath underwater. This run — #15-22 to be specific — does a nice job of flipping the script on Arthur while also keeping him in somewhat familiar surroundings. Instead of acting as king, he’s just trying to figure out how to acclimate people to a completely different way of life while also fighting off less savory elements.

I don’t know why, but Pfeifer’s run ended with #22 even though John Ostrander continued the story along with Gleason, who is, in my humble opinion, one of the best artists in the business. There are a few more trades which I hope to get my hands on in the near future.

From Sub Diego to Gotham, I gave Batman: Dark Knight, Dark City a read. This one combines to runs written by Peter Milligan, the first originally ran in Batman #452-454 and the second in Detective Comics #629-633. I remembered reading some of them previously in one of those great, but clunkily named 100-Page Spectaculars from about six years ago (yeesh), but it had been long enough that I enjoyed them more the second time around, especially the art by Jim Aparo, Kieron Dwyer and Tom Mandrake, plus those Mike Mignola covers.

Back then, I’d been consistently reading Bat books for almost 20 years and was probably feeling more burned out on the character and his conventions than I am now. These days, I’m just happy to check out any collection like this that focuses on one of my all-time favorite heroes from an era I’m not as familiar with.

Finally, after looking and looking and looking, I finally saw Doom Patrol Volume 1: Brick By Brick in the library system! This is the first Young Animal book I’ve read, but I’ve been impressed with Gerard Way’s comics in the past, especially Umbrella Academy. From what I’ve heard, he’s basically taking the original Vertigo approach and using somewhat forgotten characters and breathing new life into them either through his own pen or others.

As I mentioned when I read Grant Morrison’s first volume of his run, I have very little experience with this team. However, if you’re the kind of reader who can just jump right into a comic and let it take you on a ride, then you should be fine. In a lot of ways, Way feels like one of the few Morrison acolytes who get how to be weird in the right way and not just for weird’s sake. He’s expertly assisted in this endeavor by Nick Derington who’s cartoony style helps make all of the bonkers imagery and beats easier to absorb while also staying wild and dramatic.

That’s one way of saying that I’m still processing a lot of what went on in this book and probably shouldn’t write about it. I did however find myself engaged and properly absorbed to the point where I want more, more, more. Also, given even my limited knowledge of Doom Patrol lore, I really enjoyed the experience of reading a book about a DC team that referred to stories from before the New 52.

They’re grown that world to its own place, but I will always and forever be a kid who grew up reading as many 90s DC comics as i could and then branching out from there. So, even though the Vertigo Doom Patrol series might not fit in with classic post-Crisis DC continuity, at least there’s something out there driving me to read another DC book that’s more than five years old. With that in mind, I do plan on finally reading through all of Morrison’s run, sometime after I finish Alan Moore’s Swamp Thing, though as I don’t want my brain to explode.