Even though this week’s Trade Pile isn’t quite as robust as others, I still wanted to get a few thoughts down on three books that I read this week that I thought were pretty darn spiffy. One set an established character out on his own in a way that really worked for me while the other two featured brand new characters, one set in an equally new world an one rooted in a far more familiar one! 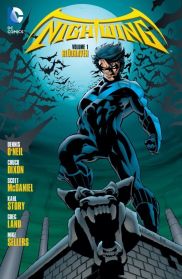 Every now and then, I like to grab a stack of comics out of my To Read box and go through them to see if I want to keep or do away with them. The last batch included some Nightwing issues including a 1/2 from Wizard and an 80-Page Giant. That reminded me that I had the Nightwing Volume 1: Bludhaven book on my shelf and also nearly all of the rest of the series in my collection! So, why not jump into it and see how Dick Grayson’s first real solo adventures played out?

When I started reading Batman, I had a vague idea that Dick Grayson gave up Robin to become Nightwing over in Teen Titans, which made way for Jason Todd and then Tim Drake. It would be a while before I more fully understood the dynamic between Dick and Bruce, which hovers all around this series even when it’s not directly mentioned.

I should probably explain a little more. This book features the 1995 four issue miniseries by Dennis O’Neil and Greg Land and the first eight issues of the ongoing by Chuck Dixon and Scott McDaniel that launched the following year. For me that first mini is good for completists, but not necessary. Sure it’s got the first appearance of the iconic blue and black costume, but it’s also kind of one note and obvious, though the characterization is spot on and the art sure is pretty.

The real goodness comes in those first eight issues where Dick heads to Bludhaven to find out why 21 dead guys showed up in Gotham. While doing that he digs himself deeper and deeper into the muck of this morally bankrupt and hopelessly corrupt city that makes Gotham look like Kalamazoo. I was really impressed at how invested Dixon made me feel in regards to these stories and the surrounding mysteries, most of which I already knew the answers to! I’m not sure what’s going on with this character in the DC Rebirth era, but people seem to love Dick Grayson, so I highly recommend they jump back and check out his first solo outings as Nightwing!

From there I moved on to Ed Brubaker and Sean Phillips’ latest collaboration from Image Comics, Kill Or Be Killed Volume 1. I’m already a huge fan of Bru’s so this was an insta-read for me, which meant I went in totally blind. That’s a great way to go, but if you’re looking for a little more context, this series focuses on a guy named Dylan who kills people because if he doesn’t, a demon will murder him.

That last sentence is probably a solid way to describe the series as a whole, but this particular volume, which collects the first four issues deals more with Dylan coming to grips with this new reality he finds himself in, ranging from questioning his own sanity to figuring out how to get ahold of a gun.

Like a lot of Brubaker’s work, especially with Phillips, this one’s pretty bleak (at least up until this point), but is also characteristically stellar storytelling from these two masters who continue making amazing comics together (see also: Sleeper, Criminal, The Fade Out and Fatale). Like with those books, I’m already hooked and am definitely curious about what’s going to happen in the next volume, which is on the way from the library now!

Finally, I gave DC/Young Animal’s Mother Panic Volume 1: A Work In Progress a read. This one’s the brainchild of Gerard Way and Tommy Lee Edwards who also brought in writer Jody Houser and artist Shawn Crystal to fully realize it. Basically, this book’s about a celebutant by the name of Violet Paige who is also a white-clad vigilante of sorts running around Gotham.

There’s a nice amount of world-building and character development in this first book, but I found myself asking more questions and feeling a little more left out than I hoped. And it’s not a “this book isn’t for me” scenario, I just felt a little lost and hoped to have a little more ground under my feet.

For example, there’s a thing that happens when she fights where bonkers imagery pops up. In the first example in the first issue you see things like a bunny in an overturned skull, a flower with an eye in the center and snake eating a mouse. Even after finishing the book I’m left wondering if those actually meant something or if they were added in like quick flashes in a film to evoke…something.

I don’t mind feeling this way, but I realized that it’s not as fun in an ongoing comic like this as it is in a TV show. In fact, I’m kind of surprised that a medium that so desperately relies on people paying for monthly installments to keep the whole endeavor afloat with go for something along these lines. And I really don’t mean to pick on Mother Panic. I was intrigued and want to read the next volume to see what answers lie within, but it really got me thinking about the way that comics are presented to the audience and how long they run (sometimes without letting the audience know). Like, if this was a Netflix show, I’d know exactly how many installments I was getting. That helps me order things in my brain. With comics though, you often have no idea unless you’re dealing with a straightforward limited series.

I’m realizing that this is probably a bigger thing I need to mull over, but if I was buying these books instead of borrowing them from the library, I’d have way more skin in the game and be far more frugal with purchasing more and more trades. Simply, “huh, I wonder where this is going” probably wouldn’t be enough unless I was deeply sucked in by the first volume.