To say that this Halloween season will be unlike any other is like saying that Leatherface has a unique take on cosmetics. My wife and I are still taking the pandemic seriously (it’s incredibly stupid that anyone has to say that, wear a damn mask) so trick or treating for the kids is all but cancelled. We’re trying to figure out a new way to celebrate, but we’ll see how that goes. Personally, this year will be very different for me because I’ve got a house full of people who want nothing to do with horror movies (or are too young to see them). So, I’m doing my best to squeeze them in where and when I can, but am also focusing on a lot of comics and books. But, I also decided to decorate the shelf in my office with a small army of fiends in action figure form that date all the way back to my childhood!

I attempted something similar last year, pulling out some of my horror movie toys from NECA, McFarlane, Diamond Select Toys, Funko and Mezco. This  year, though, I dug even deeper, pulling from the original He-Man and Thundercats lines as well as DC Universe Classics, Masters Of The Universe Classics and beyond! Want a guided tour? I’m so glad you asked!

Alright, kicking things off we have a delightful pair of Mattel figures. The big green guy is Megator from MOTUC. I had a complimentary Masters Of The Universe Classics membership for a while thanks to my gig at ToyFare, otherwise, I wouldn’t have any of these fantastic figures! I also got WAY into the DC Universe Classics line particularly because the first wave included this fantastic Demon figure. In the foreground you can see Lucas, Dustin and Hopper from McFarlane’s Stranger Things Season One line. Behind them you can see NECA’s Predator (I believe it’s the Ultimate Jungle Hunter) reaching for Jungle Disguise Dutch…even though he’s well camouflaged. On the end there you can scope out the Moore Action Collectibles Buffy figure (which I didn’t even realize was a ToyFare exclusive!) as well as a Funko Pop Morbius bobblehead from the first run of Marvel Collector Corps boxes (another delightful comp subscription I used to have). 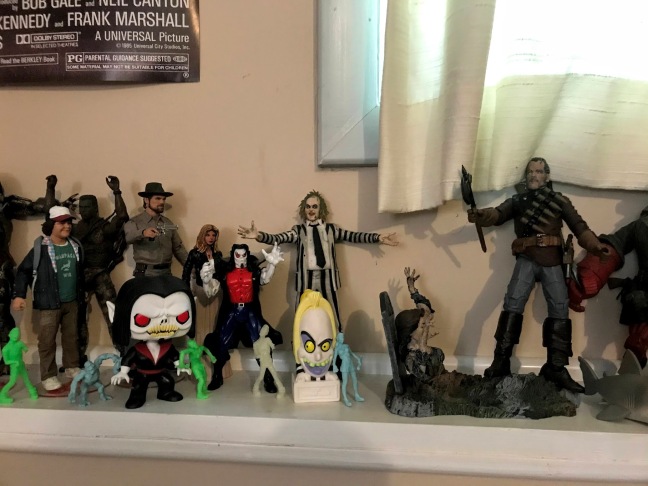 Now you can see the vampire and his slayer a little better as well as the Morbius figure from the classic 90s Toy Biz Spider-Man line. He, Blade, Nick Fury and Punisher were favorites of mine as a kid. Then you can see the fantastic (possibly perfect) NECA Beetlejuice figure standing in front of a giveaway based on the cartoon from Burger King. Now I want to get my hands on a full set of these bad boys. And then you have DST’s take on Van Helsing which comes with a killer base with a vampire raging from her grave! I believe this one is in the Universal Monsters line, but an original design made to fit in that world. You might also notice all of the tiny Army Man-style zombies. Those were sent to us when I was at ToyFare and I can’t seem to nail down where they came from! 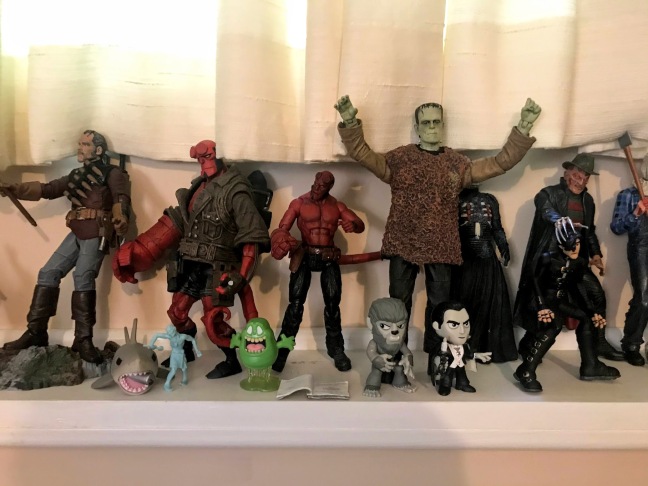 Let’s wrap up this post with one of my favorite sections! Here you have two killer Hellboy figures from Mezco, one based on the comic (another near-perfect toy) and one from the first film. Next to the Rights Hands of Doom you can see DST’s Frankenstein’s Monster as he appeared in Son Of Frankenstein! This might not be the classic outfit you think of when you think of the monster, but the face is PERFECT. Behind him you can just make out Pinhead form NECA’s Cult Classics Hall Of Fame line along with wave-mate Freddy from New Nightmare who seems to have his sites set on Alex from Crimson (a Palisades toy). In front of the big boys, you have a few Funko Mystery Minis including the shark from Jaws (with air tank), Slimer and black and white versions of Wolfman and Dracula from the Universal Monsters set!

If you’ve gotten this far, I’m sure you’ll want to come back for more. There’s a whole family of Jasons, old and new versions of my favorite He-Man monsters, some classic Ninja Turtles villains and plenty of other surprises!