I realized somewhat recently that I don’t write about big time, blockbuster type movies on here very much. Partially, that’s because I haven’t been writing about much of anything, but also because I sometimes don’t feel like I have a lot to say about films of that ilk. For me, this blog doubles as a kind of digital, poorly edited external hard drive for the things I’ve watched or read, but it’s also a way to tip people off to things that are fun. Considering the latter, it might not seem like Godzilla and San Andreas need a signal boost from a guy without a lot of readers, but I really enjoyed both films, so what the heck?!

By all accounts, I shouldn’t have liked Gareth Edwards’ Godzilla film from 2014. His other kaiju movie Monsters didn’t keep my interest when I tried watching it a few years ago. I’d also heard that the big bad himself wasn’t actually in the movie that much which brought up my usual complaint about kaiju films: way too many scenes of scientists talking and not enough monster mayhem.

And yet, I found myself very much enjoying this film. Yes, it involves a lot of scientists talking, but also a great deal of family and heart that drew me in even when Zilla wasn’t on the screen. Bryan Cranston’s a scientist who’s gone full-on conspiracy theory in regards to a potential nuclear-related threat which his soldier son Aaron Taylor-Johnson gets swept up into, especially after finding out it’s real! He wants to stop the giant monster both for the sake of humanity, but also to keep his wife, Elizabeth Olsen, and kid alive. At the same time the fantastic Ken Watanabe tries to figure out exactly what the nuts is going on with science!

But it’s not all feelings and whatnot, there’s also a solid amount of giant monster fights as Godzilla takes on a variety of other creatures who look like they might be related to the ones in Pacific Rim or Cloverfield. I was also quite taken with the scenes of the terrible thunder lizard walking on the sea bottom with all of these naval ships riding astride him. There’s a real, creepy, Jaws-ness to that part that actually made me feel tense in a way that these movies don’t usually achieve.

I’m also very excited to see Kong: Skull Island (which is sitting four feet away from me in a Netflix sleeve) as well as the impending Godzilla vs. Kong movie directed by Adam Wingard You’re Next). Some people aren’t fans of the shared universe thing, but I think it can be done really well and cleverly. From what I’ve heard, that’s the case with these films, so as long as they can keep up the well-balanced mix of heart, drama, mayhem and intensity, I’m in! 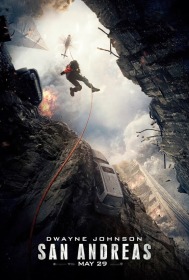 Speaking of tense, San Andreas is packed with nail-biting scenes. This Gary Peyton-helmed 2015 film starring Dwayne Johnson is a fun, exciting extension of the classic disaster films. That’s not a genre I’m super into, but the fact that Dwayne Johnson starred, moved it right up my Netflix queue. He and Peyton teamed for the fun family film Journey 2, plus this one boasts a screenplay written by Lost helmer Carlton Cuse. All good things, all good things.

In the film, the about-to-be-divorced Johnson is a rescue helicopter pilot who finds himself flying around when the big one hits. As buildings start falling, he flies to save his soon-to-be ex played by the always fabulous Carla Gugino. Meanwhile, their daughter — Alexandra Daddario who was absolutely captivating for most of Texas Chainsaw 3D — has joined up with a pair of British brothers to survive the quakes. The fellas follow her because she’s well trained in the ways of survival thanks to her dad.

I was impress by how the film made time for emotional beats like the fact that Johnson and Gugino had another daughter who drowned not long ago. It’s not perfectly handled, but goes a long way to lay down the personal, emotional stakes in a relatable way while the world crumbles around these characters (something that not everyone can relate to). Plus, if that’s not your thing, there’s all of the aforementioned falling buildings and giant cracks in the Earth.

It struck me while watching San Andreas, that there aren’t a lot of traditional disaster movies anymore, yet we see the tropes all the time! Just think about any super hero movie or sci-fi blockbuster you’ve seen in the past decade or so. How many times has an entire city been blown up, destroyed, stomped or uprooted? It happens all the time in the Marvel Cinematic Universe). While there’s definitely some destruction fatigue, I did enjoy seeing a film that focused solely on the disaster action itself.

Peyton and Johnson will reteam for more of that in three upcoming projects: a sequel to this film (hmm…), a third Journey movie and an adaptation of one of my favorite classic video games Rampage! I could say that I’m reserving judgement for both movies, but you can bet that I’ll see both of them, maybe even on the big screen where these films look best.